The Mystery of the Georgia Guide Stones

The mystery of the Georgia Guidestones

Maintain Humanity Under 500,000,000 in Perpetual Balance with Nature

I think this is a message for the survivors of a world holocaust. Certainly it is not suggesting that we go out and eliminate six billion plus people who are currently occupying the planet.

I think the guide stones are just that, a guide for a future society that will "discover" them in a Georgia field someday. After all the books and records have disappeared, the guide stones were built to inform the future humans on how not to let another apocalypse befall humans yet again.

The only messages that will last are those engraved in stones or built like the pyramids to be enduring messages for the future. Unfortunately, the pyramids of Giza and other stone temples did not convey a clear and concise message. The Georgia Guide Stones are very clear and written in several languages. In simple terms, this message should survive. We should control ourselves as to overpopulation as this is what probably will be the death of us and cause enormous damage to our home planet.

The current critics of this message continually try to relate this second line with Eugenics and abortions and some sort of new world order.

Again, it is a guide. In a post-apocalyptic world someone or something will have to let people know that indiscriminately having unplanned babies is a recipe for disaster. What exactly is wrong with improving the health and well-being of humanity?

All babies should be planned and welcomed. The Octomom method is a very poor plan for having and raising children. Remember, if you fail to plan, then plan on failing miserably.

Again critics want to relate this line to the tower of Babel, a biblical story involving a group of people who sought to do this. (Genesis 11:1 - 11:9) The story in the bible suggests that God was not happy with this idea and caused everyone to speak in different languages so they could not understand one another. It also had something to do with building a tower that would reach to heaven.

5 But the LORD came down to see the city and the tower the people were building. 6 The LORD said, “If as one people speaking the same language they have begun to do this, then nothing they plan to do will be impossible for them. 7 Come, let us go down and confuse their language so they will not understand each other.”

Communication is key to building a functioning society. Without clear and precise communication, wars get started. Fights break out. People don't get along if they don't understand each other. So why would God deliberately want people to misunderstand one another?

Perhaps the survivors of our planet will accomplish a unified communication method that won't offend God. It's worth a shot. Perhaps we should call the Georgia Guidestones the "Tower of UN-Babel"

Rule Passion — Faith — Tradition and All Things with Tempered Reason

This one is a no-brainer. Unfortunately, most people in today's society are far from reason, much less, tempered reason.

Protect People and Nations with Fair Laws and Just Courts

This sets up our hypothetical future society for a governing body. There will have to be one. Hopefully, the new living language of communication will determine exactly what "Fair Laws and Just Courts" actually mean. Who will decide?

Hierarchy is a must. There must absolutely have to be a top reasoning body that can look at the big picture. What affects one nation, can and probably will affect another nation. The guide stones spell this out.

How many hubs are based on goofy laws and useless officials? There's a ton of outdated, outmoded and downright stupid laws on the books. If only someone had suggested this guide thousands of years ago! America's stonehenge is telling us to get organized as fast as possible and save ourselves a lot of grief in the future.

How many petty laws and useless officials do you think we could get rid of right now? Probably enough to eliminate the 14 trillion dollar debt in government official's salaries alone :-)

This guide speaks to the concept of fairness in a society. We each have personal rights that are a given. We can live and breathe and seek shelter and food. We can believe in deities or not. We can pretty much do as we like in the sanctuary of our own homes.

The idea of social duties involves respecting the rights of our neighbors. This particular guide is the Golden Rule restated. Treat all humans as we would love to be treated. Why do we have to be told to do this? It's an obvious thing, yet so few of us practice it.

The only problem critics have with this one is the word "infinite". They want the guidestones to actually say something about God. The builder of this monument went by the name of R. C. Christian and religionists see this as a slap in the face. Critics think this monument was built to start some sort of new religion.

They also attribute the Georgia Guide Stones as being built by a Freemason. Some say that R. C. Christian was in reality, Ted Turner, a philanthropist who gave one billion dollars to support U.N. causes. Turner has also supported abortion and population limits although he has had five children with three wives.He is a big supporter of environmental protections.

Turner has had arguments with religious folks and was at one time considered an atheist, but has partnered with religious groups to fight for various human rights all over the world. He is a controversial figure to be sure. There is no mention of him being a Freemason.

If Turner did indeed have the Georgia Guide Stones built, then it is a well kept secret. At any rate, "seeking harmony with the infinite" can only be interpreted as a guide to improve your mind.

This last edict recommends - TWICE - that we "leave room for nature". Nature supports us and enriches our being. Why are humans so hell bent to destroy our planet? Future generations will need a strong reminder to respect our planet.

Especially since by the time the Guide Stones are found again, it will mean that we have destroyed ourselves and our planet.

The Age of Reason

We measure the progress of the human condition by what we call "ages". Six million years ago, the age of hominids began. We went through the Ice Age, the Bronze Age, the Renaissance, the Industrial Age, the Modern Age and probably many more.

The Mayans predicted the Age of Enlightenment to start on December 21, 2012. (12/21/12). Another doomsday prediction that did not come true.

But someday, the Age of Reason will appear and a man going by the name of R. C. Christian has erected a monument in an unlikely location in Georgia, U.S. that will hopefully guide the "Age of Reason".

When will global disaster strike?

I think we all know that some day the humans on earth may become extinct or very nearly so. There is a disaster looming for this incredible population and the planet will someday soon be unable to support us.

Someone or some group have noticed this and taken steps to prepare and repair the world for any survivors. Other groups think of it as the Anti-10 Commandments. But looking at what the original 10 Commandments have done for this world, I say taking a look at some new ideas might not be a bad thing. Follow along fellow humans and welcome to the age of reason.

The Georgia Guide Stones as a Time Capsule

There is space allotted at the site for the burial and conservation of a time capsule. It is unknown at the present time if there actually is a time capsule. So someone is either gathering the items for inclusion in the capsule, or they are waiting until they die to be buried there along with significant items to be recovered someday.

Wouldn't you love to be present when post apocalyptic humans rediscover this amazing site? 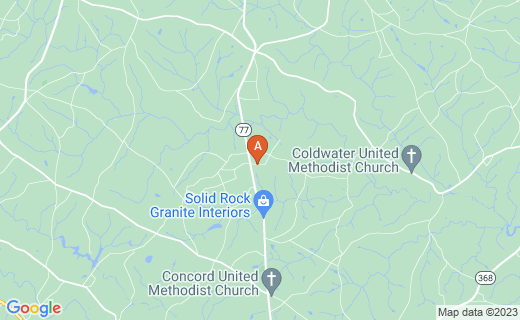 Location of the Georgia Guidestones near Atlanta, Georgia U.S.A.

Comments - What are your thoughts on leaving a monument to the future? What would you put in the time capsule?