The Michael Teachings: The Unexplained Ouija Board Mysteries

Have you ever used an Ouija board?

We are here with you tonight.

One afternoon in the summer of 1986, I leisurely wandered the aisles of a local book shop. In the “Astrology and Occult” section I noticed a small paperback adorned with a very odd cover. I saw an artist’s rendition of three stern figures, dressed in clothing from different eras in time, “emanating” from an Ouija board. In the background were mountains and a full moon. The book was authored by Chelsea Quinn Yarbro and titled “Messages from Michael.” The back cover told of a dinner party where two couples amused themselves with an Ouija board. The planchette spelled: We are here with you tonight. The group found themselves in the presence of Michael, an ancient entity communicating from a higher plane of existence. Michael contacted this group to reveal his truths, and an eleven year exploration into the unknown began. I believed $3.50 was a reasonable price to pay for what appeared to be actual transcripts of Ouija board sessions, and went home to check out my purchase.

It was a slow read, but I was fascinated with the concepts. Michael identified a structure to our spiritual makeup that made odd references to entity fragments, soul ages and cycles, overleaves, and much more. Michael’s teachings seemingly provided rational order to the chaos of existence. It was thrilling to read the words and ponder their larger meaning. I showed the book to several friends of mine who were interested in the use of Ouija boards, and they were equally enthralled. They used an Ouija board on occasion themselves, and this offered a framework for new questions. Their interest in using the board was more than I could muster, but I sat in on some of their sessions and sometimes participated. We spoke with Dan, a spirit who claimed familiarity with Michael’s teachings and could adopt his distinctive vocabulary if we desired. My friends asked many questions about their lives and families, and I threw in a few queries, as well. Just as the Michael group had, we met with questions and furiously scribbled Dan’s answers, to be transcribed later.

Want to know more about the Michael Teachings?

Read more hubs about the unexplained and paranormal

Much has never been revealed about the Michael group and their work.

The Michael Teachings grew in fame, and Chelsea Quinn Yarbro produced three more books over the next 16 years: More Messages from Michael (1986), Michael’s People (1988), and Michael for the Millennium (1995). During that time, other groups began purportedly channeling Michael and titles not authored by Yarbro hit the nation’s bookshelves. A web site for the teachings currently lists 20 books written by authors other than Yarbro. In Michael’s People, the credibility of the “other” sessions and books were gently questioned, but no effort has been made to my knowledge to differentiate from the teachings of the original group and the others that followed. The Ouija board was ultimately abandoned in favor of a hypnotic trance or other forms of channeling, but the information always remained an extension of the concepts presented from the beginning.

Several years later I made a most amazing acquisition. A friend from California who heard about our Ouija board sessions asked if we would be interested in owning some of the actual transcriptions from the Michael sessions. Her father was a member of the first group documented in Chelsea Quinn Yarbro’s books, and she had inherited two huge volumes of transcribed sessions. She did not inherit her father’s interest in channeling, however, and had no real use for them. My friends were eager to peruse some of the original work, and the volumes were subsequently shipped to Kansas.

What we saw amazed us. Similar in style to the paperback books, the original transcripts typed Michael’s answers in all-capital letters. (We had no reason to doubt the authenticity of our newly acquired documents, but this was reassuring.) Occasionally, someone dutifully highlighted or drew boxes around Michael’s comments. There was far more to notice than the typing style, however. The Michael Teachings, unedited for public consumption, shed tremendous light and shadow upon the published works and the individuals involved. We first were amazed at how normal the original group seemed. On the back of one of the typed pages were handwritten directions to a potluck, accompanied by a simple map. The group asked for guidance about typical day-to-day activities—it wasn’t just about the nature of mankind or the fabric of existence. They asked about their parents and neighbors, careers, and even their cars. Michael dutifully answered all questions and sought to link their queries to larger topics.

Eventually the group became comfortable with Michael’s concepts, and their questions were geared toward his thematic structure. Their work became increasingly complex, and the group itself grew in purpose and scope. They struggled not only to integrate these odd teachings into their daily lives, but with how to function as a structured group. They noted in a session the need to charge $10 per month for photocopying, and also discussed becoming a corporation. Initiates were required to have several meetings with older members before attending an actual Ouija board session. Eventually the group envisioned purchasing land and building a community based upon the Michael Teachings.

There were other differences between the books and the original transcripts, as well. Foremost among them: Michael was not the only entity channeled by the group. There are also extensive notes made channeling an entity named “Tomas”, “Crystal” and another named “Soleal”. It was not automatically Michael who spoke with them and many Ouija or channeling sessions began by asking, “Would someone care to communicate with us?” There was never more than one entity channeled for an individual session, but at least once Crystal dropped in to say hello before Tomas took over.

There were also stylistic differences among the channeled entities. Tomas’ teachings seemed similar to Michael’s but the jargon was de-emphasized—references to overleaves, soul fragments and other terms coined by Michael were absent. Tomas seemed more the higher-plane clinical psychologist, offering advice and solutions on a personal level.

Soleal was quite different from Michael and Tomas, though! Soleal lived on a planet 20 light years away and communicated telepathically with the group. Naturally there came talk of Soleal visiting Earth, and he was enamored (if a bit frightened) of the idea of meeting with world leaders. In fact, Michael commented frequently on the methods and practicality of interacting with this alien, and even suggested meeting him at the Oregon Vortex, explaining that each celestial body has a vortex through which planes intersect and can be used for interstellar travel.

The boundaries of the Michael group expanded quickly---perhaps too quickly as the members sometimes lost focus. In Yarbro’s later books, she reconnected with the original assemblage. Many seemed to burn out and wished to get back to a more normal existence. For years their contact with these entities was all-consuming and they seemingly grew tired; or perhaps after channeling for a solid decade, they couldn’t think of anything else to ask. Their recollections of those times seemed wistful in the recounting, as if they lamented the time lost in pursuit of a universal truth.

Neither the original books by Chelsea Quinn Yarbro nor the Michael Teachings group that emerged later has (to my knowledge) acknowledged Tomas, Crystal or Soleal. I attempted to contact the Michael group via email, informing them I had some original transcriptions and asking if anyone had heard of the other channeled entities. I never received a response. My friend from the Ouija board days contacted Yarbro (also via email) and asked the same questions. She responded that the materials provided by the group only mentioned Michael. For the sake of writing a book, it seemed natural to edit out anything overtly personal from the published material. The nature of reality would sell more than discussions about how to stop smoking—at least in the occult section of a bookstore. However, that seemed an appropriate task for the author or her editors, not the group itself.

Were these omissions only for the sake of creating a cohesive book, or are there other mysteries to be revealed? Why was Yarbro only shown transcripts from Michael sessions, with all references to Tomas and Soleal removed? What did they believe Yarbro might do with this information? The notes in my possession are not complete and make no reference to finally meeting Soleal, and eventually Tomas is no longer channeled. The land was seemingly never purchased; the community based on Michael’s teachings never built. Why did they stop communicating with these beings? Why did they abandon their plans? What happened?

Does anyone know? Is there anyone left from nearly forty years ago who can provide an answer? Does the current Michael group know the answers to these questions? What can we yet learn from a group of people that used an Ouija board nearly 40 years ago?

Have you ever used an Ouija board?

Do you believe an Ouija board is dangerous or just a game?

If a friend invited you to join them in using an Ouija board, would you do it? 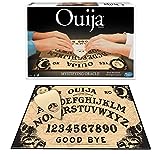