The Miracle of the Sun: Authentic Photos!

Witnessed Around the World

The beautiful images you see in this article are photos of the sun, and they are quite remarkable. The images represent a miracle that was first witnessed almost 100 years ago and continues to occur in different places around the world. Probably the most popular cited case was on October 13, 1917 in Fatima. On this day, tens of thousands of people witnessed the Miracle of the Sun. The people were gathered to prepare for a visitation by the Blessed Virgin Mary, who was predicted to appear to three young children that lived in the village. According to many witnesses, after a period of gloomy darks skies the sun suddenly appeared and produced extraordinary solar activity. It appeared softer than normal, making it possible to look directly at it, and it danced in the sky casting a spectacle of multicolored lights to be observed. This miracle of the sun is just one of the many sightings that have happened over the last hundred years. Still today, there are reports of sun miracles occurring in other Marian sites around the world. In the small town of Medjugorje, for instance, millions of pilgrims have witnessed the spinning of the sun. Numerous testimonies continue to be recorded that describe the occurrence of this supernatural event.

Another significant Marian site is in the small town of Marmora, just outside of Peterborough in Ontario, Canada. In this humble town there is a place where the miracle of the sun, as well as other extraordinary miracles, are witnessed on a regular basis. The site is located on a picturesque farm called Greensides named after its owners. It was established as a place of prayer, for people to come and meditate on the Stations of the Cross in the beauty of the rustic hillsides. On many occasions, there have been large pilgrimages, with thousands of people attending the grounds. During prayer at different stations people have testified to the smelling of roses, visions of the Blessed Mother, indescribable peace and tranquility, as well as spectacular visions of the sun. The photographs included in this article are actual pictures that were recently captured during a pilgrimage visit to the area on Good Friday 2012. The pictures were taken by devout Christian Catholics who go regularly to the site, in order to pray the Stations of the Cross. I feel honored to be able to share these photos and can testify to their authenticity, as they were first observed in the digital camera shortly after taking them. The humble group refer to themselves as a small remnant prayer group and make it part of their mission to witness to the miracles that are happening, for the Glory of Jesus Christ and the Blessed Mother.

The Signs are There!

When viewing the photos of the miraculous sun it is comforting to see how Heaven continues to send spectacular signs to the faithful and those seeking answers. Many people who have visited Marmora come long distances hoping for some insight, and clarity, into their faith. Many people leave feeling totally transformed, renewed, and more confirmed in their belief and relationship with God. As one pilgrim put it, “God made His presence so clear to me today that my life has been changed forever.” Such life altering experiences continue to occur to people who visit the Marmora Marian Site, and the miracles appear to be increasing with more and more pilgrims being witness them. 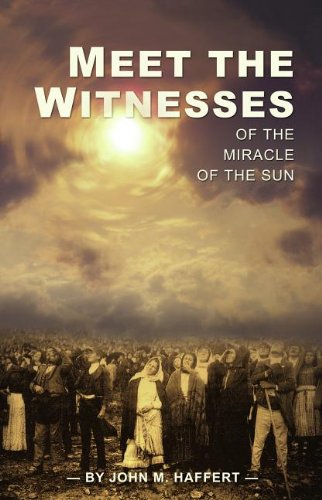 Meet the Witnesses of the Miracle of the Sun
Buy Now

A Personal Testimony of a Visit to Greensides Farm