The Pillars of Iman (Faith)

The Pillars of Islam and Iman
Buy Now

In the name of Allah, the Most Beneficent, the Most Merciful

The 6 Pillars of Iman, also known as the articles of faith, are a portion of the foundation in which a Muslim's beliefs stand on. These pillars are very important and hold heavy weight on the Day of Judgement.

The first pillar is the belief in the All-Powerful, Most Beneficent. Believing in Allah, above all else is the first and most important pillar. Its not only belief in Allah alone but in the way He is described through the Qu'ran and the sayings of Prophet Muhammad (ahadith). This includes all 99 names that describe Allah.

Belief in Al-Malaa'ika (The Angels)

The second pillar of iman is the belief in Allah's angels. The angels are messengers of Allah. They are not his children as some may think. They were created from light and were created, before humans, for the purpose of worshipping Allah. They can also appear in the shape of a man if so ordered to do so. Some of the angels' names, that we know of, are Jibra'il (Gabriel), Mika'il (Michael), Israfil, and Malik. They have many jobs such as guardians, gatekeepers, and Trumpeters.

Belief in Ar Rasul (The Messengers)

The third pillar is the belief in Allah's Messengers. There are twenty-five (25) Prophets mentioned in the Qur'an. These Prophets are: Elishia, Job, David, Dhul-Kifl, Aron, Hud, Abraham, Enoch, Elias, Jesus, Isac, Ishmael, Lot, Moses, Noah, Salih, Shuaib, Solomon, Ezra, Jacob, John, Jonah, Joseph, Zachariya, Muhammad. It is said that there are numerous others leading up to 313. Muhammad is the last and final Prophet and there will be none after he. It is our duty as Muslims to send salaams(the Peace and Blessings of Allah) when mentioning the names of any of the Prophets.

The fourth pillar of iman is the belief in the books of Allah. Here it is the belief that at the time when these books were sent down they truly were a message from Allah. The only book left is the Qur'an in its entirety, because it is the last revelation Allah will send to us. There are four books known to man: The Torah sent with the Prophet Musa (Moses), the Psalms sent with the Prophet Dawud (David), the Gospel sent with Prophet Isa (Jesus) and the Qur'an sent with Prophet Muhammad. We as Muslims are to believe in all of these books and not just the Qur'an.

The fifth pillar of faith in the belief in the Last Day. This is the Day of accounting for all deeds; evil or good, big or small. In our lives we need to believe that all we do will have bearing on the Last Day. No one but Allah knows when this day will come, so it is up to us to live each day as if it was our last.

The last pillar of iman is the belief in pre-ordainment. What this means is that everything in our lives is already written. It is our duty to know that whatever Allah wills will occur. Also He is the creator of everything including our deeds. Allah knows our past, present, and future. Our lives are set, but that does not mean that we strive any less toward perfection.

These pillars are important to all Muslims and should be held in high regard. 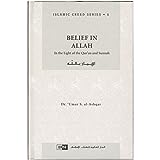 Belief in Allah: In the Light of the Qur'an and Sunnah (Islamic Creed Series, 1)
Buy Now