What are Rudraksha Prayer Beads Mala?

Rosaries made of rudraksha beads are considered to offer profound astrological and health benefits to the user. The rudraksha beads hold a significant place in both Hinduism and Buddhism. You will find many sages and saints with a rudraksha mala (rosary) in their hands. These are used for japa or chanting mantras. Both the mantras as well as the beads are believed to have divine and mystical properties.

Origin of the Word 'Rudraksha'

The word 'rudraksha' is a combination of the two Sanskrit words, 'Rudra' and 'Aksha'. 'Rudra' is another name of Lord Shiva, a Hindu God. 'Aksha' means teardrops. According to Hindu mythology, Shiva and the other Gods united to fight against a powerful demon, named Tripurasur. After a long-fought battle, the Gods finally won and retreated for a rest to the Himalayas.

Lord Shiva then began his meditation for the welfare of all beings. After a long period of time, he opened his eyes and shed tears of compassion. Rudraksha trees are believed to have sprouted in the places where the teardrops fell.

Rudraksha (Elaeocarpus granitrus) is a large evergreen tree with broad leaves. The tree is native to Nepal, Indonesia, Malaysia and parts of the Himalayas. The tree begins to bear fruit within three to four years.

The rudraksha fruit is blue in color when fully ripe. This fruit contains the seed used in making these japa malas. When dried, the fruit becomes black in color. This is why the beads are often referred as blueberry or blackberry beads. 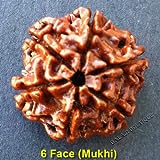 The Making of the Rudraksha Prayer Mala

The beads vary in their appearance and have different number of grooves on the surface. These grooves can vary from one to thirty eight divisions. However, usually only one to fourteen mukhi beads are used to make the rosaries. The most commonly used beads are panch mukhis or with five faces. These are believed to be a symbol of the five faces of Lord Shiva. The 108 beads are worn with a red or gold string.

The Benefits of the Rudraksha

The rudraksha prayer beads mala contains carbon, hydrogen, nitrogen and oxygen. It is believed to have various medicinal properties. When worn against the skin, it has a cooling effect on the body and may help in reducing blood pressure and preventing heart disease. It can relieve stress, anxiety, and depression.

Wearing the rudraksha may improve concentration, mental clarity, and memory. It also seems to enhance the energy and stamina of the wearer. The bead is also believed to have an anti-ageing effect and to prolong life. 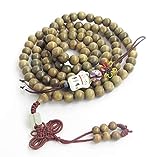 How to Use the Power of the Rudraksha Beads

Some people prefer wearing the rudraksha japa mala as a necklace around their neck, close to their heart. The beads can also be worn on other parts of the body besides the neck. The number of beads will vary depending on which area of the body you plan to wear it.

Keep in mind that the rudraksha necklace is different from the rosary. It should be worn during the day and taken off during the night. The mala should be stored in a clean place and its sanctity should be maintained as much as possible.

The rudraksha japa mala is often used in meditative practice by yoga practitioners. Chanting a mantra 108 times using the rosary is a common way of achieving spiritual gains. While chanting one should sit in a comfortable position with eyes closed and the back straight. The thumb is usually used for rotating the beads while chanting. Using the pinky and the index fingers is considered to be inauspicious. So, make sure not to use these fingers.

If you are sitting in a cross-legged meditative position, just place the japa mala on your knee. However, make sure that the rosary does not touch the ground. You can also hold it near your heart.

Also, while chanting, 108 is the auspicious number. So, if you are using a 27 beads mala, make sure to keep reversing the direction of your counting until you reach the required number of 108 times.

While buying a Rudraksha prayer bead mala, make sure that to buy from reliable stores. There are many stores selling fake prayer beads and these will not bring you any physical or spiritual health benefits. Just remember that a real bead never floats on water and boiling does not have any effect on the real one.

Now that you know how to distinguish between a real and fake rudraksha bead, take a look at some of these malas and beads available from the trusted Amazon store given in the side. Here you can rest assured that the beads will be real and not fake.

Now that you know about the benefits of the rudraksha prayer beads mala, make sure to buy one for yourself. Whether you wear it around your neck or waist or use it for chanting during your meditation practice, one thing is for sure. These holy prayer beads will surely bring a change in your physical, mental and spiritual health.