Today, the Sathya Sai Movement is officially present in more than 165 countries and unofficially present in all the nations in the world. And everyday sees a new activity, every month sees new initiatives and every year sees new projects being undertaken by devotees of Bhagawan Sri Sathya Sai Baba the world over. In that light, a new Sai Center is not a fantastic thing to be written about maybe. But what inspired me was the fact that this new Center has been set up in the world's most populous country - China. Located at Jieyang, in Guangdong, Southern China, the Sri Sathya Sai Baba Center being erected, consecrated, inaugurated and being opened for the people of China is indeed a very special and landmark building as I see it.

And here is why. The freedom of religion in China is provided by the government with a very strong and important caveat - that the government will protect only ‘normal religious activity’. The definition of such activities is quite narrow and restricted, covering only those activities which take place within government-sanctioned religious organizations and registered places of worship. In fact, the only officially sanctioned religions of China are the Chinese Islamic Association, Buddhist Association of China, Taoist Association of China, Chinese Patriotic Catholic Association and Three-Self Patriotic Movement.

The degree of ‘protection’ afforded to these 5 officially sanctioned religious organizations too is limited and strictly regulated by the State Administration for Religious Affairs. None of the other religions, cults, gurus or masters have been given ‘registered houses of worship’. Though there are many non-sanctioned temples and churches, they have not been approved or protected by the government.

In this scenario, the People’s Republic of China permitting the construction of a full-fledged Sai Center is really a victory of pure and selfless love of Sri Sathya Sai. China has always been considered as an ‘officially-atheist’ country. All the members of the officially atheist Communist Party are strongly discouraged from even holding religious faith. But as far as Swami (Bhagawan Sri Sathya Sai Baba) is concerned, there is only one difference between true theists and true atheists.The true theists consider God as Love while the true atheists consider Love as God! Does He not sing Prem Easwar Hain, Easwar Prem Hain.

In the pictures that follow you will see this beautiful Center. It has photographs of Swami and Shirdi Baba too. For me, personally, this is yet another proof of the universality of my beloved Master who always says,
“I have come to light the lamp of love in your hearts to see that it shines day by day with added lustre. I have not come to speak on behalf of any particular spiritual practice or Hindu philosophy. I have not come on any mission of publicity for any sect or creed or cause; nor have I come to collect followers for any doctrine. I have no plans to attract disciples or devotees to my fold or any fold. I have come to tell you of this universal faith, this divine consciousness, this path of love, this philosophy of love, this duty of love, this obligation of love.”

The 'special' photo that a devotee described

My personal sense of thrill

Different people find different reasons to be happy with this news. One reason why I felt very thrilled and happy was that one picture among the many on the walls in the center is striking in its uniqueness. In fact, a devotee posted this picture as "a special picture of Bhagawan". Imagine my great delight when I saw that it was a photograph that I had taken long ago, 2002 to be exact, when I was a student at Whitefield, Brindavan, Bangalore! The picture had been taken on Trayee Day when I had procured a new lens for my camera.

I have no idea how that picture reached there because I have not released it into public domain. Only a few copies have been specially made for use in some places. I just felt thrilled understanding that when it comes to Swami's glory and majesty, there is no explanation - nobody can 'stem' or 'control' it! It was due to the photo that I felt a part of myself in this beautiful center!

Ever since this article was written, I have been getting many requests for the exact address. All my efforts in procuring the same too had been futile. Thanks to the efforts of a devotee who was blessed to visit this center, the details are now available.

The Sai center is located in the town of Fung Shun. This town is about 40 kilometers from Jieyang which is the nearest airport. The town is situated in the Guangdong province of Southern China. The nearest city in this region is Shantou, a little farther from Jieyang town. Hope all those travelling to China will be able to enjoy a stop at this 'Prasanthi Nilayam of China!

Fengshun is about 40 kilometers from Jieyang 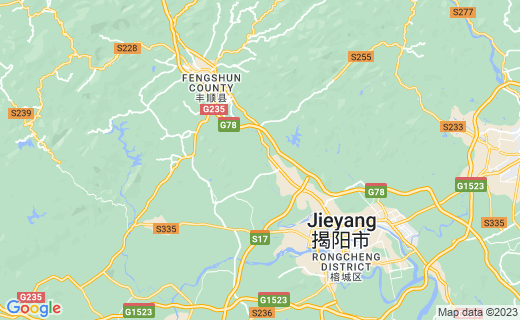 The experience of a devotee...

The devotee who was kind in providing the details, also had this to narrate:

"This town Fung Shun,is located in the Guangdong Province in the southern China which is one of main industrial belts of the country.Each town in this area has some specialty. While one has electronic circuit-board manufacturing factories, another produces cookware while and the neighboring city has a few thousand factories only for making Jeans!. The labor from the Northern provinces comes the South for work. The workers work all round the year and go back to their hometowns only once annually - for Chinese New Year.

Since a native from this village is a devotee of Swami he started a small prayer hall for Baba about 8 years ago and a couple of hundred people have been attending the weekly prayers. They have their own bhajans in Chinese. They are attracted towards Swami’s mission since it is more spiritual in nature and not a religious organization. Swami has all along emphasized that a man has to live with righteousness, honesty and as a person with love for fellow human beings and helping them as much as possible.Swami never advocated adherence to any particular religion or faith and was of the view that all religions are good and same and have different ways to reach God.This philosophy is probably appealing to these people whose exposure to religious activities and beliefs is not much.

However, the Chief of that town governing council who played a major role in establishing this Centre by obtaining permission from their Government told me about his personal experience.

Once they were taking a person who was critically ill to the hospital. It was midnight and they managed to only find a motor cycle for transport. Unfortunately, the motor-cycle stopped on the way. This gentleman prayed to Swami and all of a sudden "a hand" appeared and accelerated the vehicle and it started moving and they reached the hospital.He admitted the patient in time and saved his life. After they reached the hospital, the motor-cycle stopped working.Till this day, he is not able to explain who came to their rescue. He says it must be the beloved Baba!

The other gentleman who looks after the Centre had a chronic stomach ailment and after he visited Puttaparthi few years ago it was gone. He says that he visits Prasanthi whenever he has any problems. He says that Swami also saved him from a stroke once."

1. Seek God and the rest will be conferred upon thee.

3. The rainbow hues of Swami's laughter.

4. The beautiful birds of Puttaparthi.

Since HubPages is very strict about plagiarism, if you use this article, or its part thereof, anywhere on any site, please also post the source link along. If it is only the photos you want to share, please go ahead freely and do so as you please. Thank you. :)

Else, you could bookmark the articles profile page.