The History of Irelands Famous Leprechaun: Including a Funny Little Fable

Gabriel loves to write stories: long; short; funny; sad or scary. As long as there is an opportunity to create a story.

The Beginnings of The Leprechaun

The legend of the Leprechaun begins with the end of the Tutha De Danann or 'The people of The Goddess Danu'. These mystic people arrived on Irish soil to rule as Kings and Queens (some say gods and goddesses). They're true origin has lapsed to many lands; Heaven being among them.

These magical people where lead at one time by Lugh the long armed warrior. He fought many fights using the rainbow as his sling shot. One such fight resulted in these wondrous people being driven underground where some say they still exist today. The Tutha De Danann where mortal souls with supernatural powers. Legends say they lived very long lives and evolved to survive submerged in the earths crust. Although other stories tell of how they mingled with lovers above the ground and married happily outside their supernatural families.

It is believed that the Leprechaun is non other than a descendant of these magical mortals and perhaps is the direct son of one such marriage. Of course it is quite the possibility; The Tutha family lived above the ground and used their magic to deceive the eyes of their human counter parts; making them seem human.

The Tutha De Danann were intelligent, fairy type people. These ancient rulers of Ireland are the race most associated with historic megalithic sites of Ireland. Stories of their love for music, magic and poetry only mirror the dancing singing Leprechaun as we know him today.

The Leprechaun a fairy type fellow loves music. Especially the harp and the tin whistle. He's quite the trickster too. His shenanigans and playfullness sometimes give him a bad name, but he's a jolly chap and only plays mean when he's goaded to do so.

A Great Movie if You Love The Little People: a fabulous fun movie with heart warming wit

How I Caught A Leprechaun

The little bugger ran like the devil was chasing his tail. He'd obviously had a spell there, for the speed of his little legs were but a blur before my eyes. I darted behind a big old tree. An oak I think (never paid much attention in class). The bark was wide, and I could hide and watch that crazy dwarf. With a bit a luck and a little charm I'd catch the little fella and be filthy rich. He'd lead me to his pot of gold and I'd laugh myself sick and buy all the pink bubble gum in Murphy's store and probably some chocolate for ma! That'll teach stupid old Mr Flanagan for giving me lines. I never even said a word!

A sudden rustle to the left of the tree, jolted my thoughts back to the little man. I peered around the tree trunk. To my disbelief the mischievous prankster was sitting on the forest floor among the autumn leaves. His back to the tree, he sipped from a bottle and giggled like a hyena.

He wore a large green top hat. A bit battered, with a silly gold buckle planted in the centre. It lipped a little to the right. His chubby belly clothed in a green tunic sported an old ugly leather apron. His belly went up and down, jiggling as he laughed.

I gazed at this creature, in true amazement. I had heard stories about such a chap. Many times my grandmother told tales of a magical cobbler. He made the most beautiful shoes for the fairies. Delightful slippers made from every colour of the rainbow. Each and every pair sparkled as if a single star had been sown into their very soles. I looked at the little fellas feet. He wore fine boots with a pointed toe. No sparkle though.

I held my breath and moved silently toward him. One inch more and he was mine. A little further and whoop!

''Gotcha!'' I yelled triumphantly. The little green man turned his face up to mine. An old mans face with twinkling eyes and a playful grin.

''It's you that I have, and now where's the gold?'' I asked, feeling chuffed. I'd caught myself a real live Leprechaun, or as my grandmother calls him ''The Little Leipreachán''...

I knew from my grandmother's stories, not to take my eyes of this fella. Leprechauns are notorious tricksters and while they have to tell truth; they mislead you with practiced ease.

''Show me your gold,'' I repeated, my knuckles turning white as I gripped the collar of his green tunic.

''Ah! sure ya know where it tis.'' He chuckled his lips returning to the bottle.

''What's in there?'' I grabbed the bottle and sniffed.

''A little ole potato water for the thirst,'' he replied, his eyes twinkled marvelously.

I was feeling pretty thirsty. What with writing all those lines for talking in class and catching this vagrant. I looked at the liquid in the bottle. It looked like water. Hell! now I felt really thirsty. I lifted the bottle to take a drink.

I scolded at him and drank till I finished his water.

I hauled him up by the scruff of the neck, only to realize I was nearly strangling him.

''Ouch, I can't touch the ground,'' the Leprechaun shrieked. He barely stood at three feet.

After what seemed like the never ending journey we arrived within sight, of the end of the rainbow. My eyes where getting really tired and I was struggling to keep my eye on the little chap. His green clothes were fuzzing with the greenery of the wood. I knew if I took my eye off him he would disappear in a puff of smoke and so would all my bubble gum.

''What about three wishes instead of the gold?'' he asked.

''No, I'm well informed of your games. I told you to take me to the end of the rainbow, and you must as Leprechauns can't lie, so there.''

A sudden ray of multiple light shone brightly across my eyes. I lost my grip on the Leprechaun. He shot out of reach.

''Go, I don't need you anyway. I have my gold at the end of the rainbow,'' I laughed. Shielding my eyes from the dazzling colours.

''True you have the end of the rainbow, but ya don't have a penny ter your name,'' the Leprechaun howled with laughter, rolling around on the forrest floor.

Aghast, I looked and realized no pot of gold sat waiting for me. ''You can't lie.'' I cried.

''There's two ends to a rainbow child, and I think my potato water gave ya a dizzy head. Tried ta warn ya, tried ta warn ya,'' chanted the Leprechaun.

There was an almighty puff of green smoke, and the next thing I knew, I was flat on the ground face down. I opened my eyes, putting a hand to my head and tried to sit up. My head was thumbing and weirdly; all I could think was how I couldn't stand the very thought of pink bubble gum... 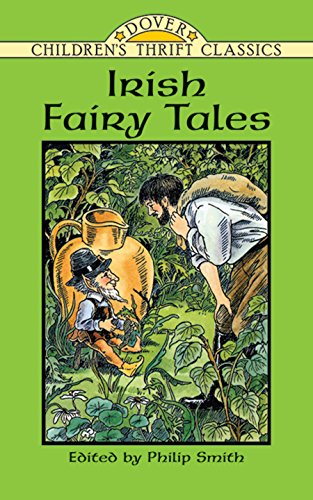 The Traits of A Leprechaun

The Leprechaun is a favorite character of Irish myth and legend. He's quite the main star in many movies and novels alike.

These funny fellows have many attributes and will often adopt a family to the extent of abandoning their natural habitat to move in to the family home. They will enjoy playing their games of hide and seek with the belongings of said family. They are merry fellows and only cause havoc when riled.

They don't like to be played and can play nasty tricks if they feel justified. They will be devious when it comes to guarding their precious gold. They work hard to earn it and some fellows also guard generations of family gold.

Their mischievousness and love for a tipple make them fun fairy folk. The old potato water, ie poteen (an Irish alcoholic drink made from potatoes) is a firm favorite. They love nothing more than a fine old time, taking to the dance floor (well forrest floor) to perform a famous Irish jig.

Solitary beings at times; normally when they are busy making fairy shoes. They do like gifts so if you keep losing socks and there's never any milk left in the morning or the whiskey seems watered down. You may have a new resident, about three feet tall.....