The Magic Door in Rome

In Italy in the corner of a central park in Rome sits a strange monument consisting of a cemented doorway and two standing stone statues. It has a long and curious history.

Alchemy is a philosophical and proto-scientific tradition practised throughout Europe, Egypt and Asia. Its main aims were to purify and perfect certain objects such as the transmutation of base metals, e.g. lead, into noble metals, particularly gold; the creation of an elixir of immortality; the creation of panaceas able to cure any disease and the development of an alkahest, a universal solvent. In Europe, the creation of a philosopher's stone was connected with all these projects.

The study of sciences in early times was often conducted in secret, the inventor Leonardo Da Vinci writing in the 15th century famously hid his writings in notebooks written in reverse handwriting to ensure his work remained hidden.

In the 1600's a group emerged dedicated to the secret study of alchemy, science and astrology. The secret society was called the Rosicrucian Order their symbol a pointed Rose, represented a secret knowledge that was shared only with a small circle of initiates.

They published three anonymous manifestos that described an allegorical-mythical, founder called Christian Rosenkreuz who had returned from the Middle East with a secret knowledge probably based on Sufi Mysticism.

The movement became popular amongst different circles in Europe as they attempted to reinterpret ancient texts to reveal new: "esoteric truths of the ancient past", which "concealed from the average man, provide insight into nature, the physical universe and the spiritual realm."

The group mixed beliefs in Esoteric Christianity and interests in written passages from the fields of Kabbalah, Hermeticism, and Christianity. These ad hoc secret assemblies would later form a precursor movement to modern Freemasonry.

The Group's main manifesto Fraternitatis Rosae Crucis was published in 1614 and translations started arriving in Rome in the mid-1650's. One of the societies pledges was that members would meet up at a meeting place once a year. 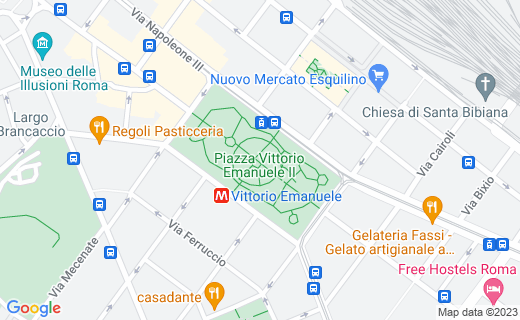 Today the much older monument itself now sits in a somewhat seedy area in a public park that was developed in the 1880s's, it's fenced perimeter virtually matching the dimension of the original villa grounds. It can be reached via Metro A using exit Vittorio Emanuelle.

In Rome, a small circle formed around the wealthy and powerful Marquis Massimiliano Palombara (1614 - 1680) using his large gardened Villa as a rendezvous point.

The Marquis organised the construction of his personal residence Villa Palombara located on the ruins of the ancient Esquiline Hill, near Piazza Vittorio to include numerous references to Rosae Crucis. The Villa was a sort of working proof and a reflection of his interests.

It originally had a number of entrances, including the famous Porta Alchemica or Porta Magica: also known as the Alchemy Gate or Magical Portal, all built between 1678 and 1680. However, this monument was part of an elaborate set of five former gates engraved with odd hermetic symbols that made up a complex puzzle of diagrams and drawings, this one the only one which remains today. The grounds of the estate were large, spanning from the modern day area which now extends from Santa Maria Maggiore to Viale Manzoni.

Perhaps due to the numerous pictogram puzzles on the doorway entrance, the story of the Marquis and his life has since taken on a legendary status. It starts with activities that took place in the small laboratory in the garden of the estate.

Four individuals would become players in this strange story and change his life forever.

According to a story compiled in 1802, a weary traveller identified later by some as the medieval chemist Giuseppe Francesco Borri, also known as Giustiniano Bono, came to the garden in search of a herb capable of concocting gold. After searching in the garden he locked himself inside the villas laboratory.

According to the legend the next morning he was seen to disappear forever through a door but left behind a few flakes of gold and a paper full of symbols and equations describing the ingredients and the process required.
The Marquis finding the written texts but at a loss to explain thier meaning had these symbols engraved on the five gates of the Villa Palombara and on the walls of the mansion, hoping that one day they would be translated.

It is clear today that the monument makes reference to symbols and subjects that even today are somewhat opaque and mysterious but each of the symbols refers to a planet and possibly a corresponding mineral or a metal. However historically in a wider context reflecting subsequent history the monument and symbols can be considered to show the link between Pitagoric philosophy and the Holistic vision of Alchemy.

In short the symbols of the Magic Door concentrate the entire Alchemic Vision. Of note to modern day researchers is engraved cryptically at the base of the doorway, a palindrome sentence in Latin which reads: "si sedes non is non sedes is" which can be translated as "if you sit down you don't go anywhere".

Looking back through the lens of time the legend has many elements and features that ring true but to understand more one needs to look at four main figures that lived in Rome during that turbulent time and were within the Villa Palombara circle.

Palombara looks at the door.

The main Character in the legend, it is not clear when or if the Marquis joined the Rose Circle Group but he had completed the manuscript book of verses, the La Bugia in 1656, writing it as a proof of his knowledge of the whole Opus Alchemicum a training that was gained without the need of wealthy patronage. The villa itself both hosted meetings and contained the lab an essential tool for the Alchemist to study the sciences.

He was already a powerful figure within the city of Rome and was Conservator of Rome between 1651 and 1677, a Conservator was then a sort of independent Judge figure chosen by the Pope to act for or represent his authority to defend the rights of Universities, the clergy and the poor all within a specific diocese.

He was a well-connected person within the city but a pivotal point in his life appears to be when he was introduced by Francesco Maria Santinelli to Queen Kristina of Sweden in December 1655. He appears to have already been one of the initiated Rose members but she would latter become a lifelong friend and one of several of the powerful allies busy steering power in Rome at that time.

Francesco Giuseppe Borri seems to have worked across both the Swedish Queen's and Palombara labs during the years he lived in the city.

A skilled cryptographer, and code breaker. The appointed Vatican protector to Queen of Sweden Christina within the Catholic Church. An extremely powerful figure and "fixer" who was rumoured to have influenced the selection of the then Pope. He was instrumental in helping Queen Kristina purchase her own villa residence and set up her personal alchemical laboratory.

A polymath and early scientist interested in magnetism and now credited with inventions that included the megaphone and an early user of basic microscopes. He rightly observed that infectious disease was caused by microbes.

An academic who taught across Rome, he was also an expert on the hieroglyphic writing of the ancient Egyptian language, Giuseppe Borri was his pupil.

The exiled abdicated tomboy Queen of Sweden who had secretly converted to Catholicism and arrived in Rome in December 1655. An enlightened individual who was a counterculture figure, influential thinker and a wealthy benefactor.

A hyperactive personality and avid reader with a vast library and art collection. Extremely powerful within Rome she received the protection of the Pope despite quarrelling with two in succession. It is possible that she was a figurehead within the secret Rose movement in Rome at that time.

She had a large entourage of individuals working for her including one Francesco Maria Santinelli (1627-1697), a dancer and acrobat who appears to have introduced the Queen to Polaombara. Giuseppe Francesco Borri also worked in Christina's own villa based laboratory experimenting with alchemy while Decio Azzolino was a frequent visitor. She died in Rome from complications due to Diabetes.

The well-known practitioner of alchemy, he was born in Milan in 1627 and was a Jesuit scholar taught by Athanasius Kircher. As a young man, he proved to be a difficult pupil and was soon expelled from the seminary and began working as a wondering doctor and Chemist. Caught up in the Pilgrim processions at that time coming to Rome he eventually met in 1653 Massimiliano Palombara and was hired to work in his lab.

A member of Rosicrucianism order, he developed his own world view seeing religion as part of scientific investigation. Alchemic studies that would place man in a new Golden Age.

Both Palombara and Borri were acutely aware of the dangers of secret knowledge and experimentation. According to the legend, it appears that the two men quarrelled perhaps due to Palombara's boasting talk and his wanting to have a more central role in the society that later provoked rebuke with Borri eventually fleeing to Switzerland. After numerous adventures, he later reappeared in Amsterdam but faced with mounting debts and loss of patronage his luck ran out and he was caught while attempting to reach Turkey. He eventually died imprisoned in the Castel St Angelo Rome in 1695.

To the modern reader, it may seem strange to see all the secrecy and hidden meaning that existed at that time but It is hard to underestimate the atmosphere of fear and paranoia that existed in Rome and Naples in the 1600's, Alchemists worked in secret. At that time rogue chemists were selling quack remedies, potions and poisons. One of the strangest was Aqua-Tofana a slow acting poison made mostly from Arsenic that was often used by wives fed up with their troublesome husbands. The poison's effects were slow and deaths could often be blamed on other maladies without suspicion. The composer Mozart famously claimed to have been poisoned in this way.