What are UFO Sightings? Results from Investigation of UFO Reports.

But what on Earth (or off) are most UFOs?

UFO Sightings are numerous throughout the world, and UFO reports are filed every single day. With the current social explosion of networking and connectivity on the Internet, UFO Videos are uploaded and shared worldwide almost in real time.

Ufologists and UFO Field Investigators are the people who respond to these reports and attempt to use deduction and logic to study any objective and observable evidence.

Ufologists seek to identify the unidentified.

The study of Sightings of Unidentified Flying Objects and matters related to the so-called UFO Phenomenon as well.

This can include any number of subjects, most of which fall under Paranormal or even Pseudoscience. While most scientist UFO Sightings Field Investigators, like the ones trained under MUFON - the Mutual UFO Network - try their best to be dilligent in their research and investigation of UFO Sightings, the reality is still that Ufology is placed alongside subjects for investigation such as:

And yet, those of us with science backgrounds continue to work in a field where we're forced to sit back on a bench with the same people who are sifting through the forrest looking for little Irish dwarfs with a Pot-o-Gold at the end of the Rainbow - or perhaps some Lucky Charms.

They are magically delicious

Have you ever witnessed an Unidentified Flying Object? 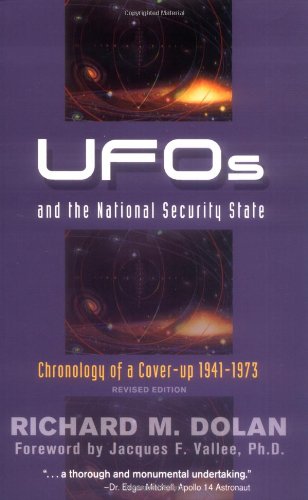 UFOs and the National Security State: Chronology of a Coverup, 1941-1973
A two-volume set of the national security issues regarding the UFO Phenomenon. Time Period: 1941 to end of 20th Century.. Sources include: hundreds of declassified documents, the author focuses on US military intelligence matters. Here he proves without a doubt that at the very least: these organizations take UFO Sightings so very seriously, and why would they do that if they didn't believe in UFOs?
Buy Now

Identify that which is Unidentified

And yet, with all that fantastic footage in that compilation of rather famous UFO Sightings in recent years, the vast majority of those UFOs are caused by Natural phenomena, part of the wonders of weather and of Space, and others may very well prove to be man-made.

"When someone files a UFO Sighting Report

, to the Mutual UFO Network at MUFON.com, a telephone or email interview or a bit of leg work is usually all that is applied to most cases. There are hundreds of Sightings reported to MUFON each month, so you can see that there aren't the resources for a Full Investigation of every report filed.

It's the really strange, famous or highly publicized cases that get the most attention from the UFO Field Investigators, and that doesn't apply to
Most Modern UFO Sightings.."

Often Weather Is Mistaken for a UFO Sighting

What are most UFO Sightings found to actually be?

Most UFO Sightings are cases of Mistaken Identity.

Reported to MUFON - the Mutual UFO Network - and then investigated by UFO Field Investigators and Ufologist Researchers, it has come to the attention of UFO Researchers that usually UFO Sightings can be attributed to the following types of phenomena:

Yes, the stars in the sky get reported as UFOs very often.

Probably the most common and easily avoidable mistake.

Yes, the moon (especially on a cloudy night) is frequently mistaken for something other than the normal planetary satellite we all know and love so much.

The weather can produce some strange effects - such as Lenticular Clouds (cell or UFO-shaped clouds), which cause a great number of the reports of UFOs across the world. Another example of weather phenomena is the reflection of a strong light source on the underside of clouds, where the light source is actually just over the horizon and out of sight for the observer. This can be confusing at first, but it's an easy mistake to make.

Most UFO Sightings involving actual aircraft are when the witness does not recognize the configuration of it. There are many aircraft that do not conform to the normal small or large-sized aircraft for crop-dusters or for commercial airlines. Many have strange wing shapes, and many make sounds that aren't as familiar as the commercial craft - but there are thousands of these kinds of aircraft in the United States alone. They aren't aliens, but rather they are simply oddly shaped or colored private aircraft.

Once Classified: Caused many UFO Reports

What are Most UFO Sightings?

I love the example of the Stealth Bomber or the Blackbird. They both were classified as "Top Secret" for almost a decade before the US did admit their existence and use in military matters. That means that for those 8 years or so that when they would fly, if they were ever spotted by anyone (pilot, passenger or person on the ground even) then they were certainly very unfamiliar Sightings indeed.

One of the most common types of Sightings is the Black Triangle UFO Sighting. Read my Report on Black Triangle UFO Sightings. I feel confident that a great many of the current Triangle Sightings are actually the current incarnation of whatever Stealth Technology has come about since the Stealth Bomber and Stealth Fighter - both of which are derived from 1970 and 1980s technology. So what have scientists come up with since then?

My bet is we're steadily moving from "stealth technology" to "cloaking," but that sounds a bit more Science Fiction than Science Fact, doesn't it?

UPDATE: My research has proven that the USAF has full Light-Cloaking Technology. I'll make a hub about it, but here's a link to my research on Invisibility Technology.

This is an unpleasant truth regarding the UFO Phenomenon: there are a number of people that enjoy creating fake UFO Sightings, hoax Crop Circles and liars that create UFOs in programs like Adobe After Effects and create YouTube UFO Videos that have no business being put online and labeled as Real UFOs. But they are.

And people believe them and fall for the phoney UFOs every single day. I will be putting together a Hub on UFO Fakes and Phones soon, as this grows to be an even bigger problem the more search for UFOs online. There's money in creating the hoaxes, and that simply brings in more competing hoaxers.

...which finally leads us to my absolute favorite type of UFO Sightings, which are those that can only be labeled as:

These could be anything from biological entities to perhaps probes or even, yes, living beings operating craft inside Earth's atmosphere - it's possible, though it's highly improbable. We don't know what they are, but they are usually 5% or less of reported UFO Sightings.

These are the ones that were probably behind the mysterious Foo Fighters in World War I, the rumors of Grey Aliens over the decades and behind the major Real UFO Sightings and UFO Crashes of the 20th and 21st Centuries.

If anything is the result of actual engagement by Intelligent Extraterrestrial Life, it will be this type of UFO Sighting. It's the one type that most inspires the entire UFO Phenomenon.

Will you rate this Hub here on HubPages?
Is it worth all five stars?

Rate this Hub on HubPages

Where to Report a UFO Sighting