What is the Mayan Hunab Ku?

Like all of the religions in all of the cultures of Earth, the Maya also had no name for a supreme creator god. The closest they came to the concept of a creator god was only a symbol representing something that none could pronounce.

The Galactic Butterfly represented the souls of all that had lived before and all that will ever be. The Hunab Ku was a symbol of the universal "all". In some ways it resembles the Asian concept of Yin and Yang - Good and Evil - Male and Female. In other ways the Hunab Ku represents the galactic center of the Milky Way galaxy.

On December 21, 2012, the Sun will be in total eclipse between the Earth and the center of the galactic plane (or center) of the Milky Way Galaxy. This amazing lineup occurs every 5,125.36 years on the Winter Solstice.

The exact date is predicted by the Mayan calendar.This date has also been recorded for past events of the same magnitude.

In an even greater demonstration of Mayan engineering, the Great Ball Court at Chichen Itza is perfectly aligned with this eclipse! How did the Mayans build a stone monument that will last though the ages that is so completely aligned with a celestial event that only happens every 5,125 years? 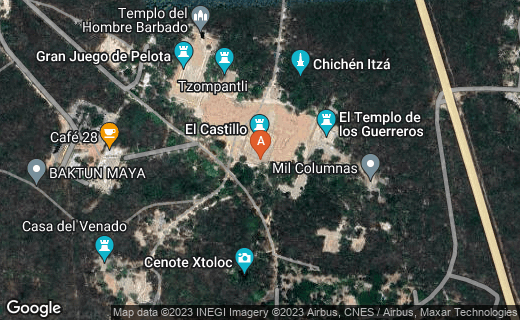 The temple of Kulkulkan (The Feathered Serpent) is found here along with the Great Ball Court and many other archeological wonders.

The Ball Court at Chichen Itza

The Galactic Eclipse of 2012 will be a magnificent event. The Mayans predict a new epoch beginning on December 21, 2012. The age of Reason and Enlightenment begins. It is NOT the Mayan Apocalypse or the end of the world as we know it.

The Hunab Ku is a representative symbol of the sun's eclipse of the Galactic Plane. As the sun passes between the Earth and the center of our galaxy, the light of the sun and the vast dark spaces of the Milky Way will seem to merge together marking a new cycle that will last another 5,125 years.

Perhaps some universal energy will be strengthened by the precession of our solar system. Perhaps the Mayans recorded these details in the temple of Kulkukan at Chichen Itza. The temple itself is literally a "star map" and extremely large calendar. The pyramid acts like a giant sundial marking the days of the year with specific steps and shadows.

Mayan tattoos. Jewelry with the Hunab Ku symbol is going like hot cakes. Wearing the Mayan symbols endorses a metaphysical power symbol, or so some believe, that will protect the wearer against the end of the world on December 21, 2012.

Accordingly, I have designed several Aztec and Mayan products for the shopping public via my stores at CafePress. The Mayan

For more complete information on the Mayan and their culture:

Mayan Civilization: A History From Beginning to End
Buy Now

Comments - Please let me know if you wish to join our group at the big event. We have a FaceBook group for you to join.