Which Christian Denominations Still Use Incense in Worship Service, When, and Why

Incense is made from resins and gums of specific plants, which when burned, produces fragrant smoke. Historically, just about every culture has used it for medicinal and spiritual purposes. Native Americans, for instance, used it in healing and purification rituals. Documented evidence also indicates that incense, especially frankincense, was an important trade product for 1,500 years among ancient Persians, Assyrians, Egyptians, Babylonians, and Romans. In fact, it is noted that they valued it more than gold and silver.

The Old Testament section of the Bible, also known as the Hebrew Bible, have many references about incense being used as a significant aid to get God’s attention and invite God’s presence. The following examples are from the New Revised Standard Version Bible. In the Book of Exodus 30:1, Moses, with direction from God, tells his fellow Hebrews, “You shall make an Altar on which to offer incense…” The Book of 1 Chronicles 28:18, David speaks to his son Solomon about the Altar of incense. In Psalm 141:2 David speaks again saying, “Let my prayer be counted as incense before you…” The Book of Malachi 1:11 the Lord says, “…and in every place incense is offered to my name…”

Since Christianity is an offshoot of Judaism, it is reasonable to expect some Jewish rituals and beliefs to be incorporated. Thus, we find many references to the sacred use of incense in the New Testament as well. Referencing the New Revised Standard Version Bible again, examples are: In the Gospel of Matthew 2:11, the magi or wise men visit the baby Jesus bearing gifts that included frankincense. In the Gospel of Luke 1: 8-11, as priest Zechariah was offering incense to the Lord/God in the sanctuary, an angel of God told him that his old, barren wife Elizabeth would give birth to John the Baptist. In 2 Corinthians 2:14, Paul describes God and Jesus Christ as fragrance.

The Christian church began using the fragrant substance in the fifth century. Experts believe that in the New Testament Gospels, incense symbolized many aspects of Christian life. But within today’s three main denominations: the Orthodoxy, Roman Catholics, and Protestants, there are those who believe that it is not an appropriate representation of any aspect of their faith. So, which denominations still use incense in their worship service, when, and why?

Incense Use in Orthodox Worship Service

The Eastern Orthodoxy, or more formally the Orthodox Catholic Church, is primarily comprised of Eastern and Southeastern European churches. They consider themselves, and perhaps rightly so, to be direct descendents of the original church founded by Jesus’ apostles and later expanded by Paul. Following the Holy Tradition as it was taught by Jesus, they use incense in most of their worship services.

The aroma aids focus and the rising clouds of smoke represent congregants’ prayers rising toward heaven. It also symbolizes God’s presence and God’s grace being poured into them. Generally, the Eastern Orthodoxy believes that all five senses must be used in worship to pay homage to God.

Incense is burned during Divine Liturgy or Eucharistic service (offering bread and wine as the body and blood of Jesus Christ), Vespers (prayer service at sundown), Compline (prayers prior to bedtime), and Matins/ Mattins (prayers prior to dawn).

A thurible or censer, which is a covered, usually gold, receptacle with three or four chains, is swung back and forth by clergy to cense the altar, worship leaders, congregants or parishioners, icons, and the worship space. The altar is censed to invite God’s compassion; the worship leaders or clergy is censed because they represent Jesus Christ, and the parishioners are censed to prepare them for worship.

The Oriental Orthodoxy, which includes the Coptic Church, Syrians, Armenians, Ethiopians, Indians, and Eritreans, left the Roman Catholics and Eastern Orthodoxy in the 5th century. The split came because of differences in dogmatic terminology: The Oriental Orthodox Church believed Jesus was one being, both human and divine. The other denominations believed Jesus to be in two complete natures. But, their belief in and manner of using incense remained similar. In fact, they call their Vesper services Raising of Incense. Their censer is made of silver or brass with three chains representing the Trinity: God, Jesus, and Holy Spirit.

The Western Orthodoxy, also called the Western Rite Orthodoxy, includes the Russian Orthodox, Greek Catholics, Hungarian Greek Catholics, and the Protestant Ukrainian Lutherans. It was created in the 19th century. They follow the Byzantine Rite tradition or Chalcedonic belief as the Eastern Orthodoxy and the Roman Catholics. Styles of worship may be slightly different, but the burning of incense has similar symbolism and representation.

The Eastern Orthodoxy split from the Roman Catholics in 1054 when Pope Leo IX and Patriarch Michael I excommunicated each other over theological practices and language, and politics. It is known as the Great Schism. The Roman Catholics remained in communion with both the Eastern and Western Orthodoxy regarding faith, main beliefs, and governance, but divided on the use of incense in worship service.

The Roman Catholics seldom use incense though they have permission under the General Instruction of the Roman Missal to use it in the following ways: At the entrance of a processional Mass (worship service); at the procession and proclamation of the Gospel Book; preparing clergy, altar, cross, and congregants at the offertory; placement of the elements (bread and wine) on the altar; after the consecration (changing the elements into the body and blood of Jesus); on the Paschal or Easter candle; at Matins and Vespers of particular solemnity, and at funerals ( to honor the decedent with hope for their soul’s ascent into heaven).

The scent and sight of ascending clouds of smoke is supposed to put the congregants in contact with God, alert them of God’s presence, and send their prayers up to heaven. Because of these functions, they consider the use of incense sacramental. 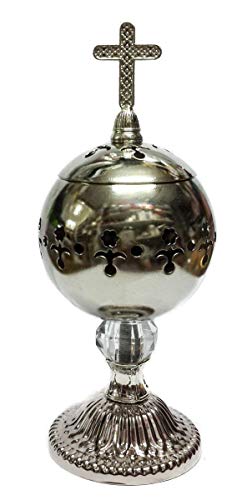 Incense Use in Protestant Worship Service

One of the main goals of the 16th century Reformationists: John Calvin, John Wycliffe, Jan Hus, Martin Luther, and others were for their followers to shy away from Old Testament laws and rituals. Since the burning of incense was a huge and important part of that, they called for its disuse in public worship. It was also a way to separate themselves from the Catholic tradition. Some of the more prominent Protestant denominations refused to heed the call and used the aromatic substance in their worship service anyway. In today’s churches, especially, its use is quite common.

The Church of England, also called Episcopalians or Anglicans, started under King Henry VIII after he seceded from the Roman Catholic Church. Though the use of incense in its liturgy was deemed offensive and illegal in the mid-1600s, use regained prominence by the mid-19th century. Anglicans now believe that incense helps one to focus on and honor God with their entire being during worship service. They believe this should occur because the sacrifice Jesus Christ made by dying on the cross for humanity was and is real.

Incense is burned in church at the following occasions: Solemn Eucharist or High Mass such as Christmas, Easter or celebrating a saint; Solemn Matins and Evensong (Vespers and Compline), and sometimes, at funerals. A clergy member leads the procession with a swinging censer of smoke and venerates the altar, the Gospel Book, and the offertory segment in the Mass.

The UnitedMethodistChurch was created in 1968 when two denominations, The Evangelical United Brethren led by Bishop Reuben H. Mueller and The Methodist Church led by Bishop Lloyd C. Wicke, became one body. The original Methodist tradition actually began with brothers John and Charles Wesley in 1744. Though they never formally split from the Church of England, they believed it to be corrupt and saw it as catering more to the aristocracy than to the working class and the poor. The denomination simplified and/ or created new liturgy and other aspects. The burning of incense was retained by some churches with limited usually use at Solemn Eucharist, and Evensong Praise and Pray Service.

The Lutheran tradition is based on the beliefs of German monk Martin Luther mentioned earlier. He disapproved of all Roman Catholic dogma and practices that did not strictly adhere to Scripture. Some of the churches use incense in worship service as a vessel to take prayers up to heaven. Psalm 141:2 provided evidence for their belief. They use incense at Eucharist, Solemn Matins and Vespers, on the Easter candle, and sepulchre of sacred altars. Clergy censes the altar, bread and wine, icons, themselves, and the congregants with a smoking thurible.

Parishioners might find the use of the regular or usual frankincense adverse to their health. Hypo-allergenic incense is available and used by many churches within the various Christian denominations.