Why did Muhammad Leave Makkah for Madinah?

In 622 CE Muhammad and his followers made the move from their hometown of Makkah to the city of Madinah. This journey is known as the Hijrah and is so significant in the history of Islam that the Islamic calendar dates from this event.

As my name implies, I am writing all my hubs from an academic perspective. I have no affiliation with any religion, nor atheism. All the information I include is intended to be factually correct and not based on personal opinion. I am not a member of any religion so I do not use the language of piety in my articles. If you think any of the information I have included is in some way inaccurate please leave me a note in the comments. Many Thanks

During the month of Ramamdan in the year 610 CE Muhammad received his first revelation from Allah. This event is known as the Laylat al Qadr. At this time the main religion of Arabia was Bedouin polytheism.

The Bedouin polytheists believed in many gods, had no sacred literature and very little in the way of organised worship. Their main loyalties were to their particular tribe and not to some omnipotent God. With this then, went frequent wars, dishonesty and greed.

Earlier in his life, Muhammad had met a hanif called Zayd ibn Amr. This is thought to have occurred sometime between 595 and 610 CE. Hanifs were those with no religion but who rejected polytheism and worshipped the one True God. Muhammad was very impressed by Zayd and became more interested in religion after their acquaintance.

As the time passed, Muhammad found Bedouin poltheism more and more offensive and in his quest for the one True God, he began to pray and meditate alone in Cave Hira on Mount Nur. It was here in this cave, alone in relefection, that Muhammad's prophethood began.

Bringing Arabia Back to Islam

The concept of bringing Arabia back to Islam may seem quite baffling to those who are not familiar with the religion of Islam and Islamic beliefs.

Although from an historical point of view we say that Muhammad founded the religion of Islam, that isn't technically how Muslims view it. Islam, from a Muslim perspective, has always existed and has always been the one True Religion. The first humans, Adam and Eve were Muslim and all the prophets of Christianity and Judaism are also recognized as being Muslims in Islam. A Muslim is simply one who submits to the one True God. Muslims believe that Allah is the same god that is found in Christianity and Judaism and respects Jews and Christians as "People of the Book".

In this sense then, Muhammad is not starting a new religion he is simply starting a new era of the Arabs coming to know and accept the only religion- Islam.

After the first revelation, Muhammad confided in a few close members of his family including his wife, Khadijah and her Christian cousin, Waraqa. Muhammad did not act upon the events of Laylat al Qadr and it was sometime before he was visited again by Allah's messenger, Jibril. There is some debate as to how long a period of time passes between the first and second revelation with some putting it as long as three years. However long it was though, it certainly wasn't straight after and the period of time is known as "The wait". During this time it is believed that Allah was testing Muhammad's faith.

The second revelation commanded Muhammad to "Rise and warn" and it was ultimately now, that the beginnings of Islam and Muhammad's prophethood would really get underway. Muhammad could no longer hide his revelations from the public. He was to be thrust out of the safety and comfort of his family's confidence and preach in public. To begin with Muhammad did this amongst his wider family but as his confidence grew and the revelations continued he realised he must bring his message to a much wider audience and that he was tasked with bringing the people of Arabia back to the religion of Islam. (See box on right)

As aforementioned, the first converts to Muhammad's message were his wife Khadijah and her cousin Waraqa. They established a system of morning and evening prayers by which to worship the one True God. Soon, their dedication impressed other family members and more early converts were made including Muhammad's son-in-law, Ali and his foster son, Zayd ibn Harith. From outside the family, Abu Bakr was the first convert. By 613CE Muhammad had around 30 Muslims but Allah has a much greater number in mind. It was around this time that Muhammad received another revelation calling for him to make his ministry more public:

As Muhammad became more public and his following grew he became more of a threat to the Makkan authorities. The message of monotheism was unpopular for two main reasons, one theological the other economical.

As you might expect, the Makkan authorities did not rest on their laurels. They began a campaign against Muhammad and his followers. Muhammad's life was threatened and many of his followers were tortured and killed. Less serious attacks saw meetings broken up and rubbish thrown at Muhammad's door.

At this time Muhammad was under the protection of his clan the Banu Hashim. However, in 617 CE two powerful clans from Muhammad's tribe, the Quraysh placed a boycott on Banu Hashim to punish them for protecting Muhammad and also to try to convince them to remove their protection. The boycott meant no one could marry with the clan or trade with them.

The Muslims had a small victory when they were able to convert a great warrior, Umar, who was sent to kill Muhammad. It is said that Umar would openly pray to Allah at the Kabah in front of the Quraysh leaders. The conversion of Umar strengthened the Muslim cause greatly but the persecution continued until 619 CE when the boycott was lifted.

After the boycott had been lifted Muhammad still had some conditions placed upon him. he could not preach openly in Makkah and could only make new converts as fairs outside the city. It was at one such fair that Muhammad attracted the attention of six Yathribians.

A year later in 621 CE, the Yathribians returned and offered Muhammad a chance to go to Yathrib with his followers. In Yathrib he would be the political and spiritual leader and he would be free to preach and expand the religion of Islam.

Muhammad accepted the offer and made the move with his followers in 622 CE. The Journey, known as the Hijrah, can be seen on the map below. Click on "Show Route and Directions" and you can see a walking route between the two cities. Please note the route is provided by Google, a service that was not available to Muhammad and his companions, so it is unlikely to be the exact same route that the Muslims traversed!

The Journey from Makkah to Madinah 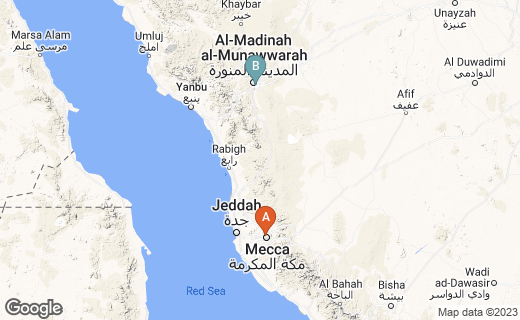 What Were the Push Factors?

When we talk of push factors we mean what were the factors that made Muhammad and his followers want to leave Makkah- in other words what was pushing him out of his home town towards the distant and unknown city of Yathrib?

There were many push factors that contributed to Muhammad's decision to leave Makkah, many have already being touched upon already in the article.

Firstly there was the fact Muhammad faced great persecution in Makkah. His life and the lives of his followers was at great risk. In 619 CE, known as the Year of Sorrow, Muhammad lost two of the most important people in his life. Firstly his beloved wife, Khadijah died and then his uncle and protector Abu Talib died.

The loss of Khadijah may have made Muhammad crave for a fresh start but Abu Talib's death was probably more significant as it meant Muhammad no longer had the protection of Banu Hashim. When Abu Talib died, Muhammad's other uncle Abu Lahab took over as leader of the clan. He opposed Muhammad and Islam and so withdrew the clan's protection. The loss of this protection meant that Muhammad was now in grave danger, leaving Makkah was beginning to become a necessity.

Before Muhammad had been approached by the Yathribian men he had tried to find another town to base himself and his followers. He had gone as far as to approach one such town known as Ta'if where he felt certain Islam would be accepted. He was wrong. The people of Ta'if reacted badly to his proposition and Muhammad was chased out of the town with stones.

After this episode Muhammad must have begun to realise how desperate his situation was. Not many people in Makkah, nor the surrounding area, wanted him there. The hostility of the surrounding areas made Makkah a less attractive base from which to expand the religion. Even if Muhammad some how managed to convert the whole of Makkah, the religion could end up being confined to just the city. Muhammad felt it his duty to bring the religion of Islam to the whole of Arabia- he would not be content to only convert one city so the offer from Yathrib must have been most welcome as it not only provided Muhammad with a safe base it also had scope for further expansion.

What Were the Pull Factors?

What was it about Yathrib that drew Muhammad and his followers? What made it a more attractive alternative than Makkah?

The reasons why the Yathribians wanted Muhammad is well known. The two main tribes were involved in a long standing blood feud and they saw in Muhammad a man who was neutral and able to put an end to the relentless fighting and bloodshed.

There are many pull factors that convinced Muhammad to leave his beloved Makkah for Madinah, as it became known.

Firstly there was the matter of safety. Muhammad was not safe in Makkah, that was now very clear. In Madinah Muhammad would be away from Makkah and he would have the protection of not only his companions but also the people of Madinah. Far away from Makkah, Muhammad would not be seen as a threat and the Makkan authorities would probably leave him be.

Secondly there was the matter of being able to openly preach and practise the religion of Islam. This was something that Muhammad could not properly do in Makkah.

The Yathribians made a pledge to Muhammad that they would convert to Islam and live moral lives. So not only could Muhammad preach openly but he would have a ready-made city full of new converts. This is known as the First Pledge of Aqaba.

The Second Pledge of Aqaba was even more significant. Here the Yathribians pledged to take Muhammad as their political leader. Being the political leader, as well as the spiritual leader would give Muhammad far more power to expand the religion of Islam. The revelations to Muhammad were clear- Islam should be a complete way of life. It should not be something that one does on the Holy Day and forgets about for the rest of the week. Taking on the role of political leader meant that Muhammad could establish a theocracy based on Islam and establish Islam in every day life, as Allah had always intended.