Wiccan Wheel of the Year: What is the Winter Solstice/the Wiccan Yule?

Sage has been celebrating the Wheel of the Year for 25+ years, and being a holiday junkie, she just can't get enough of the sabbats!

About the Wiccan Yule

Oh, my goodness! Shake that snow off and come on in here! You must be freezing-- let me help you out of that coat and those wet boots. Come, lets go take a couple of chairs over by the fire. A cup of mulled cider will help drive that winter chill out of your bones.

The dark days are upon us now-- no sooner has the day begun does it seem to be coming to an end. I like to curl up in a blanket by the fire with my knitting or a good book-- these nights seem to go on and on.

It's the time of the Winter Solstice. On this night, the Mother Goddess gives birth to the new Sun God-- at least, that's the mythology of this sabbat. If you can, imagine a new nativity scene:

You come to a forest clearing. A glistening white blanket covers the ground, and snow-laden branches sparkle by the light of the full moon, bringing an unearthly, silvery glow against a backdrop of the starry night. Woodland creatures gather-- the bear, the fox, the field mouse and snowbird-- yet there is no prowling or fighting among them; they gather in perfect peace. Some unexpected visitors -- the fairies, the elves, those who rarely make themselves known to humankind -- also gather in wonder and joy. In the center of the clearing sits three women: the Old Crone, with a twinkle of wisdom in her eye; the Maiden, in her youthful innocence; and the Mother Goddess, with her caring, nurturing smile. They gaze down at the bundle in the Mother's arms-- the golden, glowing baby Sun Lord who is newly reborn.

This mythology symbolizes the return of the light that will bring back the Spring, the warmth and the fertility of the land. It's a time of hope and promise. The Solstice teaches us that in the darkest of times there always remains a spark of light.

When is the Winter Solstice?

The Winter Solstice might fall anywhere between the 20th and the 22nd. Solstices are astronomical events. The Earth's axis is on a tilt. This tilt is responsible for the changes of the seasons, as well as the length of our days and nights. The further the North Pole tilts away from the Sun, the colder the weather and the longer the night. At it's most extreme tilt, the Sun appears in it's lowest point in the sky. It results in the longest night of the year, and the shortest day.

It's also the moment we experience the shift-- while the Northern hemisphere has been tilting further and further away from the sun for the last 6 months, it reaches the point of return at Solstice. It will begin moving its tilt toward the sun day by day, incrementally, to bring us back to Summer.

This year (2013) the Winter Solstice will fall on December 21st for the majority of the Northern Hemisphere. Like most Wiccan holidays, there is no absolute obligation to hold your celebration on any day in particular-- you're free to move your celebrations to the nearest convenient date. Hold it a few days before or a few days after. Some Wiccans move their celebration to Christmas day-- since many businesses are too busy to let employees off during the week of Christmas rush, it can be hard to get off on the actual Solstice, but many of those same people have off Christmas day anyway so it's a convenient way to do it. It's the spirit of the season that's important and what the Solstice represents, not the actual moment it occurs.

Pagan Christmas: The Plants, Spirits, and Rituals at the Origins of Yuletide
Maybe you grew up celebrating Christmas with your family? Solstice is really not going to seem all that foreign to you. Here are some wonderful ways to shift your season's focus!
Buy Now

History of the Winter Solstice

The Winter Solstice is a time of year that's been observed by a few different cultures for thousands of years. The Romans had the festivals of Saturnalia in honor of the God Saturn and Dies Natalis Solis Invicti-- the rebirth of the unconquered sun.

Germanic people celebrated Yule, focused on Odin and the Wild Hunt. Earliest versions had Wotan (Odin) riding his flying horse across the sky, and in some versions of the myth he showered gifts and blessings upon the people. It's one of the earliest incarnations of the Santa myth. With the spread of Christianity, the Germanic Yuletide customs were later merged with Christmas celebrations.

In Eastern Asia, people celebrated Dongzhi, entering the yang part of the year, a time for good fortune and purification.

Chawmos was celebrated in the Middle East and was the time when people were ritually purified and sent prayers to their supreme God.

Up in the northernmost tips of Europe, the Saami people worshiped Beiwe, a Sun Goddess who brought fertility (who, incidentally, flew through the sky with reindeer-- sound familiar? In some versions of the myth she flies with her daughter in a carriage made of reindeer bones; in other versions, she flies with skeletal reindeer made of her daughter's bones).

In Greece, the death and resurrection of Dionysus are tied to the Winter Solstice.

The list goes on and on, and though much of these celebrations have been lost to us, or have been absorbed by Christianity and transformed into Christmas traditions, there are a few common themes throughout:

Did I mention, I love Lisa Thiel? 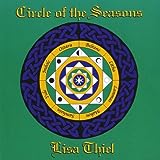 Yule
If you've read any of my other articles that happen to mention Pagan music, you'll already know this. Look at the video below for her Yule song.
Buy Now

Because we draw from some of these older religions and festivals, Wiccan Solstice celebrations are sometimes mistakenly thought of as ancient. Wicca is not an ancient religion, though; there has never been a religion of Witches celebrating the Winter Solstice throughout the ages. When Wicca was founded in the 1940s, the original Wheel of the Year included only four holidays. It was Gardner's coven that later added the solstices and the equinoxes as significant points. They were deemed the 'Lesser Sabbats'.

The Winter Solstice that is celebrated by Wiccans (and embraced by the larger Pagan community) are often called Yule, but are not that similar to the original Germanic Yule, or the Christianized Yule-tide celebrations. Oh, much of the decorations and traditions appear the same on the surface, but there are somewhat different meanings and myths attached.

What do you love about this Sabbat?

What's your favorite part of the holiday?

Our modern Winter Solstice festivities are an eclectic amalgamation that incorporate some cultural influences, some ancient stories, some "fakelore" (romanticized solstice history claims that never actually happened) as well as some beloved Christmas traditions that many of us grew up enjoying (without a focus on Christian religious reasons for their celebration).

Feel free to draw from numerous sources when planning your Solstice celebrations! If you traditionally like to bake cookies and decorate a tree-- go ahead and do it. If you like the idea of a big communal feast, plan one. If participating in the whole Santa myth with your kids and doing a 'Kris Kringle' gift exchange with friends rocks your socks, have at it. If you come from a Jewish background you might wish to incorporate your favorite parts of Hanukkah, or if your family celebrated Kwanzaa in your youth you can bring some aspects of that into your Solstice. All the awesome things of the winter holiday season that speak to you -- be it the music, the food, the gifts, decorations or fun little activities you used to do as a child -- they are all seasonally appropriate. So indulge in the Winter holiday season just as you always have-- with a new Pagan spin on it all.

If you're looking for something a little lower key, just light some candles and spend the night in meditation and prayers, keeping the Goddess company in her labor-- then go out in the morning and watch the sunrise. I can't think of a more beautiful or poignant way to experience the Solstice.

May your Solstice be merry and bright, and your new year filled with blessings.