How to draw witches and by witches I do mean classic witches that you might see at Halloween from The Wizard Of Oz. This will be a good in depth look at drawing witches and so you know Dark witches are the evil black witches who deliver the evil twisted magic spells to those that deserve them or to those that do not, they used to be eight witches in the twisted coven but now only three remain, they have gathered their forces and ancient remnants of long forgotten spells and relocated to a remote part of the world that most people do not know about.

I'm still working on the back end of my graphic novel about the last 3 witches and their troubles with demons, below is a few samples of 2 of the characters and I am feeling like it would actually look good if I inked all of the book and then shaded it in in pencil or if I scanned the pages into my computer and did the same but with a more cleaner and smoother gradient texture as I do have Photoshop Elements on my computer, so that would be a great idea, Hmmm? the possibilities!

And I'll inform anyone who is interested in seeing and purchasing a copy when completed, actually that could be another hubpage showing a preview of the graphic novel and maybe a portion of the creative process involved in undertaking writing and drawing a comic book/graphic novel.

How To Draw Witches Books 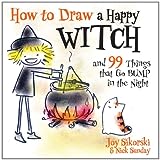 The witch drawing below I created by sketching in the figure first with a HB pencil and then darkening the areas that needed to be shaded with a 2B pencil and then I inked all the important pencil lines giving it a permanence, notice how the shading compliments the drawing and makes the art stand out more, try it yourself and see that drawing witches is fun.

Another Witch Pen And Ink Drawing

Similar to the above I sketched the idea out a couple of times to get it right as I wanted this witch drawing to have a mystical and almost magical design with the floating book just like she is casting magic, again the shading really helps bring this character to life just as adding color would to any drawing.

When you sketch your own witch art, try to aim for some experimental sketches first because you never know what drawings you'll come up with, I have some cheap sketchbooks for these types of sketches and it is about trying to be inventive with them, get inspired by old witch illustrations from different sources and try and sketch them down to incorporate into your witch designs.

I wanted this one to have a focus to the drawing and that focus is the wand, maybe the witch has just found the most powerful wand in the world or she has caught it after battling an evil witch or something, whatever the case I wanted the witches wand to be the centre of focus the way that witch holds the wand which looks like a twig which is typical of magical wands in Harry Potter.

The drawing as you can tell has been created in a similar way to the others and as such this can be the best way to add some atmosphere to your witch art, by just shading in greys and adding black ink. It certainly would make a very artistic comic book if you or I created one and just added shading this way to all of the pages.

How To Draw Witches And Other Stuff - Hubpages