Tales of Brighid the Goddess are as endless as the timelessness of her mythology. A goddess now told of with many different names and many different spellings from a time of no scribing, no dictionaries and no country-wide spoken languages.

We can speculate her being from dramatic images of fire, light, sound, healing waters and from the earth beneath her toes. Our interpretations of her presence today can give us, especially women, meaning of who we are, why we are here and what we serve.

Her mythology, legends and rituals that came from those were blessed upon women who lived on this earth, leaders who inspired and were connected to what the people interpreted at Brighid.

Eventually, there was order to her legend, synthesized, maybe cloned, but has made sense and has enhanced the lives of millions, since Brighid of Kidare.

In this feature I will wander around tales I have heard and places I have roamed that storytellers have aligned to her many different names, as goddess and midwife of all life

Let's stoke the hearth, light the candles, and ponder.... 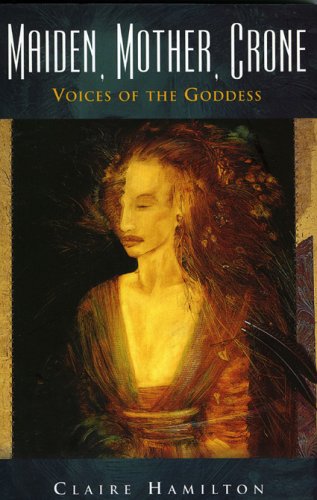 This famous triple spiral photograph, by Ken Williams, within Newgrange, is a good symbol of where it all started, "all" being a faith in an earth mother that today we call Brighid, among other names.

Other names include Bride, Brid, Brig, Brigid, Briget, Brideog, Breeg, and there are many, many more.

There are longer names such as Breo na Saigéad, and shorter such as Brí na Óg, 'light of love', and there are many spellings and pronunciations of that because the letter symbols we use in writing today never existed then, there was no scribing, no dictionaries. So we do our best to use a name and hope others understand.

All these names seem to reach towards one reference though ...The Fiery Arrow

... though some folks like to interpret that as "Flame Of Ireland", because that's how a lot of imagery of Brighid manifests as.

A Fiery Arrow is a good one, though, as it appears that the ancient Ghael language, from which most of the Brighid names seem to evolve from, never had a word for lightning, the light flashes that accompanied thunder. It seems the ancients called these lightning flashes

So how would lightning manifest as a goddess image?

From all the trees present there is one tree that attracts lightning more than most. That is the oak tree. No wonder part of the Brighid symbolism is the oak.

When lightning stuck an oak tree, at a time when ancients never carried lighters, firelighters and boxes of matches, this was regarded as a very precious and sacred gift. I assume that sometimes the struck oak tree became the fire hearth in situ, a very sacred place indeed, or some embers carried to family hearths and treasured.

One challenge to lightning hitting an oak tree, though. The Holly trees.

Holly trees tend to grow close to other trees, especially oaks. The thorns on the holly leaves are excellent lightning conductors so if lightning threatens an oak tree it may often be redirected to the holly leaves and earthed without harming either the holly or oak trees.

As this would restrict potential access to fire for the ancient people it is liely the holly trees were cut down. This may well be an ancient origin of why Holly is brought into the home over Yule, or wrapped around Yule logs to kindle them. Holly trees are not clearly revealed until the oak leaves have fallen and leave a bare tree, before mid-winter.

Some folks may say, well the ancients lighted fires with flint sparks and friction methods. I am sure they did, but fire from lightning would have been regarded as much more gifted and sacred than rubbing sticks together. Best tree sticks to rub together? Strangely, it does not seem to matter on tree species but how dry the sticks are. Best results do seem to be from apple, hazel, birch and rowan though.

So from the name we have the oaks, struck by lightning, giving fire to kindle hearths ... 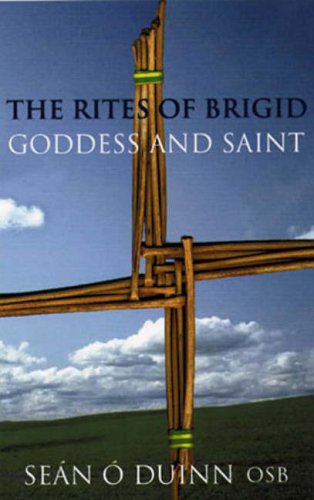 Like the Saint Brighid the Goddess Brighid is spoken of as being a triple deity or triple skilled goddess or patron of the trinity of healing, poetry and smithcraft.

Healing seems to cover all of our nourishment, our food, our water, our herbs, our medicine, our meditations, our prayers, our handling of concerns, seeing the light and trusting in true guidance.

Poetry seems to cover all passionate truthful communication between people and other people, other life and unseen spirit and not just the scribing and performance of words, or words with music.

Smithcraft may be the most potent as it brings us to the fire of the hearth.

The pic here is a group passing their prayers into a flame within the Brighid's Hearth within the grounds of the Kildare Cathedral.

Stories of the goddess describe Brighid as being born out of flames from the earth, flames that shoot towards the sky and reveal the goddess. Watch what happens when the smith bellows oxygen into his forge hearth to make the metal much hotter and you will see a manifestation of this Brighid image.

Women As Smiths in Ancient Times?

In ancient times it is told that male warriors, later to to known as knights from the iron age onwards, were both land stewards and sword stewards. Note I do not use the word "owner".

A man's sword was more a statement of his position than as a weapon of battle. I am sure there is a connection to the shaping of early swords with the symbol of the cross.

Brighid the Goddess seems to come through to us from a time of around 4000 BC to 2000 BC, a time of the Age of Taurus a time of the bull and cattle, a time of stone age, new stone age, but already a time of bronze age in middle eastern lands, though not in Erin yet. The bronze age did not seem to come to Erin until around 1200 BC, but some of this tradition is still told as lingering with the Tuatha De Dannan.

The main stories of the Goddess and the hearth of around 4000 BC to 2000 BC seems to come to us through Minoan stories of Crete and nearby and from the Hittites of Babylonia.

It is said that women were taught to extract ores, copper and tin, and create bronze. With this they would create a sword which would be their dowry for their chosen mate, passed to him upon their union

If the woman's partner died before she bore a male heir to carry the sword she was entitled to have the sword returned to her. Her main role in life would suddenly become the same as her husband's was until she found another mate to pass her sword to.

Eventually, this was believed to be a "law" of Brighid in Erin but faded within a few hundred years when a new more patriachal iron age race ruled.

The change was that if a man's wife did not produce male heir there was nobody to pass his sword to. His sword was thrown into a lake or deep river, the family land placed into the stewardship of the chieftain and wife and any daughters became the care, maybe slaves, of the chieftain who would choose any possible mates in the future.

Another change was for the men to be regarded as being in the ancestral line of men, sons taking on the names given by their fathers and chieftains rather follow the line from the wombs of the mothers.

To some, this was the snuffing of the Brigid's hearth that brought upon lower farming yields, famine and plagues told of as being present through the Iron Aries age and a switch to devotion to celestial father gods more than earth nurturing mother goddesses.

Humans have always had a close relationship with bees. Honey has probably been a staple food for humans as long there has been humans. Beekeeping is one of the earliest skills of settled farm based society and culture. Bees, and other insects, made settled farming possible through their action of pollinization of fruit trees, especially apple trees, and other food crops.

Bees not only provide food through honey and their gathered pollens, but their waxes have been essential for effective medicines and as an aid in metalworking.

Sadly, as we hear from the media, the populations of Bees around the world are fast dying and nobody seems to understand why. Ancient legends have foretold that if the Bees died and became extinct in this world, human extinction would soon follow.

Rather than ponder on the gloom and doom of this I would like to journey with you through the origins, the genesis of the Bee on earth and how its symbolism has shaped how we live. Through understanding this maybe we can encourage, in our own small way, a stronger lifespan for the Bee, both in its pollinating existence and through our closeness to what we may call "the Bee Goddess".

I have now continued this in a longer feature, and you can click here to read it ...

a beautiful video of Brighid symbolism ... - includes life of Brighid of Kildare too

your words about Brighid the Goddess?