In Honor Of Sekhmet

Vision, Creation And Cooperation Coming Together

The Temple for Goddess Spirituality Dedicated To Sekhmet ( just "the Sekhmet Temple" to those who go there) is more than just a sacred space. It was founded to serve a diverse community near it's location in Cactus Springs, Nevada and the remote community of friends, seekers and travelers who journey to visit it.

In addition to being one of the only dedicated Goddess temples in the United States, the temple also works to engage with those involved in peace activism, interfaith community, environmental rights and more. The site has a resident priestess who is the caretaker and who oversees what goes on but around her is an ever-changing group of volunteers who joined in co-creating the form and function of the space and land.

One thing of which there is no shortage at the Sekhmet Temple is collaborative art. From the temple itself to formal artwork to desert installations to communal events, shared visions and creations can be found everywhere. I have been visiting the temple for many years now and have helped create a variety of art out on the land, and I wanted to share some of that with you here.

Overnight on Friday April 17, 2014, a person or persons snuck out to the Temple on the land and stole the statue of Sekhmet from inside the sacred space. Police in the area are seeking further information, and the amount of the reward has been increased to $4000. If you have any information regarding this theft, please contact either the Indian Springs PD or contact the Temple, http://www.sekhmettemple.com

How the Temple Came to Be

The Sekhmet Temple and the Center for Goddess Spirituality came to be as a combination of a vision and a promise to be kept. The vision was the dream of Genevieve Vaughn, who wanted to see a place created that could be a women's retreat, a center for the study of her theories on the gift economy and because at a temple in Egypt she had promised the goddess Sekhmet to build her a temple if she gave her a daughter.

The land, which had once belonged to the Western Shoshone and was then seized by the US Government was bought by Genevieve, who then gifted the land back to the Shoshone and arranged with them to lease the land for the temple grounds. The temple structure is a straw-bale construction with doors to the four directions and a roof open to the sky. It was erected by a women's collective calling itself C.H.A.O.S. (chores, housework and other stuff). The statues inside were made by an indigenous artist commissioned to craft the pieces.

There are a variety of other spaces that have evolved on the land over the years. There is a fairy shrine, a pet cemetery and space for grieving, a social fire area for when larger gatherings happen, an installation for peace, a spot where sweat lodges can be held and more are evolving all the time.

If you can't get to Nevada for a visit or would like to take a look before you do, here are some videos shot in the temple and on the land.

Explore the Wisdom of Sekhmet on your Kindle 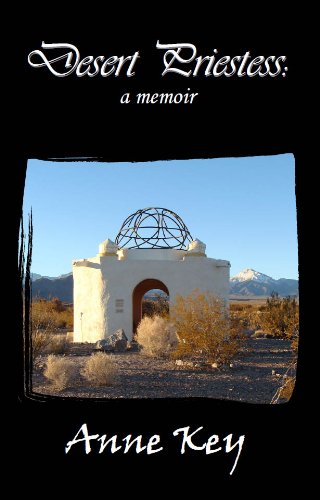 Desert Priestess: a memoir
The Kindle edition of former temple priestess Anne Key, describing her experiences as caretaker of this unique space and her relation to Sekhmet.
Buy Now

Building The Goddess Labyrinth - a sacred place for meditational walks

Have you ever been to the Sekhmet Temple? If so, please share what your experience was like! If you haven't been there, would you like to visit it?

What do you think of the art you've just seen?