Om Mani Padme Hum is a popular mantra in the religion of Buddhism and almost every lay person that follows this teaching will somehow know about it.

According to Buddhism, this ancient mantra is associated with the bodhisattva of compassion, Avalokiteshvara. For the Chinese, Avalokiteshvara is normally known as 'Guan Yin' which translates to Goddess of Mercy in English.

The Tibetan, on the other hand, refers this bodhisattva as 'Chenrezig'. It is said that all the teachings of the Buddha are contained in this Om Mani Padme Hum mantra and which the Tibetan buddhists believe that saying the mantra (prayer) out loud or silently to oneself, would invoke HIS powerful benevolent attention.

Additionally, Chenrezig holds a special place in the heart of Tibetan people because they regard him as their proctector. This is because according to one of the dharma stories, Chenrezig is sent by Amitabha Buddha to look over the people of Tibet with the intention to help them to ending their sufferings.

Tibetan Buddhism also states that Chenrezig is renowned as the embodiment of the compassion of all the Buddhas (TEN DIRECTIONS) and this is why HE is highly regarded in the Vajrayana Buddhism.

The Tibetans also believe that the Dalai Lama is an earthly manifestation of Chenrezig and that's why His Holiness is well respected by all the Tibetan people and also the followers of Tibetan Buddhism.

In Tibetan, this mantra is pronounced as "Om mani peme hung" and by practicing this mantra, it is believed that the practitioner will be able to accumulate merits and also purify his/her bad karmas and delusions.

It is very common that every Tibetan recites this mantra even though they do not understand the deep meaning behind it. For they know this mantra will bring peace and give them strengh when facing difficult situations or during turbulent times. One of my best friends that visited Tibet and Bhutan some years ago told me that he would hear this mantra played in almost every tea house that he stopped by.

Tibetan people recite this mantra thousands time a day as part of their daily prayer practice. Apart from that, they also carve this mantra on rocks and insert paper written with this mantra into holy statues and prayer wells. It is said that by doing this, the mantra's effects will be increased tresmendously. 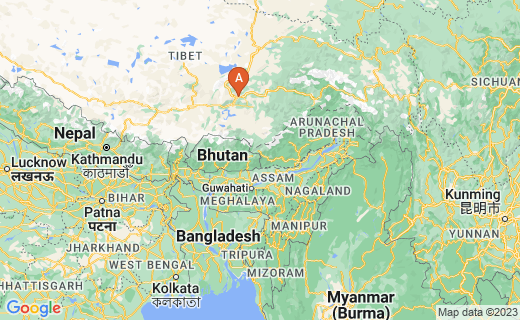 The place where Buddhism is highly regarded.

According to wikipedia, a mantra is a sound, syllable, word or a group of words that is considered capable of "creating transformation".

On the other hand, Dr Deepak Chopra in "

And by uttering a simple pattern of these sacred sounds, the practitioner will gain an insightful experience towards what the mantra represents. It is believed that mantras can actually promote physical healing, magnifying the powers of the mind and also attracting abundance into your lives.

The most important aspect when reciting a mantra is actually lies in the pronounciation itself. Accurate pronounciation is crucial for the mantra to take effect and some even said that reciting a mantra without knowing the meaning will work too. However, according to some, by knowing its profound meaning, the power of the mantra will get magnified. This is absolutely true when the practitioner does it with focus and single-mindedly.

Now, what is the meaning of Om Mani Padme Hum?

However, according to Donald Lopez, Mani Padme is in fact addressing a boddhisattva called "Jewel-Lotus", which in fact an alternate attribution given to the compasionate bodhisattva Avalokiteshvara. This mantra which is preceded by the Om syllable and followed by the Hum syllable, actually do not have linguistic meaning at all.

Please also note that both the Om and Hum sounds are actually the natural sound of the universe and they can be found everywhere in the mother nature. Even these sounds also serve as the "base" sound of every sound in the world.

In short, it could be concluded that this mantra is praising the bodhisattva Avalokiteshvara which itself represents compassion. Practising this mantra tunes one mind into loving kindness and igniting the compasionate heart towards every sentient being including oneself.

However, it is important to point out here that it is quite impossible to give one single exact meaning to "Om Mani Padme Hum". This mantra has been interpreted by practitioners in many other ways; however, it is yet to divert far from its base meaning of compassion. Please find below the interpretation by His Holiness Dalai Lama and Dilgo Khyentse Rinpoche.

From His Holiness the 14th Dalai Lama

The path is indicated by the next four syllables. MANI, meaning jewel, symbolizes the … altruistic intention to become enlightened, compassionate and loving….

Purity must be achieved by an indivisible unity of method and wisdom, symbolized by the final syllable HUM, which indicates indivisibility….

"The mantra Om Mani Päme Hum is easy to say yet quite powerful, because it contains the essence of the entire teaching.

— Dilgo Khyentse Rinpoche, Heart Treasure of the Enlightened Ones (from wikipedia)

Mantras can be practiced by everyone regarding of creeds and religions. And this is absolutely true with Buddhism as often it can be regarded as a form of teaching or a special kind of knowledge rather than a pure religion.