Reflections on the Book of Jonah

The book of Jonah has been a source of inspiration for me for many years. Much of the what Jonah teaches me is more like a lesson from Papa Berenstain Bear than what you normally expect to gain from the Bible.

Yes, Jonah has taught me a lot, especially what NOT to do. Below you'll find several lessons this unlikely prophet inspired. From his running away from God to his days in the whale to his whining under a bush, we can learn a lot from the son of Amittai. Even if it is what NOT to do!

What you'll find below:

Lesson One: When God Tells You to Do Something, Just Do It.

"When God tells you to do something, just do it" is a recurring theme in the book of Jonah. The prophet himself is told to go to Nineveh, but he heads in the opposite direction. Jonah told the men on the ship exactly what to do to get the wind and the waves to settle down, but "instead, the men did their best to row back to land." Disobedience brings even rougher waters and higher winds and eventually lands Jonah inside the belly of a big fish.

We focus a lot on Jonah and the big fish, but what about these sailors. They believed Jonah when he said that the rough water was caused because he was running away from God, but when he told them how to make it stop, they decided to try outrunning God themselves.

How many of us do the same thing? We know exactly what God wants us to do, it's as clear as fine glass. But when it comes down to it, we try to outrun God, or like these Old Testament seafarers, we turn around and head back to the place where we're familiar and comfortable.

Often we relate to Jonah's story, but we know the outcome of his tale. On the other hand, we know very little about the guys who rowed for their lives. We know that as soon as they obeyed the raging seas grew calm. We know that this miracle put the fear of God in them and they sacrificed and made vows to their Creator, but after that, their story is a mystery.

If we stop to think about it, though, the story of these sailors could easily be ours. Often we neglect our worship of the One True God until violent storms rock our world. Then we turn to God, we worship and make promises. And while we don't know how the story ends for the crew of this ship, we have the ability to write the end of this story for ourselves.

What happened with these sailors the next time someone told them what the Lord Almighty wanted them to do? Did they "just do it," or did they try to row back to land again? What about us? Do we learn our lesson the first time, or do we constantly try to do it our way before we understand that when God asks us to do something we should just do it.

When the sailors were obedient, God answered. He calmed the storms in their lives and gave them peace. When we are obedient, God does the same thing. He wants to change the violent waves into tranquil waters. He waits to tame the winds and still the boat, but as long as we're still trying to get back to that familiar, comfortable place, the waves get higher and higher, the boat tosses and rolls, and the skies are always grey and bleak.

So the next time you hear God in a sermon or see His will in His Word, just do it. Don't wait for a sign or calm seas, throw all your cares overboard and watch for Him to work.

Big Fish by FFH - based on the story of Jonah

When you stop and think about the whole story of Jonah, the man is really pretty unimpressive! He is disobedient to the point of running in the opposite direction, and then when he gets caught and punished for his disobedience, he starts praising God and making promises. Jonah’s prayer is a beautiful poem of faith and change of heart. Even though he’s facing death, Jonah knows that he will see God’s temple again.

Even as he sinks to the bottom of the waters, he believes that the Almighty will rescue him from the pit. He realizes that grace comes only through his Heavenly Father and that idols are worthless. If the only part of Jonah we’d ever read was chapter two, you’d think that this prophet was a man after God’s heart, like King David, rather than a runaway servant who’d only chosen to “make good on his vow” because he’d found himself fish food.

However, I know Jonah’s entire story, so his words seem quite hollow to me. On the other hand, they sound familiar. All over the world people are turning to Christ because of trials and brokenness. Daily I hear about people who’ve called out to the Lord in their distress; never mind that it’s their disobedience that caused the distress in the first place. And if I’m honest I’ll admit that even I am guilty from time to time of getting myself in a mess because I didn’t listen to God and then expecting Him to make it all better because of my cry for help.

The difference, I hope, between Jonah and me is the attitude after the promise. Jonah did the work that God requested, but we see in chapter four that he wasn’t too terribly happy about the outcome. I hope that in those times I ask God to bring me up out of the pit I’ve put myself in, I will be grateful to him for the beautiful gift of Salvation and actually desire to be obedient to what He asks instead of begrudgingly carrying out the task at hand.

It’s important to remember when we are praising God and making promises to Him, whatever our variety of reasons might be, that God prefers obedience over lip service. He loves a CHEERFUL giver, an obedient attitude and praises from the heart. Our words are nothing to Him if we don’t follow up with our actions. 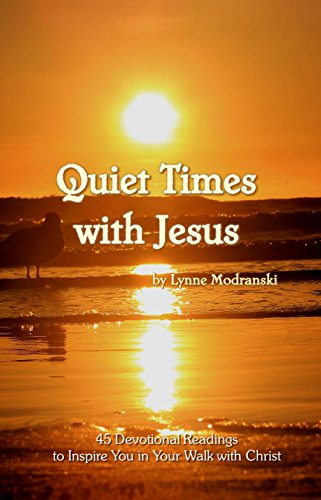 Quiet Times With Jesus: 45 Devotions to Help You in Your Walk with Christ

Life is so busy. It's easy to get into our daily routine and forget that we need Christ in the middle of it. These forty-five short readings will help! They are based on scripture and offer personal reflections to make you really think about what the word of God said. It's important to make the Bible a central part of our day if we want to grow in Christ.

Lesson Three: Are You Living Up To Your Potential?

I've been in ministry of some sort for most of my adult life. I started out playing the piano for the little kids in Sunday School, led Children's Church in my late twenties and then my hubby took us into pastoral ministry in our thirties. It's been nearly 30 years, and I'm pretty certain that I have not helped change as many lives as Jonah did single handedly in just a few days.

Nineveh was so large it could take up to three days to get through the entire city. The Bible tells us there were more than 120,000 residents in the city, about the size of Hartford or Stamford, Connecticut. We don't know for sure how long Jonah preached there, but it doesn't seem like it took very many days for the people to respond to his message. His speech was so persuasive that the King took notice and pronounced edicts requiring the entire city to act as if they were repentant. Chances are there were many whose heart didn't line up with their actions, but just the fact that more than 120,000 people made changes in their behavior for even a short time because of Jonah's visit is pretty impressive.

However, instead of rejoicing that people were turning to the Creator because of His mission, Jonah complained. He didn't want His enemies to enjoy the blessings of God. It makes me wonder how much more good could have been done for the Kingdom of God if Jonah's heart had been willing. If he'd have been a joyful participant in spreading God's Word, what might have ancient Babylon and Assyria looked like?

We have no way of knowing how history might have changed if Jonah's attitude had been one of loving service to God instead of coerced speech. Although, if we pay attention, we can see the implications of our own lives when we refuse to live up to the potential God has placed within us.

It would seem Jonah couldn't get past his dislike of the Ninevites, but feelings of hatred and animosity are only one of the things that keep us from being all we can be in Christ. Sometimes we feel inadequate like Isaiah and Jeremiah who became two of the greatest prophets of the Old Testament. Other times we focus on the wrong thing. We're zealous and busy for God, but we aren't doing what God has called us to do, much like Paul before Christ stopped him on the road to Damascus. Some want fame instead of changed lives as did Simon who wanted to buy the power of the Holy Spirit (Acts 18), and others simply wait for someone else to step up and do the work like the Grecian Jews in Acts 6.

I've allowed many of these "excuses" keep me from being all I can be in Christ throughout the years. Fortunately, the Holy Spirit spoke to me and helped me realize I can choose to put all of those excuses behind me and change my attitude. Instead of being like Jonah and running the other way when God calls, we can be more like Mary whom God chose to fulfill her potential by carrying and giving birth to the Savior of the world. When we hear Christ's Spirit moving us to do something bigger than we think we're capable, instead of grumbling or running, we can respond, "I am the Lord's servant," and we can mean it when we tell God, "Let whatever you say, happen to me."