Wiccans celebrate these moon cycles by observing Esbat. Esbats are composed of many elements -- ritual, spell casting, divination, healing and dedication to name a few. Honoring Goddess holds a primary place in the rituals of Esbat.

Celebrating Esbat brings Wiccans closer to Goddess and provides power to rituals. Covens generally meet during an Esbat but a solitary witch can hold her own rituals to honor the moon's cycles.

Meaning of the word "Esbat"

The word "esbat" derives from a Greek word, "estrus", meaning "of the month."

Wearing clothing is optional during many Pagan ceremonies, but local laws and the weather dictate that most of us should dress for Esbat. Robes or cloaks are more than appropriate. Practitioners choose robe colors according to the type of magic that they intend to practice during the ritual.

Esbat and the Moon

Each phase of the moon offers an opportunity to hold an Esbat. Some witches choose to observe Esbat weekly, on a day corresponding with one of the phases of the moon. Others Wiccans only celebrate once a month -- most commonly during the full moon. Since monthly observance is most common, this lens will focus on full moon Esbats.

The moon draws its power in WIcca from Goddess. Her cycle of life and fertility mirror the lunar cycles: New Moon = Child, Waxing Moon = Maiden, Full Moon = Mother and Waning Moon = Crone. The close association between Goddess and the moon makes Esbat a sacred rite for Wiccans.

Full moons contain the most power in the lunar cycle, one reason many Wiccans choose to observe Esbat during this lunar phase. Witches use this additional power to boost the efficacy of their spells. Tap the power of the full moon for two days before and two days after the actual moon phase.

Spells involving healing, love and protection are especially effective during the full moon. The full moon also helps with divination. Many Wiccans choose to dedicate themselves to the Goddess at this phase of the moon.

Altars are the focal point of any Wiccan working. Use white and silver, color correspondence for the Goddess and the moon, in your altar elements for Esbat.

Every Wiccan should possess some basic tools of the Craft. The altar cloth and pentagram are an integral part of ritual. 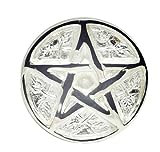 New Age Pentagram Altar Brass with Silver Plating Tile,3-Inches
Pentagrams are the essential symbol of Wicca. Place one in the center of your altar. I have this tile on my own altar. It's a nice size -- big enough to be seen but small enough to leave room for other elements of the altar.
Buy Now 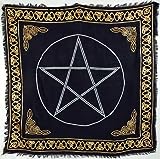 Black and Gold Pentagram Altar Cloth 36" by 36"
Your altar should be covered by an altar cloth. Buy or make one that uses natural fabric.
Buy Now

This section will be expanded as I update the lens. Stay tuned for expanded information.

More Esbat Items for Your Altar 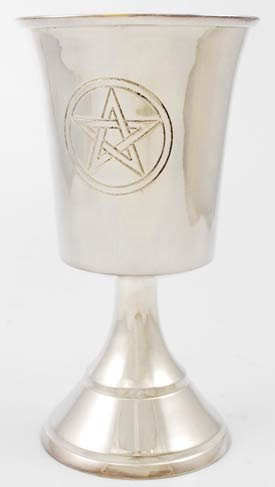 NEW Pentagram small 5" Chalice (Chalices)
Use your chalice for the wine and cakes ceremony. I use water instead of wine -- use whatever drink you wish.
Buy Now

An Invocation for Esbat

White lady of the night,

Bless your servant in her work,

And lead us into light.

Bless the candles, bless the bell,

Bless the cauldron and bless this spell.

What love can do.

And lead us down the Path to You.

Wicca: A Guide for the Solitary Practitioner
I rely on this book to guide my rituals. Scott Cunningham is a wonderful writer. Both the beginner and the experienced practitioner will benefit from this book.
Buy Now

A Year Of Esbats: Celebrating The Goddess During The Full Moon
Novices will find outlines to rituals in this book. Use it as a jumping off point to craft your own rituals.
Buy Now

How do you celebrate the full moon?