Every Man's Battle: Winning the War on Sexual Temptation

Can Men Help Being Unfaithful?

We’ve heard it all when it comes to men and their supposed inability to restrain themselves in the face of sexual temptation:

All of the above are the ravings of ill-disciplined men who refuse to restrain their passions.

Mark Twain, a man himself I must point out, so wisely surmises however that, “There are several good protections against temptations, but the surest is cowardice.”

In other words, men shouldn't attempt to court the source of their sexual temptation and expect to win. Some of the most upright and strongest men have lost that battle before. So RUN AWAY (yes, with capital letters) from sexual temptation!

Fidelity in Relationships - Men CAN Do it!

5 stars for Every Man's Battle: Winning the War on Sexual Temptation 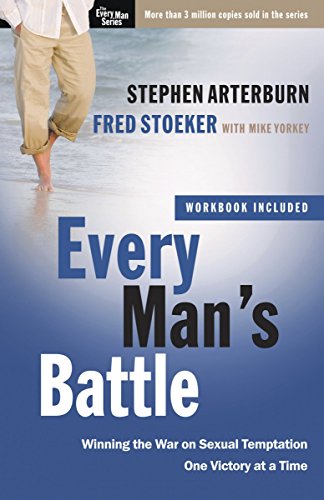 Every Man's Battle: Winning the War on Sexual Temptation One Victory at a Time (The Every Man Series)
Buy Now

What's GREAT about this book!

There are many things that I love about this book, including the fact that:

1. It is written by two (2) men, with contributions by a third man, who openly share about their own struggles with sexual temptation. This in my opinion serves as real encouragement for other men, since the authors truly empathize with men and the sexual temptations that they are faced with in their daily lives; mortal men reaching out other mortal men just like themselves.

2. It doesn't pretend that sexual temptation is some unspeakable perversion that God fearing men shouldn't even entertain or speak about or have problems with.

3. It encourages men to confront a problem that is as old as creation itself...
that's trillions of years.

4. It doesn't pretend that the problem of sexual temptation will go away anytime soon or that it will just go away in one heartbeat or that men will gain victory over it in one attempt.

5. It provides effective solutions and help from other men who likewise have struggled with the very same sexual temptations but are gaining daily victory over them.

6. Some very brave men had the courage to, not only tell their stories, but challenge and encourage men to not accept sexual temptation, promiscuity and infidelity as a man's given way of life.

This book is a thoughtful and uplifting gift for any man in your life - husband, boyfriend, father, adult son, nephew or godson, friend, colleague.

Every Man's Marriage: An Every Man's Guide to Winning the Heart of a Woman (The Every Man Series)

This book is about men helping other men become the best husbands they can be to their wives based on their own personal struggles and experiences. It makes a great wedding, anniversary or birthday gift for any man.

Fight: Winning the Battles That Matter Most

From a man’s perspective and using God’s Word, how to fight for all that’s good in their lives with the aid of three (3) powerful tools - faith, prayer, and the Word of God.

'Every test that you have experienced is the kind that normally comes to people. But God keeps his promise, and he will not allow you to be tested beyond your power to remain firm; at the time you are put to the test, he will give you the strength to endure it, and so provide you with a way out'.1 Corinthians 10:12-14

Are You Currently Struggling With Temptation?

T. D. Jakes, in his usual candid and down–to-earth manner, speaks about some often unspoken about and seemingly baffling man-behaviour. He-Motions is available both in DVD and book form. In DVD form, it makes great listening while driving anywhere. In book form it is good contemplative reading in your ‘man cave’.

MEN!!! Say what you need to say here!