The Mahabharata has been retold and rewritten multiple times. It has inspired every generation of artists. Though the storyline and the characters are same, the Mahabharata has different versions in textual treatment, audio-visual format or metaphoric representations. 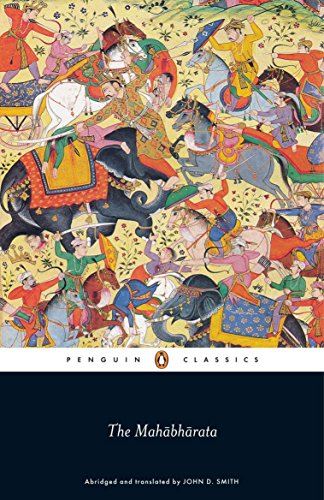 Peter Brook’s The Mahabharata is an enactment of the entire epic saga with an international cast and crew. It has been performed in French and English versions in the US, Europe, and Asia. Peter Brook and screen writer Jean-Claude Carriere created three separate plays, nine-hours in total (1985), a three-hour TV version and a DVD release, at just over five hours. The DVD released in 1989 by British Film Institute is a film adapted from a stage production by Peter Brook and Jean-Claude Carriere, and the screenwriters include Brook, Carriere and Marie-Helene Estienne.

Peter Brook’s The Mahabharata (1989) has three parts: The Game of Dice, Exile in the Forest, and The War. It is not exactly a film, but a drama shot into a film. It begins with a boy walking into a sanctuary. He spots an old man who says he has composed a saga of the boy’s race. Then there comes elephant-headed Ganesha, and performs the role of a scribe. Veda Vyasa acts as a narrator and the boy accompanies him in different time and space, he is actually the audience’s wallowing mind. In the final scene, Vyasa completes his ‘poetic history of mankind,’ and says to the boy, “You are the son of Abhimanyu. Abhimanyu was the son of Arjuna, the bravest warrior of the time, and grandson of Indra, the Lord of heaven.” And Lord Ganesha hands the manuscript to the boy.

The Mahabharata was filmed entirely in a studio in Paris. Background score is eastern classical and not Indian in its entirety, and costumes a kind of Indian. Very like in a play, some characters change apparels and performs another role, for instance, Ganesha takes out his elephant-face mask and smiles Krishna’s smile. Krishna, the reincarnation of Lord Vishnu, is also the cousin of Arjuna.

Drona is Arjuna’s guru yet he says, in the time to come if you have to fight me, fight. And later during the battle Arjuna and Drona fight not like enemies but playful brothers. After killing Dushasana, Bhima drinks his cousin’s blood and says ‘my enemy’s blood is more delicious than mother’s milk.’

One of the central characters Amba, who later reincarnates as Sikhandin, says hate keeps me alive. She goes to meet Bhishma on the eve of his fall, he says to her, ‘I wait for you every night.’ Amba replies, ‘No one wants to fight with you, so I climbed the mountains seeking to know how death can outwit death...’

Undoubtedly, the most provocative point in the film is the screenplay and compelling dialogues.

In this stylized production semiotics of theater are present everywhere. Sikhindin is afraid to kill Bhishma, Arjuna raises his bow, and Lord Krishna holds the arrow, slowly carries towards Bhishma and strikes him. Drona, hearing his son’s death, raises a mud pot above his head, blood pours over his body, and he sits cross-legged. Such kind of theater grammar is maintained in many scenes, giving us the constant feeling that it is a play.

Peter Brook (in full Peter Stephen Paul Brook) was born in March 21, 1925, London, England. He is the famed director of Shakespeare's. His contribution to the 20th century's avant-garde theatre is significant.

Peter Brook introduced the avant-garde plays of Jean Cocteau and of Jean-Paul Sartre in England. His unconventional style and staging shocked the world when he directed Jean Genet's Le Balcon (1960) and Peter Weiss’s Marat/Sade (1964). In 1967, Brook directed the film version of Marat/Sade.

Peter Brook moved to Paris in 1970 and established the International Center of Theater Research.

He directed and produced The Mahabharata in 1985. Regarding his three part 9 hours play based on Hindu Epic Mahabharata, Peter Brook says, he ‘was not attempting to reconstruct Dravidian or Aryan India of three thousand years ago but trying to celebrate a work which carries an echo for all mankind.’

‘Theater occurs whenever someone crosses neutral space and is watched by another person,’ says Peter Brook. He has also directed films and TV series. Brook’s latest work was 2002 BBC television production of Hamlet.

The Mahabharata is the heart of Hindu culture, religion, myth, and legend. In Nepal and India – predominantly Hindu nations – the Mahabharata has been rewritten by many modern writers and filmed and performed multiple times.