The author is a young schoolboy who loves reading and is very much interested in visiting historical places.

The Rajarajeshwara temple a historical temple and is located in Thaliparamba in Kannur district, Kerala, India. Rajarajeshwara means emperor of emperors – the supreme lord. It is believed that in olden times even the sage Narada, sage Parashurama and sage Sanaka (son of Lord Brahma) have worshipped in this temple, it is also believed that after his victory from Lanka lord Shree Rama stopped here to worship Lord Shiva. So as an honour to Lord Rama the devotees are still not allowed to go inside the Namaskara Mantapa. It is believed that this temple was built long-long back, going back to Treta Yuga (era). During the time when the gods churned the holy nectar this temple emerged out from the holy nectar, but was not fully developed and was then reassembled by the demigods, but still was not fully developed, so it was reassembled again by Sage Parashurama in the Treta yuga itself. Then it was grandly refurbished by the Raja of the Cholas. Now in the 1010 AD, it was again refurbished by the Maharaja of Travancore (present-day Trivandrum).

Bilva (Aegle marmelos or Indian bael) leaves are not offered to the deity instead Tulsi or Basil leaves are offered. One more speciality is the main deity is not taken out of the temple premises and there is no temple festival like other temples.

Sage Parashurama was an eminent devotee of Lord Shiva, he installed the Shiva's idol and so it is considered as a shiva temple. The Shiva Linga (Shiva’s idol) which is worshipped, is of several thousand years old.

As Parashurama gave a lot to this temple he is considered a lot in this temple and a worshipping corner for him is attached to the main temple.

It is also the oldest Shiva temple of Kerala. It is one of the 108 ancient Shiva temples in Kerala, it is also one of the famous Shiva temples in South India and it has tallest spire (shikhara) amongst the temples of ancient Kerala. It has an architectural blend of ancient Cholas and is of traditional Kerala style. It is regarded as one of the ancient Shakti peetham. If you look into the architecture of normal forts in this world they are entirely different from the architecture of this temple. Even the fort of this temple has a rare architecture. The first is the art of the cut-stones are finer and artistic, which is lacking in the other forts and historical buildings.

The literate stone which makes the geography of the region is utilized for the building various structure. These structures are strong and long-lasting. Even the ponds are dug by cutting off the stones making steps to climb down to the pond for having a bath.

If you want to give some donations to the temple deity you may visit the front office and offer them at the counter. It is not only that but you may also ask any queries to them (you may know something more than what you are reading here).

It is said that the Maharajas of Travancore used to offer an elephant to this temple before they ascend the throne. The present elephant, named Ganapathi was given by the Chief Minister of Karnataka B.S Yeddyurappa as an offering to this temple before the elections. This Elephant is used to carry an idol of the Lord with musical tuning in the day of Shivarathri.

The day of Shivarathri (as it was said that Lord Shiva drank poison to save the world) is very auspicious in this temple and the temple is decorated, filled with devotees. There are many cultural programs like cultural dance, Kathakali and other cultural programs. The temple elephant is brought out from its usual place and is made to carry the idol round the temple with music and triumphs.

Those who are visiting this place from different locations may have the following items in their travellers kit. A bottle of clean drinking water. This is because this humid hot region may cause some waterborne impurities which may cause some health problems to the tourist from other locations. The open area of the temple site gets hot and walking becomes difficult due to heat. Some of the places are covered with carpets. But most other locations are exposed so wearing fresh socks may I help you to walk on the hot substratum. Wearing caps also may protect you from direct sunlight. I think of carrying this before planning a trip to Taliparamba temple 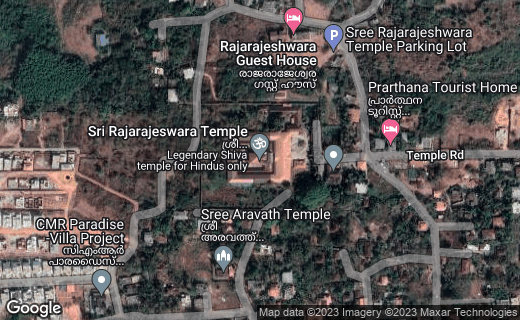