I was fascinated to read this true story told by the Rev. Jacob Chamberlain of his nearly 50 years of work in India as a missionary of the Dutch Reformed Church. My own family having missionary roots, I never tire of hearing missionary stories, and Chamberlain tells it better than most. He talks of arriving at a certain village of India after a hazardous journey on foot through miles of jungle territory. The persons guarding the gates of the city offer him a thatched roof hut in which to rest a while before entering the city. Some time after lying down to rest inside the hut he opens his eyes to find himself looking in the face of a very large snake that is approaching from above, inside the roof of the hut. With much exertion he manages to club the snake to death. The persons at the city gates, upon learning that he has killed the snake, are amazed and he is ushered into the city with great acclaim. No one but God Himself could have staged such a grand entrance for the missionary to India.

In the Tiger Jungle 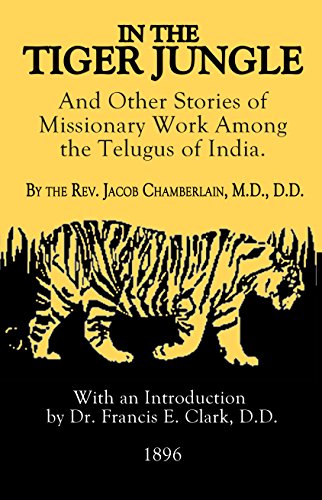 In The Tiger Jungle: And Other Stories of Missionary Work Among the Telugus of India
Buy Now

Chamberlain says: "When the heat of the day was over we all went into the town to preach. At the gate was the village crier with his tom-tom, or small drum; and as soon as we appeared he went through all the streets beating the tom-tom and crying, "Come, all ye people; come and hear what the serpent-destroyer has to say to us." A royal audience we had, while we spoke to them of the "old serpent" and his deeds, and Christ, who bruised the serpent's head. The killing of the serpent, instead of proving a bar, had opened a door of access to the gospel."

Mr. Chamberlain (1835-1908) was a graduate of Western Reserve College (1856) and graduated from a Dutch Reformed Church seminary in 1859. He also studied medicine at the College of Physicians and Surgeons in New York, and was ordained a minister of the Reformed Church in May of 1859. The same year he married Charlotte Birge and their six sons were all born in India. He arrived in India April of 1860 and three years later established the mission at Madanapalle, a city that served as his headquarters for the rest of his life, even though he often traveled throughout the countryside preaching and administering medical care. Madanapalle was the place where he died in 1908, surrounded by his family and thousands of persons whose lives had been transformed through his ministry. Says his biographer, "Thus by a series of gracious providences was it made possible for the long-cherished and often expressed desire of his heart to be gratified. 'It has been my earnest prayer for years,' he wrote while in this country in 1900, on hearing of the death of one of his associates in India, Dr. John Scudder, 'that I may be summoned up from the forefront and my mortal remains laid to rest among ‘my people’ at Madanapalle.'

Mr. Chamberlain wrote three books during his ministry, all of them for an audience of American Christians, to encourage the faith of those on whose financial support the missionary work depended. In these books, Chamberlain certainly provides a clear vision of the purpose of Christian missions and what could be accomplished as long as financial support and motivated individuals were available to meet the staggering needs of pagan nations.

The Story of 19th Century Missions

"But the gospel seed is scattered. Some of it finds its way into unseen cracks and crevices; it is not noticed; no one takes the trouble to root it out. The gospel seed is germinating in thousands of unsuspected places. It is already, almost unnoticed, here and there towering over the gopurams of heathenism. Day by day are we introducing the seed into new crevices. Some will never take root. It has ever and everywhere been so. Some will grow."

In the Tiger Jungle

Other Examples of 19th Century Missionaries