Why I'm making this page about God's mercy and grace:

I'm making this page about God's mercy and grace to help you more fully appreciate these two wonderful attributes of God and what they both mean to us both for salvation and for daily living. I'm also making this page in order to point out the differences between mercy and grace, as it is quite easy to confuse the two or to think of them as exact synonyms, when in reality, although similar, they are still quite different both in meaning and in application.

Mercy is negative concept. Wikipedia defines mercy as a "broad term that refers to benevolence, forgiveness and kindness." In the Greek, it has the sense of having pity or compassion and showing kindness, but a more succinct, common and practical English definition of mercy in relation to God is that MERCY IS GOD NOT GIVING TO US WHAT WE DESERVE. (The picture to the right shows one Old Testament example and picture of God's mercy from the Biblical book of Esther. The king is extending his scepter to Esther in mercy, though, according to the royal decrees, she deserved death for coming uninvited.) Another Old Testament example is the city of Ninavah, which deserved to be destroyed because of its sin and wickedness, but God, in mercy, sent His reluctant prophet, Jonah to warn them, and, when they repented, spared them from physical destruction, to the dismay of the prejudiced prophet.

But, exactly what do we mean by saying that mercy is God NOT giving to us what we deserve? How does it apply to us? It applies both to our eternal salvation and our everyday living. I will now explain further in reference to each.

A. God's mercy in reference to our forgiveness and eternal salvation:

In reference to our eternal salvation: since we are all sinners, we all deserve to spend eternity in a Godless hell, but God, in a supreme act of mercy, gave his only son in order to save us from that fate. Since God is righteous, He could not just overlook our sin. There had to be some payment for it, so he sent His only son, Jesus, who took our punishment upon himself on the cross, so that we could be spared the eternity in hell which we all deserve. Thus, in reference to eternity, mercy is God, on the basis of Christ's sacrifice, NOT giving us the eternal punishment we deserve.

See how Jesus' last words on the cross speak mercy for us:

B. God's mercy in reference to our everyday lives:

In reference to everyday life, we always deserve to suffer the consequences of our bad actions, but often, by the mercy of God, we are spared them. We need to be thankful for these times and not resent the other times when we do suffer the consequences of our actions. For example, you should be thankful for all the times you ran a stop sign or red light or were speeding and didn't get caught, instead of complaining about the one ticket you did get. I'm sure if we thought about it, all of us could come up with several more examples of God's mercy in our everyday lives (not letting us suffer the consequences of or bad acts). A line from one my favourite hymns says: "Morning by morning, new mercies we see," and the Bible says in Lamentations 3:22, "It is of the Lord's mercies that we are not consumed, because his compassions fail not." The book listed below gives some specific examples of finding God's mercy in the details of one woman's everyday life.

Searching, you can probably find a few books which show how we can and should "seek out God's mercies in the ordinary, often imperfect moments that shape our everyday lives." and how that if you look for it, you will see many instances of God's mercy in your everyday life.

While mercy is primarily a negative concept, grace is a positive concept. After pointing out that different faiths view it differently, Wikipedia simply says that it is "something that is God-given," and Webster's defines it as "unmerited divine assistance." In the Greek, it has the sense of favor toward someone with a focus on a benefit given. To put it more succinctly and practically, and in relation to God and in contrast to.mercy, GRACE IS GOD GIVING US WHAT WE DON'T DESERVE.

A. God's grace in salvation: As a result of our salvation, God gives us:

Read and /or listen to more on the grace of God in salvation and beyond:

You should be able to find at least a few books by preachers and lay authors which cover all aspects of God's grace in the salvation process, from salvation proper through sanctification (being set apart for God) and our being set free, showing how God's grace is sufficient for everything we face in life. Below is a message from one of my favorite grace preachers, Joseph Prince, on what he calls the grace revolution. You can also hear him on your local Christian T.V. station. I have leared much by listening to his preaching.--JMB

Listen to this message from Joseph Prince on the Grace Revolution:

B. Grace in our everyday lives:

Since, as the above resource shows, God' grace is sufficient for everything, we can also experience the grace of God in our everyday lives, as we realize the many blessings, both Spiritual and physical an material that He bestows upon us, for which we were not worthy or deserving, but that He gave to us only because of His goodness and love toward us. Actuaslly numbers 5 through 8 in the above list could also fit here. We don't deserve to be have the ability to do right, because as sinners, by rights, we should be allowed to wallow in our wrong doing and suffer the consequences of it, but, instread, by grace he enables us to do right. Also, since we are sinners, we deserve to have our eyes blinded to the truth of His word, but instead he gives us illumination to understand it. And, as sinners, we don't desreve to have our prayers answered, but he does answer them. Finally, we don't desreve the gifts of His Holy Spirit, but, in grace, he gives them to us so that we might function effectively in His church.

For more comparisons between mercy and grace, listen to this brief message from WatermySoul

God offers His mercy and grace to us, but we must accept them into our lives.

IV: Mercy and grace vs law.

In Ephesians 2:8, Paul tells us that we are saved by grace through faith and in Galatians 2:16, he further points out that it is not by the works of the law. In Romans 8:3, he says further that the law could not save us since it was weak through the flesh, but he goes on to show that through grace "the righteousness of the law is fulfilled in us." (vs.4). This whole section of scripture along with the entire book of Romans (see below), as well as that of Galatians, serve to point out that mercy and grace achieve what the law could not: true righteousness.

Check out this message on grace & Law from Joseph Prince:

--Read more on the relationship of law and grace:

Check out the work listed below by the respected Bible teacher, Alva J. McClain Having been a dispensationalist, he holds the common view that Christians are not under the law. He even goes as far as to go against the modern trend to divide the law into 3 sections: moral, ceremonial, and civil, and thus, since he views the law as a whole entity, he feels that we can not place a Christian under just the moral law because one cannot divide the law. He also quotes from Paul's letters to the Romans and the Galatians which support the fact Christians are not under the law. 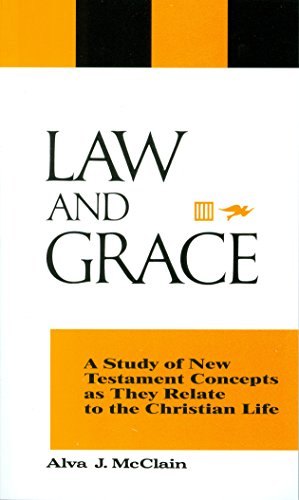 Have you experienced the mercy and grace of God?

If you answered no, you might want to check out these hubs as well: