All Is Well With My Soul: The Spafford's Story

One who gains strength by overcoming obstacles possesses the only strength which can overcome adversity.

This song still resounds with a voice through the ages...reminding me that no matter how rough things get---All is indeed well with my soul.

As new challenges come up in my life, I cannot help but return to this song and be reminded that life does bring us unpleasant things but with the right attitude and God's help, all will be well. 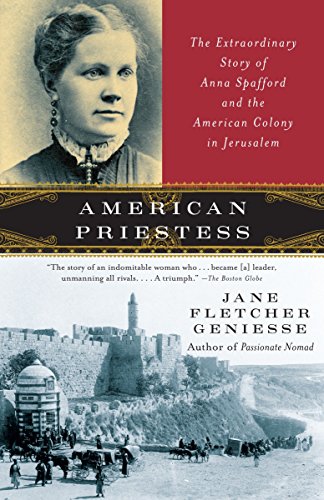 American Priestess: The Extraordinary Story of Anna Spafford and the American Colony in Jerusalem
Buy Now

Every day someone's life is changed in some way by an unexpected challenge. An unwelcome, unwanted challenge. Often these challenges cause confusion and uncertainty.

Even those who find their strength from their belief in God and call upon Him for strength often struggle to make sense of what has befallen them or their family. Such a reaction is not surprising nor should it be considered a lack of faith

We are after all humans and when we face hard times in our lives it will give us pause.

The story of Horatio Spafford will serve as a reminder to us that when devastating circumstances befall us it is possible to find peace and even renewal. Often if we look around we find that even though we face catastrophic illness or other life-changing circumstances there is almost always someone who is in a worse situation than what we face. That does not make it more bearable but it does put it in perspective.

Try to be still and listen, 'all is well with my soul.'

In the 1860s, Horatio Spafford lived in Chicago with his family. Horatio had become a prominent lawyer. He was involved with many activist groups of the day. He was especially interested in the work of the abolitionists.

Horatio was a devout Christian and served as an elder in the Presbyterian Church. He often entertained Dwight Moody in his home. Moody was a prominent evangelical leader of the day.

Despite the fact that they were now not a family of great means, they used what they had to help others whose struggle they felt was worse than theirs.

Anna Spafford, Horatio's wife was not in good health by 1873. The toll of the loss of their son had left a void in her life. It was decided that to help her recover a change of scenery might be well advised.

They would sail on the Ville du Havre to Europe with their four daughters. The trip would give Horatio the opportunity to visit Europe and to help Moody with a revival that he was conducting in England at the time.

The trip was scheduled to depart in November. However Spafford was unable to sail with the family. A business emergency had come up. at the last minute. He ushered them off and wished them bon voyage and told them he would follow shortly.

Water in Our Lives is not Always This Calm

If we cannot believe God when circumstances seem be against us, we do not believe Him at all.

The Waters Claimed the Daughers

A horrible accident occurred. The Lockhearn, a British steamer, rammed the Ville du Havre and it sank in less than fifteen minutes. Two hundred and ninety of the three hundred seven passengers perished. Among them were the Spafford girls.

Anna survived in a way that can only be described as miraculous. She was found unconscious on a plank that happened by. Her baby had been ripped out of her arms. She was able to grab onto her clothing for an instant only to have her baby daughter snatched from her again by the debris that surrounded them.

Reached out to Others in a New Land

Goodness tried to prevail in the midst of this devastation. A young man had tried to pull the three Spafford daughters onto a plank with him. He had them try to hold onto his clothing. They struggled to survive but it did not happen.

Anna was inconsolable and some feared she may try to end her own life. There came a time when she heard a voice say : "Anna, you have been saved for a purpose!"

It was at this time she recalled what someone had once said to her. The words had been that it is easy to be thankful when all is well but 'take care that you are not a fair-weather friend to God.'

After the tragedy and Anna and Horatio were together again, they became parents of three more children. Their son, Horatio, was born in 1876 and was named for the son who had died at the age of four. It seems the irony of fate steps in to lives. At the age of four, this Horatio, died of scarlet fever just as his brother had 6 years earlier.

Anna and Horatio were blessed with two more children, both of them girls. Interestingly enough the Spafford decided to move to Jerusalem. In 1881 they traveled to Jerusalem and began to work to help others. There mission was to 'serve the needy, help the poor, care for the sick, and take care of homeless children.' Their work was praised and their settlement was became known as the American Colony.

The words of this daughter serve well to explain some of the mystery of Horatio.

"Bertha Spafford Vester wrote the following in her book, "Our Jerusalem"

'In Chicago, Father searched his life for explanation (for the devastation that had befallen the family). Until now, it had flowed gently as a river. Spiritual peace and worldly security had sustained his early years, his family life and his home. All around him people were asking the unvoiced question: 'What guilt had brought this sweeping tragedy to Anna and Hoaratio Spafford?'

(Notice the spelling she used of Horatio.)

"Father became convinced that God was kind and that he would see his children again in heaven. This thought calmed his heart, but it was to bring Father into open conflict with what was then the Christian world. To Father, this was a passing through the 'valley of the shadow of death'. But his faith came through triumphant and strong. On the high seas, near the place here his children perished, he wrote the hymn that was to give comfort to so many.'

These are the words Horatio penned.

Though Satan should buffet, though trials should come, Let this blest assurance control, That Christ has regarded my helpless estate, And hath shed His own blood for my soul. My sin, oh, the bliss of this glorious thought! My sin, not in part but the whole, Is nailed to the cross, and I bear it no more, Praise the Lord, praise the Lord, O my soul! For me, be it Christ, be it Christ hence to live: If Jordan above me shall roll, No pang shall be mine, for in death as in life Thou wilt whisper Thy peace to my soul. But, Lord, ’tis for Thee, for Thy coming we wait, The sky, not the grave, is our goal; Oh, trump of the angel! Oh, voice of the Lord! Blessed hope, blessed rest of my soul! And Lord, haste the day when my faith shall be sight, The clouds be rolled back as a scroll; The trump shall resound, and the Lord shall descend, Even so, it is well with my soul.

On Sundays when we sing this hymn. It is often difficult to get through the it without weeping. They are not tears of sadness. The emotion is brought on by my recognition that all is well with my soul. I, too, like others do face adversity.

The journey through adversity is long and troubling and sometimes lonely. It is a process not unlike the grief process that we endure when faced with someone's death. Especially when faced with illness that invades lives and remains there for years and years. Facing the disease and all that it means to the family is the first step. Coming to terms with all that a catastrophic illness means is daunting. This is a difficult road to travel.

For me, somewhere about 5 years ago, I realized I could no longer deny the turmoil that I felt each day. Through all of those years I had prayed and believed but had not allowed the feelings to reach my soul. Inexplicably I began to feel the 'peace that passes all understanding.' No longer did I feel the same kind of overwhelming panic that would creep in and steal some part of each day.

All is well with my soul.

I have learned to not to try to second guess the future. Waking up each day, being thankful for the minutes given for that day, and enjoying each moment with those in my family who have had the uninvited illness establish itself in their lives that is how I try to live. That is how I feel that my soul is well.

That does not mean that I do not crash and burn periodically. I do. Because as the Momma and the grandma there is still a part of me that thinks I should be able to fix anything that is wrong with my family. Realistically I know that is impossible. I try not to allow myself to sink back into that thinking. It is at that time that I pick my pieces back up and go forward knowing that I God walks with me and often carries me through this unsettling time.

For the most part, all is truly well with my soul. It is a journey.

In my Broadman Hymnal of my youth

When I was a young girl I attended a Baptist Church. The Broadman hymnal pictured above was the the one we used. This particular hymnal was published in 1940. I do not remember singing It is Well with My Soul as a child.

It is found in this hymnal on page 73. When I found it just a day or so ago, I knew that it belonged in this article. Mr. Spafford's words were shared so that many could know the peace this hymn offers.