Quotes About Death Can Actually Help With The Grieving Process

When pen is put to paper to write down quotes about death there is always a small part of you that feels creeped out - and then you actually start to read the words. The more of these types of quotes you read, the more you realize that they are really talking more about life and the emotions we feel when someone passes away. That is why they are so popular with people giving funeral speeches or sending condolence cards.

If you ever find yourself in the uncomfortable position of having to give a eulogy or sending a sympathy card to someone you know then you can do a lot worse than consulting an article like this one. We all know that it can be hard to put our feelings into words, especially when we are grieving for the one who was lost just as much as anyone else. There should be no shame in borrowing some of the wisdom you find below. They were, after all, at one time or another used by someone who was in the same position as you. Someone just trying to find the right words to console a friend or family member.

Have you ever used death quotes to help convey your condolences?

The one song in particular that I would like to talk about is "Dance With My Father" by Luther Vandross. When I lost my dad to Cancer this song immediately popped into my head. I had the song on my computer and after just looking at the file for over an hour I finally clicked on it. I cried through the whole song and felt a lot better after it was over. Music can heal, don't overlook this fact. 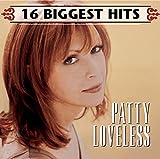 How Can I Help You Say Goodbye
Buy Now

All you to do is have compassion in your voice.

1-Death stands above me, whispering low, I know not what, into my ear;

Oh! His strange language, all I know is; there is not a word of fear. ~Walter Savage Landor

2-When you look at a corpse you can always sense your own breath better. ~Zona Gale

3-We are mere notes in a piece of music played by the angel Death-heard and lost. ~Austin O’Malley

4-Time rushes towards us with its hospital tray of infinitely varied narcotics, even while it is preparing us for its inevitably fatal operation. ~Tennessee Williams

5-He who doesn’t fear death dies only once. ~Giovanni Falcone

6-We sometimes congratulate ourselves at the moment of waking from a troubled dream: it may be so the moment after death. ~Nathaniel Hawthorne

7-Death is a debt we all must pay. ~Euripides

8-Death is a challenge. It tells us not to waste time… It tells us to tell each other right now that we love each other. ~Leo Buscaglia

9-I shall not die of a cold. I shall die of having lived. ~Willa Cather

10-To the well-organized mind, death is but the next great adventure. ~Albus Dumbledore by J.K. Rowling

11-The timing of death, like the ending of a story, gives a changed meaning to what preceded it. ~Mary Catherine Bateson

13-Death’s gang is bigger and tougher than anyone else’s. Always has been and always will be. Death’s the man. ~Michael Marshall

14-From my rotting body, flowers shall grow and I am in them and that is eternity. ~Edvard Munch

15-A dying man needs to die, as a sleepy man needs to sleep, and there comes a time when it is wrong, as well as useless, to resist. ~Stewart Alsop

Greeting Cards Are A Great Choice If You Can't Come To A Funeral - Just be sure to write more than one sentence in them. 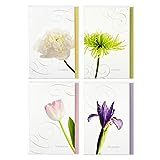 Inspirational Quotes and Sayings About Death and Dying

16-There is a Reaper, whose name is Death,

And, with his sickle keen,

He reaps the bearded grain at a breath,

And the flowers that grow between. ~Henry Wadsworth Longfellow

17-If death meant just leaving the stage long enough to change costume and come back as a new character - Would you slow down? Or speed up? ~Chuck Palahniuk

18-Life is not lost by dying; life is lost minute by minute, day by dragging day, in all the small uncaring ways. ~Stephen Vincent Benet

19-Cowards die many times before their deaths.

The valiant never taste of death but once. ~William Shakespeare

20-Death may be the greatest of all human blessings. ~Socrates

21-Death is a very dull, dreary affair, and my advice to you is to have nothing whatsoever to do with it. ~W. Somerset Maugham

22-It is only possible to live happily ever after on a day to day basis. ~Margaret Bonnano

23-Life is pleasant. Death is peaceful. It's the transition that's troublesome. ~Isaac Asimov

24-You should live every day like it's your last day because one day you're gonna be right. ~Ray Charles

25-Because of indifference, one dies before one actually dies. ~Elie Wiesel

26-Death is the dropping of the flower, that the fruit may swell. ~Henry Ward Beecher

27-Death is a delightful hiding place for weary men. ~Herodotus

28-The graveyards are full of indispensable men. ~Charles de Gaulle

29-It is a blessing to die for a cause, because you can so easily die for nothing. ~Andrew Young

30-Death is not the greatest of evils; it is worse to want to die, and not be able to. ~Sophocles

More Quotes About Death To Ease The Pain

31-Watching a peaceful death of a human being reminds us of a falling star; one of a million lights in a vast sky that flares up for a brief moment only to disappear into the endless night forever. ~Elisabeth Kubler-Ross

32-There are so many little dyings that it doesn't matter which of them is death. ~Kenneth Patchen

33-The idea is to die young as late as possible. ~Ashley Montagu

34-Have the courage to live. Anyone can die. ~Robert Cody

35-I live now on borrowed time, waiting in the anteroom for the summons that will inevitably come. And then - I go on to the next thing, whatever it is. One doesn't, luckily, have to bother about that. ~Agatha Christie

36-Men fear Death, as children fear to go in the dark; and as that natural fear in children is increased with tales, so is the other. ~Francis Bacon

37-Embalm, v.: To cheat vegetation by locking up the gases upon which it feeds. By embalming their dead and thereby deranging the natural balance between animal and vegetable life, the Egyptians made their once fertile and populous country barren and incapable of supporting more than a meager crew. The modern metallic burial casket is a step in the same direction, and many a dead man who ought now to be ornamenting his neighbor's lawn as a tree, or enriching his table as a bunch of radishes, is doomed to a long inutility. We shall get him after awhile if we are spared, but in the meantime the violet and the rose are languishing for a nibble at his gluteus maximus. ~Ambrose Bierce

39-We understand death for the first time when he puts his hand upon one whom we love. ~Madame de Stael

40-The day which we fear as our last is but the birthday of eternity. ~Seneca

41-To die proudly when it is no longer possible to live proudly. Death of one's own free choice, death at the proper time, with a clear head and with joyfulness, consummated in the midst of children and witnesses: so that an actual leave-taking is possible while he who is leaving is still there. ~Friedrich Nietzsche

43-Someday I'll be a weather-beaten skull resting on a grass pillow,

Serenaded by a stray bird or two.

Kings and commoners end up the same,

45-Yea, though I walk through the valley of the shadow of death, I will fear no evil: for thou art with me; thy rod and thy staff they comfort me. ~Psalm 23:4

Jewelry Sympathy Gifts Can Be Perfect - Under the right circumstances.

Years ago I actually bought a silver locket form my sister who had lost her son. I opened it and placed photos of her son inside and then put it in a small jewelry box. She hasn't taken it off since I got it for her. 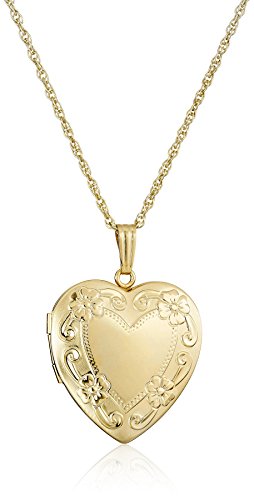 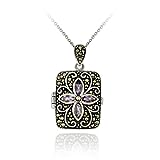 Where I Got Most Of These Great Looking Photos - The rest are marked.