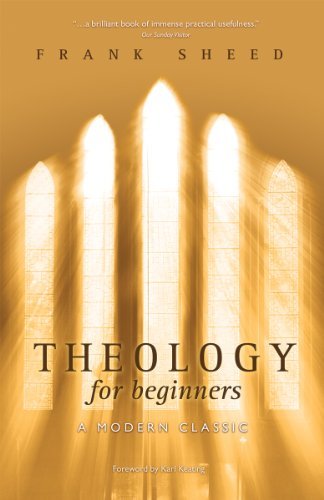 Theology is the study of God and of other elements from the point of view of their relation to God. In the second sense one may speak of a theology of history or a theology of law.

The term comes from the Greek theologia, meaning the science of God. It was first used by the ancient philosophers Plato and Aristotle to refer to the work of such early Greek poets as Homer and Hesiod, who told the stories of the Greek gods. The Greeks and other ancient peoples, such as the Egyptians, Persians, Chinese, Hindus, Hebrews, and early Christians, developed distinctive theologies embodying their views of divinity. Some theologians developed systematic disciplines combining doctrines based on faith with a counterbalancing emphasis on reason similar to that found in Greek philosophical thought. St. Augustine, one of the greatest theologians, employed concepts from Neoplatonic philosophy to express Christian teachings. The systematic and rationalistic approach was developed by such Jewish theologians as Philo and later Maimonides and by such Islamic thinkers as Averroes. Thus, the modern theologies of the various religions are similar in structure, if not in content.

Theology is divided into many specialized fields. Scriptural theology, for example, studies and interprets sacred religious texts. Christian theologians in this field often rely on the latest works of Biblical scholars and of such specialists as archaeologists, whose discoveries in the Holy Land are relevant to Biblical interpretation, and paleographers, who decipher such ancient writings as the Dead Sea Scrolls.

Other theologians are concerned with expressing the permanent doctrines, or dogmas, of their faith in a coherent and systematic fashion. This branch of theology, known as dogmatic theology or dogmatics, has been represented in Christianity by such famous thinkers as St. Augustine, St. Thomas Aquinas, and John Calvin. Some Christian dogmas covered by this field are the Incarnation of Christ, original sin, the nature of grace and the sacraments, and the nature and function of the Church itself. The particular study of the sacraments is called sacramental theology. The study of the Church has the specialized name of ecclesiology, from the Latin ecclesia, meaning church. Ecclesiology was a major concern of the Second Vatican Council in the early 1960's.

Natural theology, or the study of God by reason alone, without relying on a revelation through faith, is a part of philosophy. Many philosophers have developed natural theologies. Some of them have followed the 18th-century German thinker Gottfried Wilhelm Leibniz in calling this field theodicy.