5 Versions of the Lord's Prayer

There Are More Versions of This Prayer Than I Knew

Did you know there are many variations of The Lord's Prayer? Until a few years ago, I didn't. Many of us learned The Lord's Prayer as children, simply from hearing it, then saying it every Sunday in church. I was one of those children. By the time I was eight or nine years old, I could recite The Lord's Prayer by rote, along with The Apostle's Creed, the Doxology, the alphabet, and the multiplication tables. This is good, but it can also be bad. By that I mean that when we can recite something without even thinking about it, the meaning is often lost for us. That is what happened for me.

These days, I actually listen to the words and consider their meanings. For example, when we say, "...thy kingdom come, thy will be done..." we are actually saying that we want the Kingdom of God to come, and that we want God's will, not our own, to be done here on Earth, just as it is in heaven.

Over the years, after incorporating many readings into my daily prayer and meditation time, I have learned that there is more than one version of this beautiful prayer. Who knew? Unexpectedly, I continue to find more in my daily devotional readings.

I have done a lot of reading about prayer and relationships with God and Jesus over the last 9 or 10 years, and I have learned a lot. At times I found myself saying "I grew up in the church. I've been in church all my life. How did I not know this? How could I not know that?"

Some of those things are not related to The Lord's Prayer, nor to prayer in general, so they are outside the scope of this lens. Some, however, relate specifically to prayer. For example, did you know that it is not required that you be on your knees when you pray? I often pray while sitting in a chair, while driving, while standing, etc., but I always believed that I should be on my knees. According to Joyce Meyer, in her book The Power of Simple Prayer, it is "the enemy" who gives us these hard and fast rules to follow.

Something to Think About

When we say "forgive us our trespasses, as we forgive those who trespass against us", what we are saying is that we want God to forgive us in the way and amount that we have forgiven others. Ouch! What if we haven't forgiven someone? What then?

- that to forgive does not mean to pretend something never happened

- or that you can actually forget about it.

It does mean that you no longer hold it against the other person. It is similar to the way in which you might forgive a monetary debt: You may decide to tell the person that you have "forgiven" the debt. That doesn't mean you never lent the money. It just means you have decided it is not necessary for him/her to pay you back. In other words, you no longer hold him/her responsible for the debt. Forgiveness of slights or hurts can be thought of in this way. This does not mean it is easy to do, just that it can be done.

A Need for Prayers From the Heart, Without Flowery Language

In my daily prayer and meditation time, I have developed a more open two-way communication with God. I came to understand that God doesn't require our prayers to sound grand, only that they be from the heart. So I have come to be able to speak plainly, without flowery language in my prayers. I've changed some of the words for modernization, and added a couple of commas for clarity. Mainly, I noticed that most people say "...Your will be done..." as if that were the end of the sentence; as if there were a period after the word "done", and then pause before saying "...on earth, as it is in heaven...." There isn't a period after "done". It is one complete sentence. Some versions do show a comma after the word "done", and some have no punctuation there.

My Own Version, Developed as My Dad Lay Dying

In the summer of 2009, my dad died of cardiovascular disease. He was on a ventilator for several days. During much of that time, I was alone in an ICU consult room. I prayed almost continuously. It was not a time for flowery language. It was a time for direct communication. I prayed The Lord's Prayer and the Serenity Prayer repeatedly.

It's strange what goes through a person's mind at times of severe stress, and, always a stickler for correct grammar and for sentences that make sense, I began saying it to myself without pausing after "...your will be done..." and mentally making the changes as I've written below. I did this without even realizing I was doing it. It took a very long time (almost 3 years) for me to write it down.

Our Father in heaven,

honored be your name.

your will be done on earth,

as it is in heaven.

Give us, just for today,

and please forgive us our sins

as we forgive those who sin against us.

Lead us not into temptation,

For yours alone is the kingdom,

and the glory, forever.

The Lord's Prayer as I Learned it in Childhood

Our Father, who art in heaven,

hallowed be thy name.

thy will be done.

On earth as it is in heaven.

Give us this day

and forgive us our trespasses

as we forgive those who trespass against us.

Lead us not into temptation,

For thine is the kingdom,

and the glory, forever.

Did you learn The Lord's Prayer as a child?

Do you reserve time each day for prayer/meditation?

Our Father Who art in heaven,

hallowed be thy name.

Thy will be done.

On earth as it is in heaven.

Give us this day our daily bread;

and forgive us our trespasses

as we forgive those who trespass against us.

And lead us not into temptation,

Another Catholic version I've seen says, "...and keep us from the evil one" instead of "... and deliver us from evil".

This one leaves out a lot of the text. Too much, in my opinion.

Father, hallowed be your name,

Give us each day our daily bread.

Forgive us our sins,

for we also forgive everyone who

Our Father which art in heaven,

Hallowed be thy name.

Thy will be done,

As in heaven, so in earth.

Give us day by day our daily bread.

And forgive us our sins;

For we also forgive every one that is indebted to us.

And lead us not into temptation,

But deliver us from evil.

My problem with this one?

2. People are not "that". People are "who" Only inanimate objects should be referred to as "that".

This is my photo of my parents' old family Bible, which Mickie Gee is helping me to repair. The photo was taken before the now-in-process repair work began.

Is God a Which or a Who?

Above I said that God is "who", not "which or what", representing the difference between a being and a thing. On the other hand, we know that God is a spirit, neither male nor female. So, maybe "she/he" is a what or a which, after all. It seems simpler for our limited human minds to relate to a personified image of God, so we have given God a pronoun. Why don't we use "she", you ask? Ah, that's a good question.

I have both of the books shown below in my small personal library. Each one has helped me in its own way. I cherish each of them, and refer to them frequently. I recommend them highly to anyone who is trying to strengthen his/her prayer life.

This is a wonderful book that I discovered only a few months ago. It is one of the most reassuring, stress-relieving, and comforting books I have ever read. I recommend it highly. 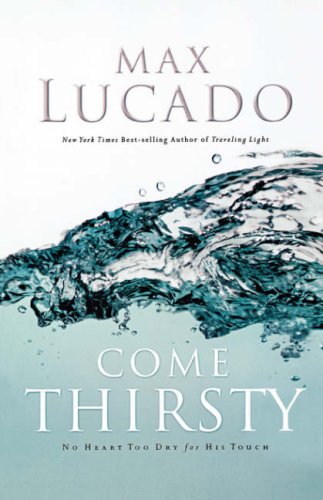 Come Thirsty: No Heart Too Dry for His Touch

I also enjoyed this one. The first chapter is written as a novel, but then Lucado gets to the meat of the topic. I especially like the way he explained how Jesus (Yeshua) took on our sins. He related it to the way a person can "carry" a disease without being sickened by the disease. For me, as a public health person, this analogy was particularly relevant.

Thank you for visiting this page and sharing my experience with prayer and meditation. I hope it has helped you in your prayer life, or at least, given you food for thought. Please feel free to share your thoughts on this topic, and please let me know you dropped by to visit.