10 Great Achievements at the Olympic Games

Here are some very inspirational achievements in the history of the Olympic Games. Whether it was overcoming great personal battles or getting the most Olympic medals, the stories of these athletes should not be forgotten.

There are, of course, more than 10 great Olympic achievements so the choice was difficult and surely debatable. But here are at least 10 great achievements at the Olympic Games.

Larisa Semyonovna Latynina is a Russian and Ukrainian gymnast. She holds 18 medals including 9 gold medals, not counting the ones won by the team she was coaching after she retired as an active athlete (the team won 3 gold medals). Before the London Olympics 2012, she was the most medaled Olympian ever, title she lost to Michael Phelps after those games.

Born in 1934, she first practiced ballet, but turned to gymnastics after her choreographer moved out! A good thing for her after all.

Michael Phelps is an American swimmer and the most medaled Olympian ever with 22 medals among which 18 are gold ones. He has also broken 39 world records. Unfortunately, he has announced his retirement and will not take part in competitions anymore: "I won't swim past the age of 30".

Useful links: the wikipedia page about him and the official website of the Michael Phelps Foundation.

(illustration: Michael Phelps shows off his Olympic gold medal as he stands on the victory podium with teammate Ryan Lochte, bronze medalist, and Hungary's Laszlo Cseh, silver medalist, at the National Aquatics Center in Beijing.)

Beneath the Surface: My Story
Here is an autobiographic book by the most medaled athlete in the world. Full of details and a great read.
Buy Now

Derek Redmond is a retired British athlete who held the British record for the 400m event and who won several gold medals in 4x400 relays. One of the most inspirational video from the Olympic games ever is the one where he finishes his run despite the intense pain caused by a torn hamstring.

Old articles from the news

If you are interested in reading more about what happened, I found these articles about this event which are particularly interesting.

Abebe Bikila was a two-time Olympic marathon champion from Ethiopia. He is especially known for his participation in the 1960 Olympics marathon where he ran the entire marathon barefoot (the photo is from the 1964 marathon where he did wear shoes). The sponsor did not have shoes that fit to his feet so he simply decided to run barefoot.

"I wanted the world to know that my country, Ethiopia, has always won with determination and heroism." Abebe Bikila, about running the marathon barefoot.

Nadia Elena Comaneci is one of the most famous gymnast, especially famous for being the first one to get the perfect score of 10. This was at the 1976 Olympics where she actually got 7 of those perfect scores. Daniela Silivas must be mentioned as well as she too got 7 perfect scores (this was in Seoul in 1988).

To learn more about her, check the book featured in the first paragraph about the

Dara Torres is a swimmer who has competed in 5 Olympics. The 2012 London Olympics would have been her 6th Olympics but unfortunately, she failed to qualify, finishing the qualification race 0.09s behind the second qualifier (only 2 are qualified to the Olympic games).

Even though some athletes have been to more Olympic games, such as Hubert Raudaschl, 9 times and 2 medals and Ian Millar, 10 times with the London Olympics and 1 medal), Dara Torres deserves her place in this list because of her success (12 medals including 4 gold) and because she is a proof that high-level athletes can also be mothers. She effectively gave birth to her child in 2006 and participated in the 2008 Summer Olympics. If this was not enough, Dara Torres is a now swimming for Swim Across America, a charitable organization that raises funds for cancer research.

Sometimes, it is not only the medal that counts but the way you got it. Have a look at how Kerri Strug performed in 1996 for her team despite being injured at her ankle. This girl deserved more than a gold medal.

No articles about the Olympics could be complete without naming Jesse Owens, or James Cleveland "Jesse" Owens. In the Berlin Olympics, he won 4 gold medals (100m, long jump, 200m and 4x100m). These gold medals meant actually a lot for the world at that time because it was an event that Nazi propaganda used to promote the "Aryan racial superiority". A black man winning 4 gold medals was exactly what was needed to disprove them. 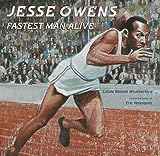 Jesse Owens: Young Record Breaker (Childhood of Famous Americans)
This one focus more on the childhood of Jesse Owens. Nice gift idea if you have a child who likes this athlete
Buy Now

Gregory Efthimios "Greg" Louganis is an American diver who showed an incredible courage in the 1988 Seoul Olympics. After hitting his head on the springboard during the preliminary rounds, he suffered concussion but did not give up and went up to the final where he won the gold medal. Being able to dive after such an accident shows how much athletes give to the Olympics and to their sport in general.

The video chosen in this article is not from the Olympics and is not "spectacular". It is simply beautiful. So simple and yet so beautiful. Sensitive readers are advised not to look for the video on youtube showing again and again Greg Louganis hitting his head on the springboard.

Also, when an athlete gets a medal in two different events, it is generally for events that are "compatible". For example, biathlon and cross country skiing, or swimming and water polo. Eddie Eagan managed it in boxing and... bobsled, a quite uncommon combination. Carl Schuhmann is another example, winning both gymnastic events and ... wrestling events. For the record, Carl Schuhmann also participated in athletics and weightliftings.

Among the athletes presented in this article, which do you find most inspiring?

Some did not make it to the list but were highly considered such as Lawrence Lemieux who broke away from a sailor racecourse to save lives or Bobby Pearce who stopped rowing to avoid injuring a family of ducks who strayed into his lane. Also very inspirational was the story of the first Jamaican bobsled team depicted in the Cool Runnings movie.

There are probably many achievements or athletes not mentioned in this article who deserved to be here. You are welcome to mention them by leaving a comment. -