After picking up the best shutdown cornerback in Darrelle Revis, the Tampa Bay Buccaneers were poised to make some noise in 2013. With the addition of wide receiver Vincent Jackson and safety Dashon Goldson, the team was equipped to score some points and improve on their 5-11 record in 2012.

After an opening day loss to the Jets on a last second penalty, the Bucs fell apart. The team started 0-8 to start the year and starting quarterback Josh Freeman was traded to Minnesota after three games into the season. Rookie quarterback Mike Glennon performed well, but was very inconsistent as the year went on. The team ended up finished with a 4-12 record, tied for last place in the NFC south, and the worst passing offense and total offense in the league. The team also ended the year with 16 players on injured reserve including stars like running back Doug Martin and wide receiver Mike Williams.

Defensive tackle Gerald McCoy and cornerback Darrelle Revis were the teams only pro bowlers. McCoy recorded nine sacks and was names the best defensive tackle in the NFL. Revis won the SN comeback player of the year while recording two interceptions and 11 defended passes.

After the firing of Greg Schiano, the Bucs were in the market for a new head coach. Their search for a coach brought them to Lovie Smith and hired Jason Licht as the team's new general manager.

Smith had previously the head coach of the Chicago Bears for nine seasons and leading them to a Super Bowl appearance in 2006. Smith also served as a defensive assistant for the Buccaneers under head coach Tony Dungy. His first act as coach was bringing in former Vikings head coach and Dungy disciple Leslie Frasier as the team's new defensive coordinator.

This past year, Buccaneers owner Malcolm Glazer passed away at age 82. He also owned the Premier League team Manchester United. With his death, Glazer's three sons gain control of the organization.

The Buccaneers had a lot of holes that needed to be filled in the draft. Rookies from last season like cornerback Johnthan Banks, defensive tackle Akeem Spence, and defensive end William Gholston have proven they can hold up to the intensity of the NFL game but both sides of the ball need improvement. Especially in positions like defensive end, offensive line, and wide receiver.

The Bucs need an edge rusher to complement Gerald McCoy in the middle. Whether that be Gholston or Adrian Claiborne, multiple pass rushers on the defensive line is what makes the the Tampa 2 defense special.

With Donald Penn now in Oakland, their needs to be a tackle to protect the quarterback's blind side. There isn't a pro bowl caliber tackle like Penn on the roster and is something they will have to address in the future.

Vincent Jackson is a playmaker at receiver, but the offense needs another wide out that can stretch the field and take away double teams on Jackson. The top wide receivers in this draft were Clemson's Sammy Watkins and Texas A&M's Mike Evans. Watkins was seen as the best break away receiver after the catch. Evans has the best hands in the draft and had the size and body to box out corners for a catch.

After the Bills picked Watkins with the 4th pick, the Bucs used the seventh overall pick to draft Evans. And in the second round, the team drafted Washington tight end Austin Seferian-Jenkins. With Jackson, Evans, and Seferian-Jenkins, the Bucs now have one of the tallest receiving corps in the NFL.

Lovie Smith has already said that Josh McCown will be the starting quarterback going into the season. McCown proved to be very efficient playing in Chicago for an injured Jay Cutler. This will be his 12th season in the league and Smith sees this as McCown's best opportunity for success. With three tall, lengthy receivers to throw to, he should have no problem retaining his job and keeping Mike Glennon on the sidelines. With Doug Martin coming back healthy from a shoulder injury, the offense should be well balanced.

With Lovie Smith's different style of coaching will definitely make an impact in Tampa Bay. Players will like to play for Smith and will want to win for him. In a season or two, Tampa can prove to be a competitor again in the NFC south.

Best record they can hope for- 7-9

How will the Bucs fair this season? 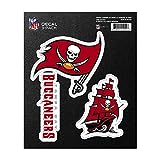