John Elway spent a lot to build a championship contender in Denver.

The offseason was dominated by numerous additions and departures following the start of the free agency period. Like the previous two seasons, the Broncos set numerous individual, league, and franchise records. Denver clinched their fourth consecutive AFC West division title, a first-round bye and the AFC's No. 2 seed, but lost in the Divisional round of the playoffs for the third time in four seasons.

Quarterback Peyton Manning made the Pro Bowl but struggled towards the end of the year. He threw 39 touchdown passes, but only four in the last four games of the regular season and the playoffs. In addition, Manning achieved only one 300 yard passing game within the team's last seven games. One day after the Broncos' 24-13 playoff loss to the Colts in the Divisional round, reports indicated that Manning had been playing with a strained quadriceps for the past month. Running back C.J. Anderson became the teams starting running back after injuries to Ronnie Hillman and Montee Ball. Anderson achieved 1,282 all purpose yards with most of it coming in the second half the year. Julius Thomas was bothered by an ankle injury and backup tight end Virgil Green was playing more snaps by the end of the year. Demaryius Thomas and Emmanuel Sanders were one of the best receiving duos in the league but Wes Welker had his worst season since 2006. The offensive line struggled with position changes and injuries for much of the year.

The defense was the focus of the 2013 offseason. DeMarcus Ware and Von Miller formed one of the best pass rushing tandems in the NFL as the pair managed 24 sacks. Linebackers Danny Trevathan and Nate Irving were injured late and it really hurt the defense. Cornerback Aquib Talib was named to the pro bowl but by most account, Chris Harris was a better cornerback. T.J Ward made the pro bowl but faded off late in the year.

The rookie class has potential at the top tier. Cornerback Bradley Roby settled in as the team's nickel corner and improved more throughout the year. Wide receiver Cody Latimer rarely saw the field but could have a more expanded role this year.

After finishing the year 12-4, head coach John Fox and the Broncos mutually agreed to part ways. Fox compiled a 49-22 record in four seasons, led the Broncos to four consecutive AFC West division titles, a first round bye in three consecutive seasons, as well as a berth in Super Bowl XLVIII, but lost in the Divisional round of the playoffs in three of his four seasons as head coach. Four days later, Fox was named the head coach of the Chicago Bears.

On May 28, left tackle Ryan Clady tore his ACL during OTA's. He was placed on injured reserve and will be out for the entire season.

Denver held the 28th pick going into the draft and had several positions that needed to be addressed. Primarily at tight end, offensive linemen, and safety.

Julius Thomas is now in Jacksonville and Jacob Tamme is in Atlanta. Denver needs a playmaker from the tight end position.

The shuffled offensive line helped the change to a run based offense, but Louis Vasquez is better suited back at right guard. The team needs a reliable right tackle.

Rahim Moore is now in Houston and the depth was stretched after Quinton Carter's knee injury. The Broncos needs a game changer to play beside T.J. Ward.

Denver decided to trade up five spots with Detroit to draft Missouri defensive end Shane Ray with the 23rd overall pick. Ray was the most explosive defensive end in the draft, but he has many off the field issues involving substance abuse, most notably being cited for possession of marijuana three days before the draft.

The Broncos also notably drafted Colorado State offensive tackle Ty Sambrailo in the second round and Ohio State tight end Jeff Heuerman in the third. Sambrailo has great quickness and lower body flexibility but his lack functional strength make him susceptible to being labeled as a bust. Heuerman was seen as the best blocking tight end in the draft but his overall production was limited.

During the team's OTAs, Jeff Heuerman tore his ACL and will be out for the entire season.

This might be Denver's last reasonable chance for a championship with Peyton Manning under center.

Manning is 39 and this could be his final NFL season. C.J. Anderson has to continue the success he had as a rookie and take pressure away from Manning. The offensive line should be more solid if Ty Sambrailo starts at right tackle. The receiver corps will be productive as long as they can stay healthy.

The defense needs to remain consistent throughout the whole year. The defenses production seemed to drop in December and in the playoffs so fixings that will be a big priority.

Denver still has enough talent to be the favorites in the AFC West but their age is a cause for concern in how far they can go in the postseason.

How will the Broncos fair this season? 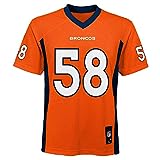