This past Memorial Weekend a close friend and I embarked on our first weekend backpacking trip. Both of us are avid hikers/campers and have a lot of outdoor experience but neither of us had taken the plunge and gone for a multiple day backpacking trip. Our former camping experiences were always reserved campsites that you were able to drive right up to, unpack, and relax. While these trips are convenient and fun, we wanted to get the real experience of “roughing” it in the backcountry.

We choose North Country in Allegany State Park because of travel convenience (the park is only 1.5 hours from Buffalo where we live) and our combined knowledge of the area. Since this was our first time hiking/camping without the safety net of a car and multiple other campers within a close proximity of us, we wanted to hike an area that we both knew well.

We set out on our trip around 6:30pm the Friday of Memorial weekend. The drive down to the park was ominous. The entire western portion of New York had heavy rain over the course of the last week and we encountered torrential rain for a good portion of our ride down there. Fortunately, we didn’t cave and turn the car around, because about 25 minutes out from the park the rain stopped and the sun began peaking out from the clouds. Arriving at the park a little after 8 o’clock we didn’t waste any time starting our initial hike. The sun was already beginning to go down and in the mountains it falls even faster. 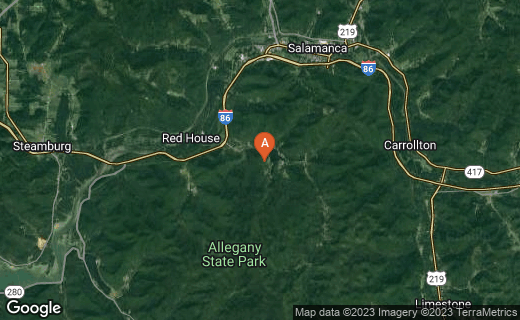 The amount of rain that had fallen in the past week was evident during that initial hike as my feet were soaked within the first 20 minutes of walking. The ground was mucky and this slowed our movement. After almost 80 minutes of walking we began to get worried. We should have arrived at the first lean-to on the trail that we planned to stay in, but hadn’t. We walked for another 20 minutes before deciding that it was best to find a clearing and make camp. We choose a spot that was right on the trail and had a natural barrier of fallen down trees and deadwood between our backs and the thicker brush. While my friend set up our tent on a flat spot, I began to start our fire.

With a little work I had gathered a good size bundle of small dead twigs and sticks. Everything around us was sopping wet but I created a small tower out of the wood in order to allow it to air dry faster, rather than leave it in the wet long grass. Luckily I had brought some synthetic tinder, which I shaved into smaller pieces with my knife and lit it with a lighter. (I carry a manual fire starter with me but given the fact that I was already dark and everything was already wet so I opted for the quicker modern approach) Starting a fire from scratch, especially in wet conditions, is all about patience. It took my friend and I about an hour but eventually through continued nursing and care we had a decent size fire. It is often easy to make the mistake of throwing a big piece of wood onto your budding fire before it is strong enough to handle it. The key is to dry the base of your fire and get it as hot as possible. This does not always constitute a rip roaring light creating fire but often is a very small smoldering one. Once the base is dry and hot enough almost any piece of wood will burn on it, no matter how wet it is. After we had a strong fire we ate a quick snack of trail mix and jerky before turning in for the night. 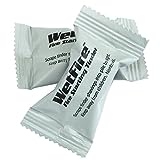 The next day we were able to get our fire started again quickly since the coals were still hot. We had each brought one steak and we cooked them up in tinfoil for breakfast. Sheets of tinfoil are very useful when camping/hiking. They are very lightweight and have multiple different uses. It can be used to cook with, signal for help, carry water, carry embers to your next camp location, made into a fishing lure, etc. You are only limited by the amount of tinfoil you have and your ability to mold it.

After eating our breakfast we broke camp and began the days hike. The sky had cleared and it was a bright sunny day. The sun had dried the area substantially compared to the previous night. This sped up our hiking as we were not trudging through mud can muck anymore. After about an hour of hiking, including a long, fairly steep, downhill portion that both of us felt in our knees with our heavy packs, we came to a park road. We had expected this but still checked our map to be sure we had gone the right way.

After confirming that we were in fact on the right path, we again set off. The only thing is that we were not on the right path. After only another 25 feet or so we found a trailhead sign. We had inadvertently missed our turn the night before and instead of turning onto the next section of North Country we had continued on trail 17. This turned out to be one of the hoarse trails that traverse the Park. Then and there we had to make a decision. We could either attempt to keep going on this route and hope to get picked up by a fellow park camper the next day when we had planned on leaving or we could turn around now and go straight back the way we came using the same campsite as we had the night before. It didn’t’ take long for us to decide that we would turn around instead of continuing. This was our first time out and neither of us wanted to become another statistic. The only hesitation came with the knowledge of having to hike back up the hill we had come down to get this far. 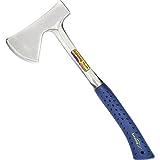 The hesitation we had was warranted because on our way back the hike up that hill was brutal. It took us 10 minutes to get down the hill but it must have taken at least a half hour to get back up it. By the time we had made it back up the hill to flat ground we were exhausted. It was a short distance from there back to the site we had made camp. Both of us still worn out from the hike up the hill we sat down and relaxed. The sun was high up in the sky at this point and we wanted to get some shade to give us a break from the heat. After our short break, some water and jerky we began collecting brush and limbs to make a lean-to. We had both brought hatchets and in a short period of time we had enough timber to make a decent size lean-to that we could both comfortably sit underneath.

The rest of the day consisted mostly of periodically going out to collect and chop more firewood. We wanted to keep the fire going to help keep the bugs away because at this point in the day hoarse flies were clouding the air and landing on us indiscriminately. The bug spray that we had brought only marginally helped. Luckily the flies were not biting, they were more of an annoyance buzzing in your ears and landing on you.

By nightfall the bugs began to subside and we had some peace. I had brought my IPod so we had some music to listen to by the fire. For dinner we each had one of the cans of soup that we had brought. While it is not a light food item by any means, a can of soup is easy to prepare. We just threw the cans right in the coals and within 10 minutes you had a hot can of soup to eat. Absolutely beat from a day of hiking and chopping wood we cleaned up or food items hung them in a tree some distance away from our tent and turned it for the night.

The next morning we work up late. We took our time taking down the camp as we had all day to make it back to our car. We had our last can of soup for breakfast and only drank enough water to wet our palates. There was still some hiking to do before we would reach our car and our water supplies were running low. About noon we set off and began the hike back to the car. The hike back was fortunately mostly downhill. The flies were out in force again and we tried to keep moving at a brisk pace so that they wouldn’t bother us as much. We took one break on the hike back and drank the last of our water. About an hour later we exited the woods and came to the road. A short walk down the road and we were back at our car. After driving around the park for a bit just to take in the scenery, and picking up and dropping off another fellow backpacker who needed to get back to his car, we left the park. We had failed to follow the exact trail that we had wanted to hike but we had a good time, had no trouble or injuries and got back to our car on time. All in all in was a pretty successful first outing and we both look forward to going on many more. This weekend in fact we will be going farther south to Virginia where we will be camping in Shenandoah National Park. 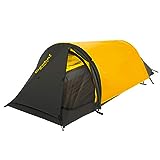