Rangers fans and Rangers supporters clubs can be found in most countries around the world and providing that you are a Rangers supporter you will be welcome to visit where ever you decide to go on your annual vacation.

Rangers supporters love their team and will travel anywhere to watch them play.

Whether playing at home or away the Rangers fans will always be there and their songs will be heard all over the stadium.

Win lose or draw you will hear the Faithful Rangers supporter chanting on the way to the game during the game and on the way home from the game. 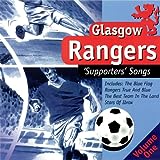 Is That who I think it is?

A lot of the old Rangers songs are now banned from being played or sang at the matches and if any supporter is caught singing any of these songs they will be removed from the grounds and they will receive a ban from going to future matches.

The songs which are banned have religious and sectarian conotations which can lead to violence between rival Football Supporters especially Rangers Biggest rivals Celtic.

it was even suggested that the song The Hokey Cokey should be banned because it had religious connotations.

According to the Catholic Church and some Scottish politicians, singing the popular tune that begins with the words "You put your right hand in, your right hand out," may constitute an act of religious hatred.

A spokesman for the leader of the church in Scotland said the song had disturbing origins.

Critics claim that Puritans composed the song in the 18th century in an attempt to mock the actions and language of priests leading the Latin mass.

Of course on the Saturday after that story was published Rangers Fans could not help themselves as they whole heartedly sang the Hokey Cokey at the tops of their voices.

The Sash My Father Wore, The Billy Boys, the famine song, F*** the Pope and many others

Rangers football Club do have a list of official songs that can be heard every match day whether playing at home or away from home these songs can be heard reverberating around the grounds, including the official Rangers Anthem "Follow Follow"

All the Bluebells are Blue

The Boys in Royal Blue

The Rangers over Here

It's Rangers for me

Rangers and Rangers Supporters have also adopted the song "Simply the Best" by Tina Turner as a favorite song and winning the Premier league this season has seen the song once again enter the UK music charts at number 9, The celtic supporters tried to counteract this by downloading and buying their anthem You'll Never walk alone which entered the charts at number 33.

There are many Rangers song that of course make fools of their opponents especially Celtic, the laughing Rangers fan is just one of the many.

Most of them contain bad language though so if you are easily offended please do not watch the videos in this section.

Aberdeen also come in for a lot of flack from Rangers fans and because they are from the north east of Scotland Sheep are often mentioned in these songs.

Again this Video contains language that may offend.

Because of religious conotations though most of these songs are also banned from the grounds and I am not allowed to show them here either.

Of course it isn't only Rangers fans that make up songs about rival teams every Scottish and British club have their own songs.

Lets all do the Bouncy

In Scottish football no song gets the Rangers fans going like The Bouncy Bouncy song when the Rangers fans start singing this song and bouncing up and down as they sing it you can feel the whole stadium moving.

The words are easy to learn and you cant help yourself from getting caught up in the moment when the Rangers Fans start to sing it.

The video (right) was filmed in 2008 when Rangers Travelled to Manchester to play in the EUFA Cup Final against Zenit ST Petersburgh, this was before the match and some of the fans decided to go to Aldi's Supermarket for a bit of Shopping.

Sadly Rangers did not win on the day.