Hunting Rifle or War Rifle? Hunting with the Swiss K-31

In many areas of the U.S. and more familiarly to me, the Midwest, hunting in thick stands of trees, tall grass, or thickets of brush is a common occurrence when hunting deer. Finding the perfect rifle, or brush gun, for hunting this kind of terrain can be a challenge. Walking for long distances, shooting at moving targets in areas of poor visibility, and commonly uneven and/or cluttered habitat means you need a rifle that is short barreled, clip or tube fed and allows for quick pointing. Sights need to be easily picked up and put on target, and it must be a caliber that is heavy enough to take medium sized game and possibly punch through some grass or tree limbs in your line-of-sight. Follow up shots are key, so in that case, lever action rifles have an edge of the bolt actions.

Many hunters turn to medium caliber rifles that are bolt or lever action. The Winchester 94 .30-30 is renowned for this purpose. This lever action meets all of the above criteria, along with being very reliable. Some hunters use semi-auto rifles like the Remington 7400, or pump action rifles, like the Remington 7600. However, the cost of semi-auto and pump action rifles is higher than that of bolt and lever actions, the latter more commonly seen.

When it comes right down to it, no deer hunters gun cabinet is complete without a good brush gun, but which one to choose? An overlooked, but very viable candidate is the Swiss K-31. Also known as the Schmidt-Rubin, these rifles were standard issue to the Swiss armed forces from 1933-1958, and they saw use up until the 70's. While they do have a longer barrel than most brush guns, they are not much longer than a Mossberg 464 lever action.

At an overall length of 43.5 inches, they are carbine rifles. They are chambered in the 7.5x55 Swiss cartridge which, while not as common as some hunting calibers, it is not hard to find and very comparable to the .308 Winchester cartridge in terms of ballistics. Military surplus ammunition is available to practice with, and soft and hollow point ammunition can be found loaded or in separate components to work up your ideal load. The K-31 has a uniquely Swiss bolt design. Instead of being a turn-bolt design, like almost all modern bolt action rifles, it is a straight-pull design. This allows for quicker reloading by eliminating unnecessary movements while rechambering a round (see pictures). They are fed by an external box magazine that holds 6 rounds. These clips were built to be able to reload while still locked into the rifle's action. While a little heavier than most lever action rifles, they are not unwieldy.

The Swiss design of these rifles means they were built well to be accurate and durable. Even today, you can find these rifles in very good condition at a price that is less than some of the cheaper modern hunting rifles cost. The Swiss believed that individual marksmanship was essential, and the design of the K-31 is no exception. A K-31 in good shape is very capable of 1 inch groups at 100 yards with the iron sights that it originally came with. This isn't just researched information mind you, this is what I've done in my own experience with the rifle as well. They are ruggedly built because they were built to see action in war and can be beat around and still maintain accuracy as well as integrity. Aftermarket companies have developed mounts to put optics on these rifles as well, should you choose.

Finding a K-31 carbine is not hard. Every gun show of any size will most likely have a few of these scattered around in varying grades from excellent to fair. Prices vary, with an example graded as fair, you may see prices as low as 250-30 and with the higher quality examples pushing 400, depending on the stock. The pictures are of a K-31 with a walnut stock. It's important to note that it is common to find these, at a cheaper price, with a beech wood stock. Before buying a K-31, just like any other firearm, you should read up on values and grades as well as any little tidbits to note such as the difference in stocks on this rifle. Never go into a deal without knowing what your getting and what it's worth.

The 7.5x55mm Swiss cartridge uses the same diameter bullet that the .308/7.62x51 NATO does. However, the 7.5x55 Swiss has a little more powder behind it, giving it slightly better, but still very comparable trajectories and ft/lbs. of energy to the .308 Winchester (7.62x51mm NATO). Because it uses the same diameter bullet that the .308 Winchester uses, reloaders of this cartridge will be able to use the wide array of bullet types that are available in the .308 diameter. Note that the bullet diameter is the same, however the cartridges themselves are not the same, never try to chamber ammunition that is not the correct caliber. This gives you better range and more power than the old brush gun stand-by caliber, the .30-30.

After a day of walking through thick brush, timber, and tall prairie grass, you want your shot to count. Trust me when I say that this rifle will not let you down when the buck of a lifetime runs through the thicket in front of you. Line up your short quickly with the K-31 carbine, and put the hammer down with the knockdown power of the 7.5x55mm Swiss. Happy hunting! 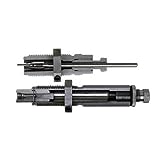