The History of Camden Park

West Virginia's only amusement park is found just off of US Highway 60 in Huntington, just south of the Ohio River. The park is not the biggest or the most exciting in America, but it does hearken back to a more innocent time in American history. Camden Park opens for the 2013 season on May 4.

The park actually began as a picnic area for the Camden Interstate Railway in 1903, which ran between Huntington and Ashland, Kentucky. According to the Camden Park website, "J. P. Boylin transformed Camden Park from a carousel at the end of a trolley line in Huntington, WV to an amusement park for families of all ages in 1950."

Some rides have come and gone over the years. The most notable case is the Thunderbolt Express, which was a coaster with two towers and a loop in between. Riders would ride down a hill into a loop and then up another hill. From the second tower, they would then ride the same course backward. This coaster began its career at Kings Island as the Screamin' Demon.

Video of a Ride on the Big Dipper

The park's signature ride is the Big Dipper. This roller coaster dates back to 1958, and is a classic figure-8 design that includes a tunnel. While the coaster only reaches a height of 50 feet, it nonetheless finds itself on the Coaster Classic list of the American Coaster enthusiasts.

The Big Dipper's little brother is the aptly named Lil' Dipper, which is also on the Coaster Classics list. The Lil' Dipper reaches a height of 17 feet and runs over 450 feet of track. This classic coaster began operating in 1961 as an alternative for kids too young or too scared to rid the Big Dipper.

These coasters are award winners for ACE because they are two of the three remaining coasters in operation that National Amusement Devices built during the twentieth century.

Camden Park also includes a classic haunted house, a log flume, and a ride called the Whip that whips riders around an oval. William F. Mangels of Coney Island built this classic ride

Camden Park also includes several other attractions that make it a fun day, especially for smaller children. Kiddie Land includes a handful of rides for youngsters that will keep them occupied.

Additionally, the park boasts classic rides such as the Scrambler, Dodge 'Ems, and a Carousel. A new West Virginia-themed mini-golf course opened in 2008. There is also a train that can entertain people of most ages. Park goers will have the option of eating their own lunch at the park's picnic area or buying it at one of the park's vendors.

Admission to the park is $20.99, which pretty much keeps up with inflation on the $6.00 ride all day hand stamp that I remember from my youth. Children and seniors can get into the park for $14.99. Back in the 1980s, I remember admission costing less than $1. Patrons had the option of the all-day hand stamp or buying tickets for individual rides. Whether you have a family with small kids or you're looking to relive a little bit of youth, Camden Park can definitely provide a nostalgic day. 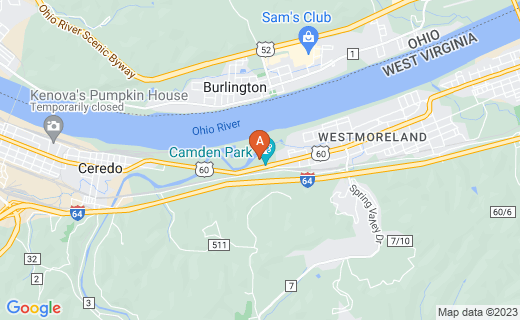