World Cup competitions have become the most lucrative venues for sports apparel to introduce/promote their latest products and designs. The football players have practically become fashion vehicles to promote Nike, Adidas, Puma, Kappa or another large clothing line manufacturer. Even though there have been so many changes to the football uniforms through the years, there have been certain shirts that will always remain in the history of football. I call these football shirts "iconic". To reach an "iconic" status a shirt cannot be simply a shirt, it has to carry a remarkable story with it. You will find that in this article there are several shirts that you've never heard of or even seen, however they all fall into the category of "iconic" for one reason or another.

This is one of the shirts with the most history behind it. The German team that wore this Adidas shirt in the 1990 World Cup, won the competition, and cemented the Germans as a football powerhouse. The Bundes Team of 1990 was arguably one of the best teams to ever play in a World Cup. With stars like Matthaeus, Voeller, Brehme, and Klinsmann the German team beat Argentina (with Maradona) in the 1990 World Cup Final. Brehme scored a penalty with 5 minutes left on the clock, and threw then West Germany in jubilation. Without a doubt this football shirt classifies as one of the most "iconic" of all time (and the team that wore it, carries an "iconic" status as well).

The 1998 French national team wore one of the most legendary Adidas football shirts of all time. As you may remember France won the World Cup with a remarkable 3:0 win against the star studded Brazilian football team (led by Romario, Ronaldo, Cafu and bunch of other stars). The French team was obviously not bad either, they had players like Zidane, Barthez, Marcel Desailly, Lizarazu, Trezeguet and many more.
The Adidas design of the 1998 French football shirt is simply stunning. It represents the "golden era" of football shirts, designed mainly by Adidas for World Cup teams. With a design like this, and accolades to match the already stunning jersey the France 1998 football shirt is one of the greatest football memorabilia items of all time.

If there is any talk about football/soccer, we cannot miss to mention Brazil. Even when we talk about football shirts, Brazil still has something remarkable to offer. Their 1994 World Cup jerseys were not considered fancy at the time, however looking at the 1994 shirt almost 20 years later we can conclude that this UMBRO football shirt was a masterpiece. A masterpiece designed for the masters of the worlds most popular game: Brazil.
Just as every football shirt in this article, the Brazilian 1994 World Cup shirt was worn by champions. When I say champions I truly mean champions, with players like Romario, Bebeto, Dunga, Leonardo, Cafu, Ronaldo (even though he did not play much), Rai, Taffarel and a lot more talented players. Brazil wont he 1994 World Cup by beating the powerful Italian squad in penalties (remember the missed penalty by Baggio? Of course you do!).
This UMBRO football shirt has cemented itself in the history of football shirts, as it was worn by some of the best football players of all time. 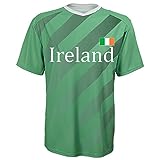 One of my all time favorite classic football shirts comes from UMBRO once again. It is the England national football team shirt which was worn during the 1998 World Cup in France. I have to say that UMBRO did another phenomenal job on a football shirt in the 90`s, however this time the client was the English national team.
I cannot begin to describe to you how many classic moments I have witnessed when England was playing with this amazing football shirt. I have to say that my favorite moment was during the Argentina-England game when David Beckham got sent off. I will always remember this moment, not just because David Beckham used to me my favorite player (and still is), its because it sparked one of the greatest football games ever played in World Cup.
This classic football shirt did not see a trophy, however it still remains one of the best football shirts of all time.