A Draw for Locals and Visitors Alike

Just waiting to be explored, a vast network of caves awaits back country enthusiasts above the shores of Kootenay Lake.

Cody Caves is considered one of the best-known cave systems in British Columbia. Tucked away in the Selkirk Mountains above Ainsworth Hot Springs on the west side of Kootenay Lake, the caverns are part of Cody Caves Provincial Park, which bears the distinction of being the first subterranean park in B.C.

The caves were likely known of and possibly explored by aboriginal inhabitants who made yearly migrations to the area to hunt and fish and who visited the nearby hot springs pool, but they were named after Henry Cody, a prospector who came to the West Kootenays in the 1890s looking to strike it rich. Cody likely saw the mineral formations in various places where waters waters bubbled to the surface. And while exploring the mountain slopes above the Ainsworth area, Cody discovered the caves.

The area was already known as a hot spot, where geothermally heated water rose to the surface and formed natural pools and cascaded in small streams down the mountainside. With hot springs and caves in close proximity, word spread and curiosity about the caverns grew, attracting locals and people from far away. Earl Grey, Governor General of Canada, was one of the early visitors to the site in 1908.

Further exploration uncovered 800 meters of explorable passages winding through a vast network of underground chambers and caverns and by 1966, the area was established as the first subterranean park in British Columbia.

How the Caves Formed

Cody Caves started forming millions of years ago. The continent called Pangea broke up and formed our continents. This phenomenon manifested in this corner in British Columbia when limestone beds that had formed 600 million years ago were thrust up as mountains formed. Water containing carbon dioxide met up with the limestone, producing carbonic acid. Over the centuries, the limestone dissolved, contributing to the formation of subterranean tunnels, caverns and galleries hidden deep within the mountainside above Kootenay Lake. The action of water and erosion continues today; and an underground stream flows through the cave system.

Approximately 800 meters of explorable passages wind their way through the caves, marked by impressive calcite formations that have been growing about one cubic centimeter per century. Formations include stalagmites and stalactites, soda straws and waterfalls/draperies/bacon strips, flowstone and rimstone dams (gours), and some of the best boxwork specimens in the world.

The Best of the Best

Ancient calcite formations and a network of limestone tunnels make Cody Caves one the best caving sites in the B.C. back country.

Have you ever gone caving?

In a short story written by Roger Pocock for Argosy magazine, Cody Caves were described as having inner chambers walled with gold ore. In an area already frequented by prospectors and miners, the caves only grew in popularity.

The caves are located 2 miles north of Ainsworth Hot Springs on the west side of Kootenay Lake.

Getting to Cody Caves

Future generations will benefit from the measures taken to protect the integrity of the caves.

The formations are very fragile and easily compromised.

Efforts have been initiated to protect the integrity of the cave system for future generations. Cody Caves is now gated and exploration is only possible by means of guided tours, which reduce impact to the caves' interior.

Further efforts have seen implementation of preventative measures against the spread of Bats White Nose Syndrome. Cavers are instructed against using caving gear from areas east of the Rockies and/or how to decontaminate clothing and equipment that have been used in environments such as caves and mines that would be considered high risk.

Courses such as Managing Karst Through Best Practices seek to educate and raise awareness of fragility of natural systems.

Going into Cody Caves is not for the Faint of Heart

Cavers face damp and sometimes cramped conditions, slippery surfaces and sharp formations, but for many, the experience is well-worth the effort.

Protective Head-Gear is a Must When Exploring the Caves

Adventurous Caver Gets Down and Dirty in Cody Caves

The Kootenay Kidnapper, a children's novel by author Eric Wilson, includes Cody Caves as part of the setting.

Join Cavers on an Adventure Underground

Cody Caves is located just off of Highway 31. Three kilometers north of Ainsworth, a narrow access road that's passable in summer months and marked with directional arrows climbs to the parking area. Expect a 20-minute drive up the mountainside to get to the parking area. Cavers must suit up, wear waterproof footwear and don protective head gear with lights. A hike up a forested trail leads to the cave entrance, at about 2400 feet elevation.

The cave opening is protected by a metal fence. This keeps bears and other large creatures from entering and being unexpectedly encountered inside the caves.

Getting to Cody Caves 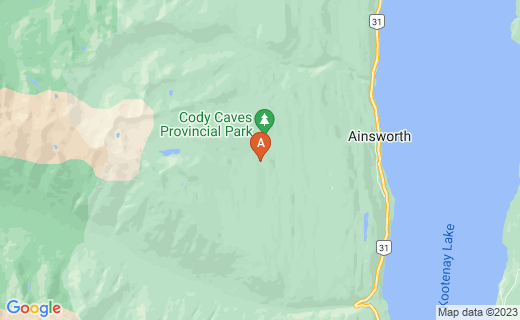 The boxwork formations found in Cody Caves are considered to be among the best in the world, protruding upwards to an impressive 20.3 cm.

Adventure in a Underground World

Today, thousands of visitors come to experience the caves. The world is left behind as cavers descend into the depths. The air is cool and damp. And it would be very dark without lights. One will crawl and even have to squeeze their body through tight openings (not for the faint of heart or the claustrophobic) and have to navigate through narrow passages and scramble down steep drops to reach the open chambers and caverns filled with calcite and layered sedimentary rock formations, boasting a multitude of soda straws, stalagmites, stalactites, draperies and boxwork formations. The explorable area is over 1.5 kilometers and there is even an underground waterfall with incredibly pristine water. With all that awaits those hardy enough to venture underground, it's no wonder the caves have become so well-known. Recent discoveries suggest that much may be still undiscovered.

Cody Caves is a network of limestone tunnels and chambers thought to be some of the biggest subterranean caverns in Canada. Geothermal forces have contributed to a karst environment that has evolved through the centuries and continues to shape the area today, one of great scientific interest and appreciated by adventure lovers.

Have You Explored Cody Caves?