Demolition Derby Is A Big Hit With All Who See It

There are some drivers who become aggravated with other vehicles on the road. They may wonder what it would be like to legally crash their car into the other driver's vehicle. This is not only possible but also a good way to make money. It's called the “Demolition Derby.” It is estimated that every year over 70,000 drivers participate in one or more of the hundreds of demolition derbies that take place all over the United States. Winnings can range from a thousand dollars to tens of thousands of dollars.

The desire to watch objects crash into one another has been going on since the 1800s. This was a time when people took great pleasure in watching two unmanned obsolete train locomotives crash into one another. It was event that people willingly paid their hard-earned money to watch. The actual beginning of the demolition derby as we know it is disputed. Some believe it was started during the 1930s when Ford Model T's were intentionally crashed for spectators. Some say it started in the 1940s at the Carrell Speedway, and others say it began during the 1950s at Islip Speedway in New York. The 1950s is when demolition derbies gained their popularity. They were held at race tracks, fairs and speedways around the country. The fascination with this sport has grown steadily over the years. Its championship was broadcast on the Wide World of Sports television program for over twenty years. During 2006, demolition drivers had to qualify to participate in NAPA Crash for Cash. Since then, the sport has been a favorite event with cable television watchers and spectators who go to watch it live.

A demolition derby will have rules based on the type, and class of vehicle that can participate. In most cases, drivers will have to be 16 years old or older. During the competition, a driver has to wear a helmet and seat belt. The event can begin as the vehicles are circling an oval shaped track. A driver may be required to hit a vehicle every 90 seconds or more. When this isn't done, it's called sandbagging and disqualifies a driver. If a driver hits a vehicle in the driver's side door, or intentionally causes it to roll, this is also grounds for disqualification. A driver can also be disqualified if their vehicle starts spilling gas. The last vehicle running wins the competition.

There is more than one sanctioning body for demolition derby. The Demolition Derby League (DDL) is one of the most popular organizations for the sport. They work with thousands of events and promoters every year to organize participation in demolition derbies. The DDL is an all volunteer organization. They promote the sport's participants at all levels.

Many experienced demolition drivers recommend using General Motors products for competition. A driver should also get the largest vehicle possible that is permitted in their chosen competition. Having leaf springs in the back is a help. The size of the engine is not really important. Speed is not as much of an issue as endurance.

Preparing a vehicle for participation in a demolition derby requires more than removing the windows. Doors must be reinforced. Some drivers have their vehicle equipped with all-season tires with at least 35 percent or more of its tread. The vehicle's stock gas tank must be removed. A marine style tank should be placed where the back seat was removed. There are many other modifications that must be made before a vehicle is ready to participate in a demolition derby.

A good strategy is to try and avoid taking huge hits. Drivers try to not be in a position where others can have a good run at them. If possible, drivers should make their vehicle go around the oval track in a counter-clockwise direction. This will make the driver's side door face inside the track. When getting hit, a driver should move the passenger side door area to take the impact. The biggest thing is for a driver to keep in motion. A driver must know how to always protect the weakest parts of their vehicle.

It is common for a demolition derby in the United Kingdom and the United States to feature a rollover competition. The goal is to drive a car in a way that its wheels on one side directly hit a ramp. Doing this causes the vehicle to roll over a number of times. Drivers will continue to drive at the ramp and roll their vehicle until the vehicle no longer works. The driver who finishes the most rollovers before their vehicle stops working is the winner. The favorite vehicle for this competition are compact cars and hatchbacks. They seem to work the best. Having less weight makes it possible for them to roll many times easier than a bigger vehicle. The current participants in rollover competitions have lately been using sedans and coupes with modern high-horsepower common in salvage lots. The reason is that some champions in larger rollover competitions have won using mid-size and full-size sedans.

There is a common type of demolition derby competition that takes place on a track that is shaped like a figure 8. Bump to Pass or figure 8 racing competitions are very popular. Vehicles race on the figure 8 track, and the chances of a collision where the track intersects are increased. The vehicles keep going on the figure 8 track until one vehicle can no longer be driven. This type of race is done with standard demolition derby vehicles as well as school buses and other types of large vehicles. The track the most popular with this type of competition is Riverhead Raceway located in Riverhead, New York. 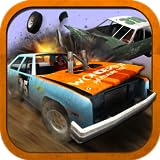