Vibram, the company that makes the five finger shoes, and has been making soles for hundreds of other boots and shoes since 1937, got into the disc golf disc making business a few years ago, and are making a line of discs that are revolutionary in the material they use. They started with putters, then a mid range, and then their first driver,

They made another mid range and have been focusing on the drivers since then. They have made 2 more Lace drivers since the first Lace, one overstable, the O-lace, for the bigger throwers, and now one a bit more understable for the beginner and average player, the Unlace.

What Vibram says about the Unlace

Introducing the newest member to our distance driver family, the unLace. It is our understable compliment to the Lace. What's the best thing about the unLace? For starters, it’s great for starters. It doesn't require big arm speed to perform. Whether you're stepping up to distance drivers, or a pro looking for a finesse driver with tons of glide – the unLace is a fun, fast distance driver!

This disc is not just for beginners. One of the things I have found over the years is that it’s pretty easy to find a decent driver out there you can use for regular shots that have the natural fade at the end. Harder to find are the other drivers you need to go with that is one. You need a driver that you can throw with very little fade, hard and flat, and it will go straight and drop down at the end of the flight. The other driver you need, and the hardest to find is a long distance driver that will turn the opposite way and stay on that line while still giving a long controlled flight.

I got the Unlace to try out and review. I live in Minnesota and I do play in the winter, but it’s hard to do a good review on a disc when it’s really cold or you're playing in snow where footing is not the best. I thought I was going to have to wait a while to give it a good test.

Fortunately I got a perfect day for a review it was sunny with no wind and close to 50 with no snow on the ground. Some friends and I went out to play a round. What I found playing was, as you would guess, you can’t throw it flat with a lot of snap without it turning over hard. I would expect exactly that from an understable driver. If you snap it hard, it turns over almost immediately and becomes a roller. 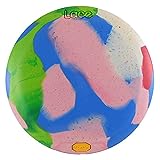 If your not a new player

What I found that I really liked is that you can throw it with a hyzer flip or a straight flat drive with less snap, and get a very nice s curve flight with a ton of glide. The disc is very controllable and I think as Vibram says, it will work good for newbies as well as veterans as long as you throw it the way it needs to be thrown.

If you are a new player

If you are starting out, or have not been playing very long, or you just don’t have a strong throw, you are going to like this disc. You can throw it flat and get it to do what you want it to do, and you can also throw it longer than you can other discs. One of the biggest problems with newer players is they want to advance fast, and they go to the big fast discs so they can get the longer distances and improve their game. What they soon learn is that the hate the fast discs because they can’t throw them very far, and they die with a hard fade way before you think they should.

If you throw a disc like a Nuke OS, or an O-Lace, you are going to have a bad experience. These discs are not made for you. They are made for the strongest and the best. A good analogy would be. If you tried to use the same set of irons in ball golf that Tiger Woods uses, you would be able to hit the ball, but you would have a terrible round. Hybrid and cavity back irons used in making golf clubs, are used to make the average golfer make better contact and be more consistent. The Unlace and then the regular Lace are made for you, and they are just as fast.

The other thing I found with the Unlace is that it will hold a gentle anhyzer flight for a long time. I am left handed, and there is one hole that I play regularly that I need to make a 250 foot gentle turn to the left. It’s a hard throw to get right with most discs when you're a lefty, same as it would making a gentle turn to the right if you're right handed, The Unlace is perfect for that throw.

The Vibram line of Lace drivers are all in my bag now. The Unlace fills a slot that I have been using an old Roadrunner for, for a long time. I used that Roadrunner for one shot on one hole. The roadrunner is out and the Unlace is in because it is much more versatile and I will use it for many more shots.

If you’re newer player that is having trouble finding a long driver that you can control, try this disc, and if you are a more experienced player who wants a great medium long flat driver or a great long range anhyzer driver, or a disc you can hyzer flip and get it to fly forever,you need this disc.