HuntnFish has spent many years on the water fishing and has caught nearly every species of fish in Washington State.

Sorry to throw the most cliche' fishing pun in the books at you so soon, but given the topic, I couldn't resist. Depending on the store you go to, there is a striking number of different hook manufacturers, sizes, types, colors, and materials to choose from. While many choices in the fishing world are subject to personal preference, hook selection is one choice that should follow some general guidelines, and for good reason. If a hook is too large, a fish can't get it in its mouth. If its too small, it might be swallowed, making releasing a fish safely very difficult. Additionally, in some areas, certain hooks are illegal, and can land you a nasty fine (that's two fishing puns if you're keeping track.)

Anatomy of a Fishing Hook

Some Vocabulary and Nomenclature

Where the line is usually affixed to the line. With some knots, the line only passes through the eye, and the line is tied to the hook shank.

The portion of the hook that come after the eye, but before the bend of the hook. Traditionally, the shank was straight, and still is in many hook design, however it is not always the case. The thickness of the shank helps determine how tough the hook will be, and how large of a fish the hook can stand up to without bending or breaking.

The portion of the hook that curves back up, forming the hook shape. The hook will sometimes bend along multiple axis (imagine a hook that doesn't lie perfectly flat on a counter top.) The bend can assist with hook sets, however a poorly engineered bend can lead to the hook breaking at high stress points. Generally, look for hooks with a smooth bend rather than a series of angled bends.

The sharp part of the hook. This is one of the most important parts of the hook. A dull hook point will result in more lost fish than you can imagine, so buy quality hooks, and replace them as necessary. A resharpened hook will never be as good as a new one, but it may get you through the rest of the day. Dull hooks lose fish.

The gap of a hook refers to the space between the shank or bend and the hook.

Near the point of most fishing hooks, there is a another small backwards facing point. This is the barb of the hook. The bard passes easily through the fish's mouth in one direction, but prevents the hook from sliding out in the opposite direction. Barbed hooks typically land more fish than barbless hooks.

This refers to a hook with no barb. Hooks can either be purchased as barbless, or barbs of a traditional hook can be pinched down. Barbless hooks make catch and release fishing much easier on you and the fish, since they are significantly easier to remove from the fishes mouth. As a result, you will likely lose more fish while fighting them. In some many areas, barbless hooks are a regulation requirement, so watch out.

You typically won't see the temper of the hook explicitly called out on the packaging. The temper of the hook refers to how the hook metal was heat treated during manufacturing. Hard temper hooks tend to start and stay sharper, but are more likely to break of overloaded. Softer tempers will lose their point faster, but are less likely to break. One way to check the temper of a hook is to try and pinch the barb of one of the hooks in the package (after purchasing them of course). With a softer temper, the barb should smoothly pinch down. With harder tempers, the barb will often snap off when pinching.

Do you use barbless hooks when not required?

This is one of the most common fishing hooks you will run into. It is characterized by a straight thin shank, a relatively simple J bend, bent eye, and a hook barb. Often these hooks also have baitholder barbs, to hold the bait in place. These hooks are designed for the job their name implies, to hold bait. Generally, due to the long shank, these hooks are used for larger, more natural baits: grubs, crickets, worms, etc. Keep in mind, if using these hooks in an area where barbless hooks are required, not only must the hook barb be pinched, the baitholder barbs must be pinched as well.

Egg hooks are one of the smaller types of standard fishing hooks. They are characterized by a bent eye, a thin continuously curved shank and bend, and a standard barb. As the name suggests, they were designed for small baits, such as salmon eggs, which can easily hide most, if not all of the hook. They are the standard hook for baits such as salmon eggs, dough style baits, and synthetic eggs.

This is a bit of an oddity as far as hooks go. In fact, its not a hook, but rather three hooks bent and welded together. The premise is that by having more hooks, your chance of converting strikes will be higher, and it seems to do just that. These types of hooks are more often used on lures than with bait, as their high profile makes them harder to conceal than single hooks. Be aware that like barbed hooks, treble hooks are also sometimes disallowed in certain water. In this case, one option is to cut two of the hooks off of the treble, however this may throw off the balance of the lure, so its better to cut off the entire hook, and replace it with a single hook.

An octopus hook is simply the big brother of the egg hook. They have the same bent eye, short shank with continuously bend, but with a slightly thicker wire shank. They are a bait hook designed for larger baits such as leeches, fish, cut baits, squid, clams, etc. Sizes are available in a wide range, so match it to the bait size you will be using.

Circle hooks are another oddity in the hook world. On circles hooks, the hook point makes an aggressive bend and points back towards the shank of the hook. The purpose of the circle hook is to avoid gut hooking fish, and will nearly always hook fish in the lip. To look at the hook, its hard to believe it would ever hook a fish, but don't worry, it will. These hooks are most often used for catch and release fishing, when a barbless hooks are not desired. Examples include much big game blue water fishing like shark, marlin, sailfish, tarpon, and related species. 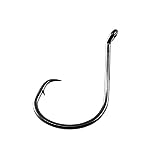 Gamakatsu Octopus Circle Hook
Gamakatsu is perhaps the most trusted fishing hook manufacturer. Their hooks are consistently needle sharp while still being tough enough to take a beating.
Buy Now

Worm hooks are a common bass hook. They are designed for synthetic plastic worms, not natural worms. The hook has two nearly right angle bends near the ear, giving the hook a very wide gap. The rather odd shape is due to the common weedless rig they are used for most often. This rig will allow the worm to be fished in a natural manner, pulled through heavy cover without snagging, while having strong hook sets still possible.

Siwash hooks were designed for a singular purpose: lures. They are one of the only hooks that will not have a bent eye. The eye is instead in plane with the straight shank of the hook. This allows the hook to trail naturally behind the lure, rather than at a funny angle as it might if a bent eye hook was used. When switching a new hook to a lure, always use a siwash hook. Many times, siwash hooks with come with an open eye. This allows the hook to be slipped over the back of a lure and pinched closed, without the need for an extra split ring

Aberdeen hooks are another style of bait hook. They are characterized by their very thin wire shank, which is designed to keep live bait healthy and free to move about on the hook. The rather small gap allows smaller fish to be targeted, such as perch, crappie, bluegill, and other pan fish. Due to the small diameter of the hook wire, strong fish can possible bend or break the hooks, so save these for the little guys.

Color, Size, and Knots, and Brands

Color: Hooks are available in a wide range of colors, with the most common being nickel, red, black, gold, and bronze. In general, I stick to nickel hooks with lures and trolled bait presentations, and darker colored hooks for still bait presentations. Truthfully, there are only a few instances when a certain color of hook has been proven to provide an advantage (red or pink hooks for Sockeye to name one.)

Size: When choosing the size of the hook, it mostly comes down to matching the hook size to the bait size. Too large of a hook and the bait will not be presented in a natural manner. Too small of a hook and you will hook less fish, as well as having an increased chance to have the fish swallow the hook, making a safe release very difficult.

Knots: Often, the right knot will depend on the technique of fishing you will be using, however I'll make a few suggestions anyway. For any bent eye hook, a Snell Knot is usually ideal. This knot is tied to the shank of the hook rather than the eye. This knot style is stronger and allows the hook to sit properly on the line. Snell knots can be hard to tie though, especially on small hooks, so until you have this knot down, default to other knots. Some of the better knots for attaching hooks are the Improved Clinch Knot, the Uni Knot, and the Palomar Knot.

With attaching a new treble hook to a lure, you will need to use a split ring. Make sure the split ring is large enough so that that hook can move freely on the lure without binding. If the hook binds, it will not always trail naturally behind the hook, and allow a hooked fish to gain leverage and break free.

Brand: Generally I leave brand up to the discretion of the buyer, however the hook is one of the most important pieces of tackle between you and the fish. Cheap hooks will dull faster, bend and break easier, and in general lead to an unpleasant fishing experience. Some well respected hook brands include: Gamakatsu, Owner, Vision, Mustad, VMC, and Daiichi. Eagle Claw makes a solid product as well, but generally I leave them for smaller fish.

These are very general suggestions. Depending on fishing technique, bait or lure types, target species, and hook type, you may have to size up or down slightly.