Thelma is a Filipina Expat living in Germany. She shares her Philippines life and travel experiences about her beautiful home country.

The Beauty of Gihaw-an River The Girl at Gihaw-an River

Once upon a time, there lived a little skinny girl in the nearby Gihaw-an River. She was so shy and so alone for she had no friends. She was so sickly that she was often absent from her elementary school classes. Her only playmates were her two younger sisters, Vil and Jing. She was called Titing by her close relatives who lived near the riverbank of Gihaw-an.

Titing spent her time reading and listening to the radio when she was not at school or playing with her sisters. As she was the oldest child, she had to behaved well and be always a good example to the younger ones. When her parents were not at home, she was responsible of everything and took care of her siblings. Her mother taught her how to cook rice at the age of nine. One of the few light works that she could manage, for she was a delicate child. Her parents were always scared that Titing got sick for it did always cost money that they did not have.

Saturdays were the busiest days of the month. Every Saturday, the women who were living at the nearby river woke up early at 5 a.m.to prepare the things for their washing " picnic" in Gihaw-an. Besides the dirty clothes that they collected for the whole week, they had to bring food to eat with them for they just took their lunch on the riverbank. They brought with them cooked rice, fish cooked in vinegar, dried fish, all packed into the banana leaves. The banana leaves were first heated over the open fire to make it soft and flexible for wrapping the food in. Water from the pump was served as a drink and if they had money, Coke was bought from the market.

Titing and her family were not the only one washing the clothes in the river. There were lots of mothers with their daughters doing the same. After washing their clothes, they dried them on the green grasses or used the clothes lines of Nang Lucia, the tenant of the land on the riverbank.

While waiting for the clothes to dry, the children were jumping from the coconut tree into the river and then swimming back and forth. Some of them were collecting oysters which were growing on the fallen coconut tree under the water or they catched small fishes with sharpen bamboo sticks or with their bare hands. The small fishes, mostly anchovies,were roasted on an open fire that they made. The harvested oysters were spiced with salt and eaten raw. Very delicious! It was then always loud for Nang Lucia that they were scolded by her. Sometimes she joined the activities, when she was in a good mood.

Titing´s mother was enjoying her lunch time with the other mothers. It´s the time where the women talked about their lives. How hard it was to budget the earnings of their husbands! They talked about their ideas in life, about their children, everything that was going on, especially the gossip in town.

Everything has an end so has the washing day. Around 3 or 4 p.m. the cleaned clothes were filed in their respected washing basket ready to be iron for the next day. Everybody was tired but happy as the day was filled not only with work but with laughter and joy. They went home with the baskets full of cleaned clothes carried on their heads. Some mothers had one hand holding their basket, some just walked straight with their hands on their sides. Titing and the rest of the children were following their mothers.

The day was not over yet. When they arrived home, they still had a lot of things to do. Like collecting water from the pump, bringing firewoods into the kitchen for cooking. Maybe some had to go to the market to buy some food to cook for supper. Titings´ mother was lucky when her husband came home with pansit (fried noodle) bought from the restaurant.

There were and there are still Nipa plants in the creek of Gihaw-an. I called it Gihaw-an creek for I don´t know until now if it has it´s own name. Since it is located in the land of Nang Lucia near Gihaw-an river. Gihaw-an creek is just behind the old house where I grew up. It has a narrow bridge in going to Nang Lucia`s land. When the tide was high, the water went up to my parents ground. There were loads of nipa in this creek for when one was harvested, another one grew.

The leaves of the nipa are used for the roofing of a typical Pilipino house. They are scraped from the branch, folded them into a bamboo sticks where almost 1/2 of the leaf should be on the front side. Then it is sewed with a long flexible bamboo thread. One roof contains around 20 to 30 pieces of nipa "fingers". It depends how long the bamboo stick is. Hundreds of nipa roofs are needed for a nipa roofed house. It also depends how big the nipa hut is.

How To Make Nipa Roof

The End of My Childhood River ???

In the middle of 1980`s, when I visited my hometown for a holiday, I did not forget to visit my childhood river and the inhabitants nearby. I was shocked for it was no longer the river that I knew. The river was getting wider and dirtier than before. Lots of coconuts were cut off due to the building of a new bridge that would connect the barrios of Sacol and Mahayahay to the town of Buenavista. It was a big progress for the people who lived there for when I was a child they used to crossed the river by boat. It was good for most of them especially in time of typhoons. No longer cut off from the civilization.

Yes, the Gihaw-an river that I knew existed only in my mind. The happy days that I spent there with my siblings and cousins who after our strolling around, treat us to a picnic with "lamao" ( scraped young coconuts with it´s delicious juice). God bless my cousin Oyong who is now in heaven!!!

The above photo is a typical Philippine house made of woods and nipa roofs. The women were chatting about everydays life while making the nipa roofs. The children were listening to them while looking how the women did their job.

Do you have your own childhood river? 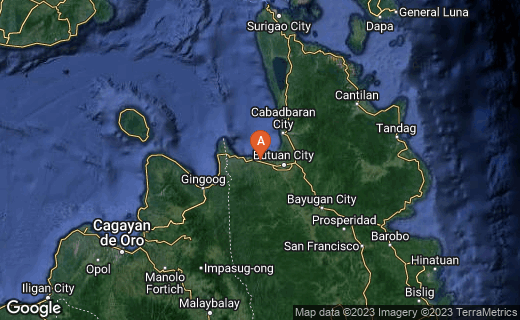