The Pleasure Beach entrance in the early days

The Pleasure Beach is one of East Anglia's largest attractions spread over 9 acres of land on South Beach Parade in Great Yarmouth. Today it is a mixture of modern and more traditional rides and attractions, suitable for all the family. But when people visit the fun fair, I wonder how many of them consider the historical element of this seaside resort? Dating back to 1909, it has over 100 years of history, and even has a Grade II listed ride there!

In 1909 C. B. Cochran was granted a lease for an amusement centre. That first amusement park had a scenic railway and not much else. Up until 1914 it did attract large amounts of people until it had to close for the war. The park re-opened in 1919 and by 1923 the Pleasure Beach was growing. That first scenic railway came to the end of its lease in 1929 and a water chute was build in its place. The water chute is no longer there now too. In 1932 the scenic railway which still stands today was built and is still enjoyed by thousands of tourists each year to this day. Pat Collins took over the running of the Pleasure Beach in 1928.

Jimmy Jones married Jane Botton, the daughter of Albert and Lottie Botton. And after the death of Albert, Jimmy took over as Managing Director in 1975. Over the coming years the fun fair expanded and new rides were being added all the time. In 1993, Jimmy's son, Albert Jones took over the role of Managing Director and is still in charge of the park today with his family. The Pleasure Beach has seen new and exciting rides over the years taking it into the 21st century. But with old rides still in use, like the Roller Coaster and Gallopers, it still has that traditional feel to it. In 1996 The Pleasure Beach Gardens was added to the expansion of the park at the north side of the fun fair.

The roller coaster as it is today.

In 1929 Pat Collins, who owned the Pleasure Beach at the time, visited Paris and went to the Colonial Exhibition. The Scenic Railway was designed by German Herr Erich Heidrich. Pat bought the ride and shipped the parts back to the UK. Once construction had completed, it opened to the public in April 1932. It is about 46 ft in length and 100 ft in width. The highest point is 70 ft above ground level. Just as a fun fat, part of the 1982 song House of Fun video by Madness is shot on this ride.

One of the more modern rides on the park.

With the Pleasure Beach having over 100 years of history to its name, and being in the same family for over 60 years, I like the fact there are a lot of old, traditional rides along with new rides. This might be a place to go to for fun and excitement, but I love that there's so much history to it with the roller coaster and Gallopers especially. There are other rides on the park which are old too, like the Fun House and Dodgems. Although these rides and attractions are old, they are still so popular. People still get enjoyment from them when they visit Great Yarmouth on holiday.

Having worked at the Pleasure Beach for about 7 years, I found it a fun and exciting job. Although only seasonal work, it is fun and the fact that every day is different makes it more enjoyable. I love how it's steeped in history and how it is blended in with modern day rides and technology. 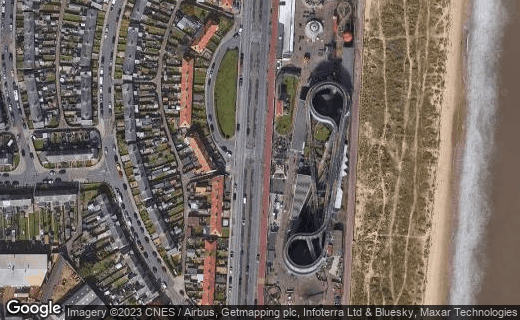