How Discreet is The CRKT Williams Tactical Key

Mamerto Adan is an engineer by profession, but a writer by night. He loves toys and knives, and has a martial arts background.

I live in a place where it’s hard to get a gun. I mean you need to go through a lot of stuffs just to get a license, and more hassle for a permit to carry. It’s time consuming and cost a lot. The total price for the paper works could exceed the cost of the whole darn pistol you wished to get. If your life is in danger, you will be dead by the time your papers are finished.

Gun laws sucks, but anything else are okay in our place. Good thing though that blade laws are not as restrictive as in London. When a uniformed guy caught you with your Benchmade, you could get away by simply giving a good excuse why you have one. You won’t be going to jail, and knife confiscation is the worst that could happen (most of the time.) But just pray that Mr. Policeman won’t show interest to your posh knife.

And when it comes to lethal gadgets, the law is more laxed. You won’t need any shenanigans to carry a pepper sprays, kubatons or tactical pens. No stupid “offensive weapon” nonsense to worry. Though be careful carrying a retractable batons or nunchakus (why would someone would even carry a nunchaku, unless he is a blackbelt).

As you can see, it is still okay to be armed at some point. But not all the time, we are allow to carry. In some establishments, blades must go. But when faced with a situation like this, CRKT has something to offer.

Meet the CRKT Williams Tactical Key. Designed by a defense expert, it was claimed to be an effective defense tool, but discreet all the same. On the outside, it looks like a car key. So, people won’t give a darn if you openly carry one.

It’s nice to have one when laws are becoming restrictive. But to be sure, I will be risking the angst of armed security, by openly carrying it into establishments where weapons are not allowed.

But Why Even Bother

Aside from verifying the claims that it’s a discreet weapon, I saw several Amazon reviews claiming that the thing is more imposing that what the manufacturer claims. One noted that it’s large for a key, hence will alert the sharp eyes of the security. But I felt that these people are simply overreacting or need better things to do.

It is larger than house keys, but compared side by side with car keys, it is roughly the same size. The overall construction of the CRKT Tactical Key also made it resemble an everyday car key in one glimpse. But who knows if we really got sharp eyed security and police that will see through the disguise?

Hence, this test will verify, or debunk the Amazon geniuses once and for all.

The test is nothing scientific. I will bring this defensive gadget to places where weapons are not welcomed; In the office and a heavily guarded mall. To those of you wondering, I won’t bring this to the airport. Coming from experiences anything thin and metallic could alert the senses of the security there. So, I won’t bother. Now, the test will be:

Before that, it Could Bust You Open

The thing looks small when viewed in my laptop. But up close it’s quite large. About the same size as a Cold Steel push dagger and built like one. Though made to look like a key, it’s handled like a push dagger. You hold it, so the screwdriver tip will protrude between your fingers.

My preferred grip is letting the screwdriver tip stick out between the index and middle finger, being more comfortable.

And unlike most gimmicky defense device, it could badly hurt you.

Take note that it is basically a screwdriver, and we all know we could poke flesh with one. Hence when you aim at the face, cuts are the least of the worries. My friends reckoned that the curved surface of the human skull (the face), means that it could slide into your eye. You could blind someone with a quick jab. And if hits you in the soft spots, like the throat, you are on your way to the emergency room.

As for training, any martial arts could apply. But boxing (or any kickboxing style) works best.

Time to bring the Tactical Key outside, and we will start in the office. I first clipped my Tactical Key to my keychain. The great thing about this is that it made it more discreet. It blends well with the keys and bottle openers. And by the way, for security reasons I won’t be showing my keys in the picture.

After the Opinel incident, I always conceal my blades. But for the sake of the test, I laid my Tactical Key on the desk.

And to my amazement, no one gave a darn.

For three days no one took notice of a potentially damaging weapon on the table. I unclipped my Tactical Key from my keychain, laid it on the table so it will be more visible. I even fidgeted with the thing, and still no reaction. Then during a laboratory activity, I pulled it out just to test the screwdriver tip.

Well, the screwdriver worked, but it won’t get into tight corners thanks to the push dagger design. Even better, everyone praised my “fancy screwdriver.” No one panicked as they saw it as a tool, not a weapon.

Hence it passed with flying colors!

Again, to prevent robbery, or any forms of active shooting, we got armed guards and detectors around the mall entrance. We could say that we got heavily guarded mall in the area. I already lost my knife one time after it got confiscated. But will they take notice of my Tactical Key?

I brought my Tactical Key in the mall, first clipped in the key-chain then unclipped. And to my delight the guards never took notice even though my Tactical Key is fully visible (hanging on my pants with my other keys). Even if kept unclipped the guards fully ignored it.

Looks like the Amazon “geniuses” are wrong. The CRKT Williams Tactical Key passed the detection test. No one got cranky when I fidgeted the thing and play with it. It’s just a fancy screwdriver, according to them. The armed mall guards also agree.

Hence if you want a discreet, but effective defense tool, I could recommend the CRKT Williams Tactical Key.

Want to Get One 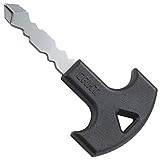