Andrew first saw Liverpool play in 1974 and has followed the Reds ever since. A keen football fan, he writes on all aspects of the game.

Jurgen Klopp is already a legend at Liverpool Football Club. In just five short years he has turned the club into European and World Champions, and now, in 2020 as I write, looks set to lift the EPL title, despite the intervention of coronavirus.

If the Reds are crowned champions it'll be their first ever Premier league title, a long and challenging thirty years since they last topped the English league. Along the way all kinds of records have been broken.

Klopp has assembled one of the strongest squads ever seen at L4, strength in depth enabling them to produce win after win, especially at home, the rebuilt fortress Anfield.

More impressively, the team has developed a way of winning which has delighted and baffled critics and fans alike. Like most great teams they have developed the knack of winning when not playing at their best.

This is the secret to success, but really it is no secret at all because what Klopp has done is instil supreme standards of hard work and efficiency.

He has gathered expert coaching staff around him and with a mix of nous and loving man-management, galvanised them into a solid machine.

Basically the team plays open, expansive football, mixing the short and long game. So you'll see long raking passes from defence aimed at one of the front three, and, fast short one-twos through midfield and into the opponent's penalty box.

Their front three of Firmino, Mane and Salah have shown exceptional understanding and technical skill, often combining hard sprints with clever passes, runs into danger areas and finishing of the highest standard.

When they're on song, at home and away, they can quickly destroy defences, as they showed against teams like Porto, Manchester City and Roma in the knock-out stages of the Champions league.

Klopp's squad now knows all about gangerpressing, a style of football where groups of players chase down the ball, each one stepping up the pressure when a team mate is beaten. Eventually, you win the ball back and strike hard on the counter.

It's a simple philosophy but difficult to keep up for 90 minutes. It needs the whole team to buy into the principle. His successful Borussia Dortmund side were acknowledged masters of this style.

Jurgen Klopp is a man for all seasons. An amicable man, full of warm wit, mischief and hard rock, he is sometimes prone to outbursts of manic delight. Equally he can pull weird elastic faces, the twisted llama tooth, the manic gerbil, when angry or frustrated, and you immediately think, this man is nuts, completely whacko.

But deep down he's a man who inspires confidence and honesty because he is so open, spontaneous and yes, hugely disciplined. He cajoles, he teaches - he can push hard when he needs to - but he prefers to see the best in what a player has to offer and work on that potential.

Just look what he's done with his front three. They are all better players for having Klopp as coach. Mo Salah especially has benefitted from Klopp's fundamental belief in working hard collectively to get the ball then cutting through opposition defences with speed and accuracy.

Mo Salah's great form has been a revelation. He's scored 44 goals and could get more if the CL final goes Liverpool's way. He's won a pile of awards in Britain and Europe and could be on to win the Ballon d'Or.

Jurgen Klopp has all the man-management skills needed to succeed at Liverpool. He has passion and drive. The fans adore him. The owners drool over him. His team is one of the best in Europe and one of the most entertaining in world football.

All he needs now is a trophy, or three, and his legendary status will be guaranteed.

Liverpool lost narrowly to Manchester City on penalties at Wembley in this cup final, the first opportunity of the season to win silverware. Jurgen Klopp will be pleased he got to a major final in his first season at Anfield but he knows his squad is a work in progress - it's not yet up to Klopp's high standards.

Steven Gerrard epitomises the classic Liverpool FC player. Locally born and raised, brought up to play hard and fast and remain loyal, he graced the Anfield arena for fifteen years, many of those as captain.

To watch him in his prime was to witness a hard tackling midfielder, brave as they come, a general striding forward with the ball, looking for that through pass, moving on toward goal, releasing a powerful right foot screamer that would hit the back of the net and set Anfield rocking.

His long passing was a dream. From the edge of his own 18 yard box diagonally 50 yards out to the waiting winger or overlapping full back. A master.

So, although now no longer playing for LFC, Steven Gerrard may not be able to fulfill his wish of gaining an EPL champions medal - not for want of trying - but he'll go down in Reds history as one of, if not the, greatest player to have pulled on the famous Liverbird shirt.

A.C. Milan 3 goals up at half time and already celebrating their Champion's League victory. Liverpool outplayed and second best. What chance of a comeback? None. Everton fans back home on Merseyside were dancing in the streets. This was going to be the most humiliating moment in Liverpool FC's history. The Milanese were going to thrash them, 4 maybe 5 goals to nil!!

Enter the gladiator Steven Gerrard. The greatest comeback ever seen in a major final was about to happen. In a mind blowing six minute spell in the second half Liverpool scored three goals to tie the match. At the end of extra time - with Shevchenko denied by the miraculous double save of Dudek - there was only ever going to be one winner on penalties.

Liverpool FC. Champions of Europe for the 5th time.

The young Columbian volunteer approached me one day and asked if I could take him to see a football match in Leeverpool. Matteo had come to work in the UK for a year and wanted to experience what he called the real 'English old fashioned' atmosphere inside the stadium. He was in his own words 'soccer mad' and he made Liverpool his first choice out of all the English premier league clubs. I agreed. How could I refuse a teenage Columbian who had shown such good taste in his choice? I did correct him though. We don't call it soccer in England I told him. Soccer is an imported word from the USA or Australia or wherever. (Assoc. + er). It's football, pure and simple. He seemed to get the message.

I told him about my passion for Liverpool Football Club. I took him to a 17th century pub, bought him a pint of Theakston's Peculiar - dark thick tasting beer - and gave him a potted history of the Reds, warts and all. Most importantly I emphasised Liverpool's rivalry with the deadly enemies from just down the road - the Unmentionables - the team from Manchester. Matteo understood. He said that in south America there were similar situations with certain clubs and certain countries. It was a natural thing. Yes I agreed, quite natural. But impossible to rationalise. You follow your team 100%, and you stay loyal to the point of blindness. It affects males, females, others in-between. Following a club can become an addiction, no doubt. 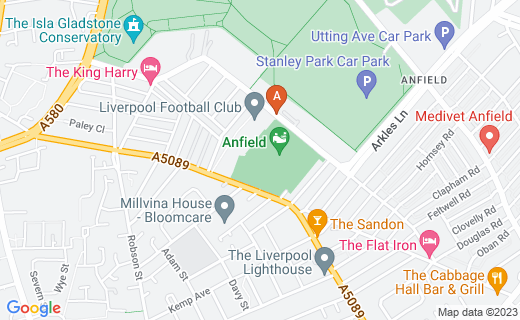 So we went to the match Matteo and I. We drove the 90 miles across the high hills of Yorkshire - the Pennines - on England's highest motorway right into the city of Liverpool. You follow the sign for the Football Stadia (plural note because there is a second team in Liverpool - no not Liverpool Reserves - but a team who play in blue and are known as the Toffees for their ability to make people's jaws stick together, rigid) and head straight for the district known as L4, Anfield. To the left is the route into the centre proper, to the Beatles museum and Albert Docks.

Matteo was a little surprised when I parked up for free within a stone's throw of the famous stadium. I guess I was used to the idea of driving up close and intimate to Anfield, slotting into a gap opposite the huddled rows of red brick terraces. It really is how it should be for me - a stadium of the people grounded in the very living space of those same people. The stands tower above the rooftops and the back yards are squeezed right up to the perimeter walls. On match days the local streets are as you can imagine packed with noisy, excited supporters, 45,000 of them! You have be very tolerant if you live close to Anfield. Better to be a Reds supporter.

I treated Matteo to a Scouse Pie with chips. He had to have authentic Liverpudlian food on his first visit. With a little salt and pepper and brown sauce he was as happy as any Columbian could be. After that fine meal we headed for the Hillsborough shrine. Matteo had heard of this very special place and had longed to see it. Set at the Anfield Road end of the stadium near the Shankly Gates there are the names of the 96 victims of the Hillsborough disaster and a flame that burns constantly to remind us all of their lost innocence. It is part of the emotional fabric of the club and moves an awful lot of people. Soon we hope to have some sort of closure for the families who have fought for a rightful justice.

By the time we got seated the teams were out and the stadium rocking. A semi final against one of the wealthiest clubs on earth, Manchester City, in the Carling Cup. We were 1-0 up from the first match but were not favourites to get to the final. Matteo held up his scarf as the first notes to You'll Never Walk Alone hit the speakers. The Kop began to sing as one the most famous song in world football. Then the whole ground erupted. Is there a better choir 40,000 strong at any football stadium? Matteo didn't know the words but he felt their meaning. From young child to old man this song stirs the blood like no other. If you enjoy singing and ridiculously large choirs then I urge you, at some stage in your life, to experience Anfield on a match day sitting on the Kop.

The song must have worked its magic because we won the tie and got through to the Wembley final. With a bit of luck and alot of graft we lifted the Carling Cup in the end and although it's not the most prestigious piece of silverware going it's not to be sniffed at. To risk a cliche, trophies is trophies at the end of the day.

Matteo got a fabulous baptism that night and was as hoarse as a sore throated goat the following day. What impressed him most was the intensity and the passion. When Craig Bellamy the veteran Welshman jinked into the box and played a one-two with Glen Johnson before slotting home left footed we turned into wild things, grabbing each other and dancing up and down with several grown men, in an ecstatic bunch. This is the glory we long for when we go to watch football. It stays in the blood.