Major League Baseball Legend Jim Abbott: The Man Who Pitched A No-hitter With One Hand

It was 1993 and the place was Yankee Stadium. A pitcher from New York took the mound and faced the Cleveland Indians. By the ninth inning, the Indians had not gotten a hit all game. It was the top of the ninth, and the Yankees had a 4-0 lead. With two outs, Indians all-star player Carlos Baerga came to the plate. He was the only person who stood between Jim Abbott and his no-hit game. The count went to two balls and one strike. Abbott wound up and delivered a perfect fastball pitch. It traveled right down the middle of the plate. Baerga swung and hit a ground ball to Yankees shortstop Randy Velarde. He threw it to fellow Yankee Don Mattingly on first base. This was the final out of the game. It wasn't the first no-hitter ever pitched in Yankee stadium. It was the first one in baseball history pitched by a man who only had one hand.

He was born James Anthony Abbott on September 19, 1967. He was born without a right hand. Abbott grew up in the East Village area of Flint, Michigan and graduated from Flint Central High School. At a young age, he was a fan of baseball and the Detroit Tigers. Throwing things came naturally to him. His little league coach felt he had the talent to be a pitcher. Abbott's natural athletic ability was noticed early. He was the quarterback for his high school football team. Abbott and led them to a state semi-final game for the Michigan State championships.

When Jim Abbot was ready to pitch, he would put the baseball glove on the end of his right arm. After throwing the ball, he'd immediately put his hand into his baseball glove. This made it possible for him to field any balls hit near the mount. When he fielded a ball, he would put the baseball glove with the ball between his right arm and torso. He'd then take his hand out of the glove and throw the ball to the first baseman. Abbot could throw out a runner on first and even start a double play. When teams would attempt to bunt to him, abbot could easily field the ball and throw a runner out at first.

Abbot was part of Team USA for the 1987 Pan American Games. The games were played in Indianapolis, Indiana. The team came in second place. After these games, he was awarded the US Baseball Federation's Golden Spikes Award. This is given to the best amateur baseball player in the United States. Baseball was a demonstration sport during the 1988 summer Olympics. Abbott pitched the gold medal game for Team USA. It resulted in a 5-3 victory over Japan. This was the first Olympic gold medal ever won for baseball by the United States.

Jim Abbott did not spend a single day playing in the minor leagues. He went from playing for the University of Michigan to pitching for the California Angels. Abbot was part of their starting pitching rotation during the 1989 baseball season. Doing this was considered by some to be motivated by a desire for publicity. Abbot was the only pitcher with just one hand in the major leagues. He proved critics wrong. During his rookie season with the Angels, he won 12 games and had an ERA of 3.92. He came in fifth in the American League Rookie of the Year Award voting. Two years later Abbott was considered one of the best young left-handed pitchers in the major leagues. During that year, he won 18 games and had an ERA of 2.89. He came in third for the American League Cy Young Award. In 1992, Abbott posted an ERA of 2.77 and won the Tony Conigliaro Award. This award is give to the Major League Baseball player who has overcome obstacles and adversity by the displaying spirit, determination and courage.

Jim Abbott began playing for the New York Yankees during the 1993 baseball season. On September 4, 1993, Abbott pitched a no-hitter against the Cleveland Indians. The lineup Abbott faced had some of the best hitters during the 1990s. Manny Ramirez, Albert Belle, Jim Thome just to name a few. The crowd of over 27,000 Yankees fans were cheering loudly for him. The incredible win was Abbott's tenth of the season. During the game, Yankee teammates left Abbott alone. They silently had a countdown to his milestone. When it was over, Jim Abbott had made baseball history.

Jim Abbott was traded to the Chicago White Sox in 1995. He then returned to play for the California Angels in 1996. This was a time of struggling for him. Abbott had a season record of 2-18 and a 7.48 ERA. He took the next year off from baseball. In 1998, he played again for the Chicago White Sox. Abbott pitched five games and won all of them. He then played for the Milwaukee Brewers, but his performance was poor. Jim Abbott officially retired from professional baseball in 1999. At the end of his career, Abbott had a won-loss record of 87-108 and a career ERA of 4.25.

Today, Jim Abbott is a motivational speaker. He is also a regular guest pitching instructor during spring training for the Los Angeles Angels. Abbott also works with the Department of Labor's Office of Disability Employment. His job is to encourage companies to employ individuals with disabilities. 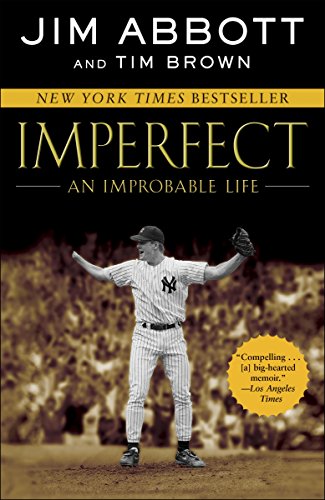