This past August my family and I embarked upon an adventure. My three sons play football at their local high school. As well, my younger son plays rep summer football. It seems we have football all year be it playing or watching our favorite NFL teams. Each of my sons has his own favorite team. My youngest son is an avid Giants fan which brings me to the crux of my story.

We decided this year would be the one in which we made the trek to see one of our favourite teams play live. For us, living in Southern Ontario, even New York is a rather long journey. We decided to pair seeing the Giants play at their home stadium with a first time visit to New York City. The 8 hour journey by car was well worth the adventure that awaited us. Seeing Time's Square, roaming Central Park and touring the Museum of Natural History was second of course to watching our first live NFL game and meeting my young son's favorite players from the New York Giants!.

StubHub is a great, safe site to buy tickets for sporting events, concerts and theater tickets

Using StubHub, I was able to get some decent seats for a preseason game at the Met Life Stadium on August 24, 2013. This sight is used by many season ticket holders to sell seats on dates they will not be using. I was able to get 4 seats together which was a little difficult. I would book much sooner in advance in future years but job interviews this year required our booking more at the last minute. 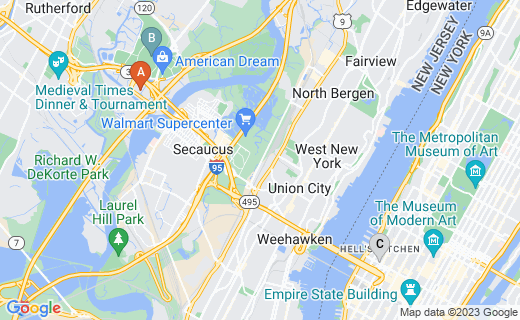 Would you have the nerve to ask your favorite football player for his autograph?

Booking Our Hotels For Our Football Adventure

Using Hotels.com, I perused hotels in the Manhattan area of New York as well as in East Rutherford, New Jersey, the home of the Giant’s home stadium Met Life. We managed to book a room for one night in Manhattan – The Travel Inn. I highly recommend this hotel for a stay in NYC. The rooms are spacious, comfortable and the parking is free if you are driving. It was a mere 10 minute walk to the Times Square district of Manhattan! But our trip to the city is for another story.

A View From The Our Room At The Sheraton Meadowlands Hotel

I also managed, for under $120 per night, to book a three night stay at the Sheraton-Meadowlands Hotel and Conference Center. Through Hotels.com my deal also provided an upgrade to the Club Sheraton program which includes continental breakfast and what they call Hors d'oeuvre. This evening snack sufficed as dinner even for two hungry boys as there were hot and cold selections! The rooms in this hotel are large; the beds were queen-sized and extremely comfortable. The indoor pool was very warm and inviting after a day of walking the streets of NYC. This hotel is located across the highway from the Met Life Stadium. From our window our view of the stadium was blocked by another building but we had a great view of the Brooklyn Bridge and NYC skyline!

My Son's Are Stunned To Meet New York Giants Players!

We arrived at this hotel on a Friday afternoon the day before the Giant’s scheduled preseason game. We checked into our rooms and swam in the pool. In the early evening my boys went down to the lobby. There is a Starbucks here with computer terminals with internet access. I am so glad we decided NOT to pay for WiFi service in our rooms or our stay may have turned out very differently. As the boys were logging onto their Facebook and Twitter accounts to talk with friends, they noticed a gentleman enter the hotel from the side entrance adjacent to these computer terminals. My son recognized the man as Tom Coughlin, the NewYork Giants head coach. Following close behind Tom was Eli Manning. My youngest son nearly fell off his chair. Kieran happened to be wearing one of his Giant’s Jerseys and got a, “Hi son” and pat on the back from Mr. Coughlin. Eli Manning also spoke briefly with him. When Victor Cruz walked in and saw Kieran wearing his number 80 jersey he gave him a cool nod as walked on by. The boys were not prepared for this at all. They didn’t think at this point to as the players to sign the jerseys they were wearing. They managed to get it together at some point to grab some paper and get one signature that evening - Henry Hynoski.

Autographs From The New York Giants After a day of outlet shopping the next day, we attended the preseason game. Although this hotel does provide shuttle service to the Met Life Stadium, a parking pass came with our tickets so we opted to drive and park at the Stadium. It did give us some insight into the tremendous pre-party activity that occurs at the stadium. The tailgate parties were a sight for my boys to see! It was a blast for the boys. Although the Giants did not win, Eli Manning played the first half, giving Kieran a chance to see his favorite player on the field. The game went into overtime which prolonged their first NFL game experience! Kieran thought he might meet some players again that evening so he bought himself an autograph ready football. A huge red and blue giant foam finger also accompanied us home that evening. When we returned to the hotel later that evening, the boys again staked themselves out by the same computer terminals. Fortunately, the players again returned to the hotel and again came through the same side door. This time Kieran and Jarod were ready for them. With marker and football in hand, they managed to procure a number of signatures that evening although they were not to see Eli Manning again this trip. The next evening, players were again to be found in the lobby and in total, Kieran received 11 autographs from his beloved Giants players. Staff at this hotel state that, 90% of the time, the Giants players stay in this hotel for home games. If you want to enjoy a NY Giant’s home game at the Met Life Stadium with the added bonus of potentially meeting many of your favorite players then I highly recommend booking into the Sheraton Meadowlands Hotel and Conference Center. With comfortable room, great New Jersey outlet shopping within a 20 minute drive for those so inclined and a great chance to meet a Giant’s player, it is the Giant’s fan dream hotel.