Milwaukee Brewers Baseball: Memories of the Braves and More

I spent my early childhood in Wisconsin and another four years when my husband's job took him there. It is a beautiful and scenic state!

Writing about the Milwaukee Brewers baseball team, my mind goes way back to childhood memories. Why is that? The very first professional baseball game that my family enjoyed seeing was in Milwaukee, Wisconsin, at the stadium that my grandfather (along with others) had been instrumental in bringing to the city. Of course, back then, the first professional baseball team that played there was not the Brewers but the Milwaukee Braves.

Take Me Out to the Ballgame

I have some old yellowed newspaper clippings from the Milwaukee Sentinel newspaper. One of them is dated 1953. My grandfather was given an achievement award from the Milwaukee Board of Realtors. It was for "outstanding service to his profession and community." It was an annual award given to just one recipient.

My grandfather had been a past president of the Milwaukee Board of Realtors. He was also a director for many years. Among other accolades, it mentions his being "a member of the Milwaukee board's budget and finance committee and was chairman of the board's taxation, city planning, and property owner's committees.

It also goes on to say in print that he "...was a strong supporter of the county stadium and expressway program."

Among other things, bringing the stadium to Milwaukee, which then attracted the Braves baseball team, was just one of my grandfather's many notable accomplishments. The year 1957, when the Braves won the World Series, was so exciting!

Singing the song "Take Me Out to the Ball Game" was a ritual as our family of five drove in from Oconomowoc to Milwaukee each time to watch Hank Aaron and others perform their magic on the field.

Take me out to the ball game song

The Milwaukee Brewers started playing in the American League in Seattle, Washington. The year was 1969, and they were called the Seattle Pilots. There is a large airplane building business in Seattle, thus the appropriate name. But their tenure there only lasted one year due to being underfinanced and not having a decent place to play, among other considerations.

In 1997 the Milwaukee Brewers (another appropriately named team due to the large beer industry in Milwaukee) moved from the American League to the National League.

Other Central Division teams are the following:

The East and West Divisions each have five-member teams making a total of 16 teams that play in the National League.

Which of these Central Division of the National League baseball teams is your favorite?

The Houston Astros moved to the American League West in 2013, effectively making each team have an equal number of members. So for those Astro fans who voted in the poll above, I am sure their allegiance is still with the Astros despite the league change.

A brand new stadium called Miller Park (notice the beer name?) opened in 2001. It has a retractable roof seating 41,900 people and has standing room for even more than that number.

The old Milwaukee County Stadium seated 10,000 more people, but obviously, the new stadium has updated offerings for its fans because of its newness. 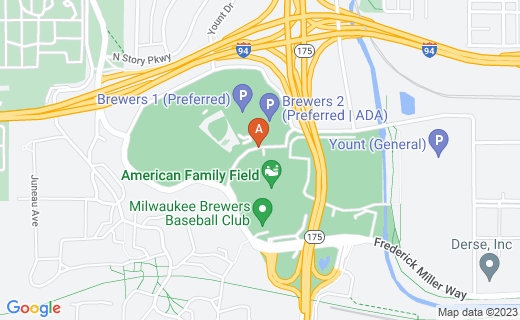 Where the Milwaukee Brewers play their games.

These baseball players have all played for the Milwaukee Brewers. They are also in the Hall of Fame.

These are the notables to date:

Hank Aaron was a favorite of ours when we first saw the Milwaukee Braves playing their games at the County Stadium in the 1950s. Hank Aaron was the first person to shatter the home run record of the famous Babe Ruth!

The Milwaukee Brewers fans are treated to some fun before the bottom of the 6th inning with five mascots dressed as various sausages. They conduct a race, with one becoming victorious each time. Beer and sausage, who says these Milwaukee fans can't have a bit of fun at their baseball games! Ha-ha!

Bernie Brewer is their other mascot who cheers on winning Brewer baseball moves by taking a ride down a slide built into the stadium.