My Ganzo Multitool, After One Year of Use

Mamerto Adan is an engineer by profession, but a writer by night. He loves toys and knives, and has a martial arts background.

Just lately, I got myself a Leatherman Sidekick as my new EDC multitool. As soon as I got it out of the box, I understood why the brand is revered among preppers. The Sidekick is considered as an entry level multitool. A budget multitool for first time EDC people, or people wanting their first multitool. Since this one is labeled as budget, I expected substandard materials, loose parts and cheap workmanship. I was wrong. Despite being labeled as budget, it screams quality beyond expectation. This is a real bang for the buck, a solid EDC toy that won’t let you down. I could say that because I owned a way cheaper multitool before. The Leatherman Sidekick is not my first multitool. I bought it to put my older multitool to retirement.

It was a year before, and I am in the process of building a basic EDC kit. Knives are the first to come. Then came the time when I thought I need a multitool. It could come in handy when I hike, and I need a tool at work, where the company rarely issue stuffs like screw drivers. Having a multitool is an advantage both outdoors, and in my career as an engineer. Leatherman came to my mind, then Gerber. Having no budget for both, a brand came to my attention, which made a name in the budget blade community. Ganzo.

And I Chose Ganzo

The Chinese brand Ganzo was becoming well known in the knife and EDC community. Their knives are the ultimate beater blades. Sharp, strong and cheap! You got more of a knife in less price. My friends are delighted to own such a budget blade, though I have a bit of reservations towards the brand. The fact that they are clones of well-known brands made me think twice of buying it. Though without question, they are indeed good blades for the price, and I was delighted when Ganzo started releasing their own knife designs. I mean I will pick Ganzos everyday over Mtech and sometimes Smith and Wesson folders (I like their fixed blades, OTF and batons, but S&W folders sucks).

And as I searched the online shops for cheaper Leatherman alternatives, I was delighted to learn that Ganzo has their own multitool lineup. Now if they can produce great knives, maybe they got good multitools as well. Even better, the designs are not rip-offs of well-known brands. The overall external appearance is relatively original.

But just to be sure I checked the internet for reviews. There are positive feedbacks on the multitools, yet the reviews were scarce. Nevertheless, with budget on the low side, I bought the Ganzo multitool as I don’t have much of a choice.

Ganzo has several multitool models to choose from. As what my budget and needs dictate, I got the G201-H model. It came in a lovely plain cardboard box, and it got a sheath with a generic bit driver set to match. And by the way, I love how they included the bit kit with the tool. I use screw drivers all the time, and different sized bits could come in handy. The hard sheath was also a plus to me.

Now out of the box, we got a full-sized shiny multitool with a seemingly solid build. It has good ergonomics, with the slanting profile fitting well in my hand. This model of the Ganzo has no locking tools, even the knife. That’s not much of a concern as I already owned a lot of working pocketknives if I ever needed a locking blade. Overall, this Ganzo model got the following tool:

The pliers are spring loaded, though why did they put it outside where it could get snagged?

How I Used It

I’m an urban guy, with an occasional trip to the mountains when we hike. In the office, owning your own tools is an advantage, especially if our boss made us disassemble air conditioning units. Hence, I need a tool that could take on light to medium tasks (as tearing down an air conditioner don’t require heavy torque or specialized tools). And when we need to pull heavy staples or nail, pliers could come in handy.

Overall, I won’t be subjecting my tool to heavy tortures. We got full sized tools for that, and a multitool is just the first responder tool.

For a year, it stayed in the organizer or my rucksack, as the thing is heavy. I tried to EDC it in my pocket, but after a few days it went back to the confines of my bag. The thing is simply not pocket friendly. It sags in my pocket when I carry it around. And it ate up a lot of space inside my pocket thanks to its wide profile. Worse, the thing imprints. I did try using its hard sheath and strapped it in my belt. Bad idea! In the place where I work, the irony is some employees tend to fear knives and anything they perceived as “weapons” even though they work in an environment that requires tools. The large shiny multitool inside a holster tend to attract unwanted attention.

Nevertheless, when it comes to light and medium tasks, it performed as intended. I love how well the pliers pulled out those nails and staples without breaking. The knives, both serrated and plain did their jobs well. During a hiking trip, I got the chance to test the saw when we needed to fashion a hiking pole. The piece of bamboo was no match to the multitool saw. The screw drivers and the bits worked fine and the same can be said to the other tools.

By the way, in case you are wondering I polish my tools which is why it stayed shiny.

Yet, tool deployment was always an issue. Unlike my new Leatherman Sidekick, most of the Ganzo tools are kept outside. This seems to be a plus but trying to pull out some of the tools were a real pain to the fingers. The tools are so stiff that I must use a mini pry bar sometimes. I also don’t like how the scissors were kept. Unlike most multitools, the scissors are kept open when folded, a good way of injuring yourself when you are not careful. And as for the wire cutters in the pliers, well let’s say that you are better off with real wire cutters.

I could ignore those flaws, yet one glaring issue made me retire this multitool for good.

And Then the Screws Became Loose

It’s a multitool. I never subjected it to overly heavy use. Yet simply opening and closing the multitool seems to loosen the pivot screws.

I first saw it one day when I’m cleaning my tool. I noticed how the play between the multitool arms are getting worse. Then I saw a couple of floating pivot screws. They are half-way out, though at first, I never really minded it and just tightened the screw. I thought I have moved on, but the problem persisted. After some tests, I confirmed my hunch. The mere opening and closing of the multitool is loosening the screws. Maybe I should superglue the screws to solve the problem. I was about to that when one day, I discovered that one of the screws was already missing.

Too bad, I was happy with my multitool. It performed well for the price, yet I couldn’t ignore this simple quality issue. Maybe I should have superglued the screws, but then those screws shouldn’t loosen like that in the first place.

I’m not sure if I got a lemon, but I couldn’t trust my life on a multitool that would lose a part with simple use. With a screw missing, I decided to get a new multitool, and I chose the Leatherman Sidekick. It never had tools like awl or scissors, but I never needed them in the first place. The Leatherman Sidekick is better than Ganzo in many ways, from being pocket friendly to insanely durable. I say that my EDC kit improved greatly with my Leatherman.

Nevertheless, if you are new in EDC, Ganzo multitools might be the best fit for you. You will learn a lot from owning this multitool. From caring your tools, to knowing the tools you would need (I realized that I have little use for the awl). I wish that Ganzo will fix the pivot screw issue though. Because of that, the Ganzo multitool went from budget, to cheapo EDC item.

If you want to get your Ganzo multitool, just check the link below: 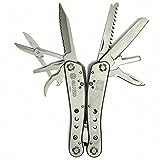