Even though they finished with a winning record, there was nothing for Washington to celebrate in 2016.

Despite throwing for a franchise record 4,917 yards along with 25 touchdowns, quarterback Kirk Cousins always registered 12 interceptions, most of which came at the worst times, such as a disastrous pick in the season finale against the Giants that ultimately ended their season. Undrafted rookie running back Rob Kelley supplanted Matt Jones as the starter midway through the season since Jones gained a reputation as a fumbler. Tight end Vernon Davis still showed he had enough in the tank when stepping in for an injured Jordan Reed. Wide receivers DeSean Jackson and Pierre Garçon both topped 1,000 yards receiving and both were in the last year of their deals. Jamison Crowder established himself as one of the league's best slot receiver as well as a top notch punt returner. The offensive line struggled all year opening up running lanes, but they held up great in pass protection as Cousins was only sacked 23 times.

The defensive line didn't scare any opposing offenses as no one on the unit demanded a double team. Inside linebackers Mason Foster and Will Compton are good players but they lack the speed necessary for the position. Outside linebackers Ryan Kerrigan and Trent Murphy combined for 20 sacks on the year, while Preston Smith was a disappointment as a pass rusher. The addition of Josh Norman stabilized the cornerback group, but the safeties were a mess. The team relied on three converted cornerbacks to start at safety and it really affected the passing defense.

The team sent five players to the Pro Bowl in quarterback Kirk Cousins, tight end Jordan Reed, tackle Trent Williams, guard Brandon Scherff, and outside linebacker Ryan Kerrigan. Reed missed four games with two separate injuries, but is one of the most dynamic tight ends in the league when healthy. Williams missed four games due to a substance abuse suspension but still made his fifth Pro Bowl. Scherff made his first trip after a solid sophomore season. Kerrigan battled through multiple injuries all year, but still managed to finish with 11 sacks.

The rookie class dealt with injuries and poor play for much of the season. Wide receiver Josh Doctson played in just two games before an Achilles injury ended his season. Inside linebacker Su'a Cravens spent the year as a backup in the middle but is expected to be starting at strong safety next year. Cornerback Kendall Fuller struggled as the team's nickel corner and was benched late in the season.

Going 8-7-1 in his second season, head coach Jay Gruden has to get the defense on the same level as the offense if they expect to going anywhere in the playoffs.

On January 6, the Redskins fired defensive coordinator Joe Barry. He was replaced by the team's outside linebackers coach Greg Manusky.

With the 17th overall pick going into the draft, the Redskins needed to fill holes at key spots. Primarily at wide receiver, defensive end, and safety.

The Redskins lost Pierre Garçon and DeSean Jackson to free agency and Josh Doctson still has health concerns. With just Jamison Crowder, the team needs to replace the depth at wide out.

The team let three defensive linemen walk in free agency and they've haven't done much to address the issues at the position for years. Adding a pass rushing defensive end will help out a lot.

DeAngelo Hall, Will Blackmon, and Donte Whitner were all on the wrong side of 30 last year. Su'a Cravens is moving to strong safety this season but Washington still needs a young centerfielder to play alongside him.

On draft day, Washington selected Alabama defensive end Jonathan Allen with the 17th overall pick. Allen was viewed as the top pass rushing defensive lineman in the draft but has major injury issues with his shoulder over the past three years.

The Redskins also notably drafted Alabama linebacker Ryan Anderson in the second round and Oklahoma running back Samaje Perine in the fourth. Anderson has the attitude and hands teams look for at outside linebacker but maturity is an issue with multiple incidents while at Alabama. Perine left Oklahoma as the school's all time leading rusher but lacks a second gear to finish off long runs.

Given the gains and losses in free agency, I don't see much changing in Washington.

For the second straight season, Kirk Cousins will be playing under the franchise tag and you have to wonder if the team has really any desire to sign him to a long term deal. Robert Kelley has a knack for avoiding negative runs and breaking through tough tackles which will help him as the starter going forward. Signing Terrelle Pryor and Brian Quick fills the roster spots of DeSean Jackson and Pierre Garçon but they aren't the caliber of those two players. The offensive line should remain solid in pass protection but I don't believe they've done enough to improve their run blocking.

Adding Jonathan Allen gives the team the pass rusher they needed on the defensive line but they have to wonder if his shoulders are going to hold up after three injuries the past three years. Ryan Kerrigan and Trent Murphy are a nice pair on the outside and Zach Brown looks to be an upgrade in the middle with Mason Foster. The secondary still appears to have a lot of holes as the team failed to add depth at cornerback, nickel corner, and free safety.

The way I see it, the NFC East title is going to come down to the Cowboys and Giants. But Washington will likely be battling Philadelphia for the last wildcard spot.

Best record they can hope for: 9-7

How will the Redskins fair this season? 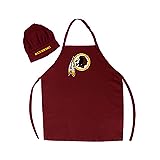