Pilcher Park and How it Came to Be 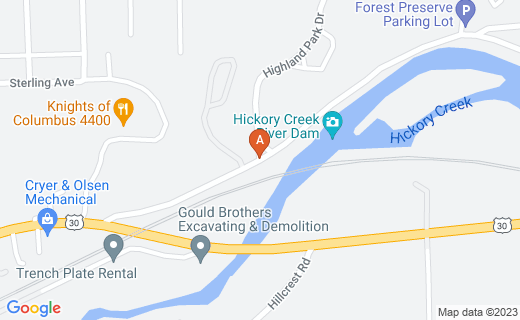 Who Was Harlow Higginbotham?

Harlow Higginbotham was a businessman born in 1838 on a farm near Joliet, IL (probably what is now New Lenox, IL), that his family settled in the early 1800's. The family came from New York to settle and farm this fertile land, having purchased it directly from the government.

In 1862, Harlow volunteered for the Civil War and served until 1865. At that time, he began working for Field, Leiter and Co, which would later be known as Marshall Field and Co. He had many business pursuits and was a pivotal person in the creation of the World's Columbian Exposition in 1893.

He built a beautiful mansion in Joliet, near Pilcher Park at what is now the corner of Cherry Hill Drive and Route 30 that was collaborated on and commissioned to famous architect and planner Daniel Burnham, with whom he collaborated with on the Columbian Exposition.

Due to spending most of his time in Chicago, the mansion sat barely used. It was reported to still have been standing in 1940, but in severe disrepair. Vandals had stripped the property of anything of value and it seems that the Higginbotham estate/kin had little interest in restoring it.

All that is left is some ruins, the pond that was in the back of the property and the stone fence that separated the property from Mound Cemetery, which is also now abandoned.

Who Was Robert Pilcher?

Robert Pilcher was a local Jolietan and business man who owned a paper mill. He was also a self-described naturalist. He purchased the Higginbotham land in 1920 and then donated it to what is now the Joliet Park District. At the time of the donation, the JPD didn't exist. He was instrumental on getting it founded in 1925. When he donated the land he is quoted as saying there was one condition attached to the donation: "that it be left in its wild and natural state except for necessary improvements".

I believe he would be proud today of what the park looks like and has to offer to visitors, because of his generous donation. A statue of Robert Pilcher stands near the Nature and Visitor Center as a reminder of his love of nature and the importance of keeping resources like this available to the public.

If you are a nature lover, there are many things you can enjoy at the park:

What is your favorite activity to do when you visit forest preserve sites?

Up until a few years ago, a large Artesian Well was present in the park. Nicknamed the Flowing Well, for 70 years people from all over the Joliet area would come weekly to fill their jugs with the mineral-rich waters. Many still talk about the well and how they think it was the best water available.

In 1998, the well was decommissioned and dismantled because of a leak that was considered unrepairable. There were reports that funding had been donated by the Pilcher family to repair the old well or drill for a new well, but that somehow fell away and never came to fruition to the dismay of many Joliet residents.

The well remains capped to this day. If you are hiking the trails and want to see where it used to be, it is located near the Children's Garden area, behind the old horse barn.

Hickory Creek runs right through Pilcher Park, with it's deepest (and in my opinion best area for fishing) right before the dam, near the entrance off of Route 30. There you will find a good variety of fish. Some of the fish reported to be in the creek are Catfish, Carp, both large and small mouth Bass, Crappie, Sunfish and Rainbow Trout. The depth of the river varies depending on rainfall. Your best times for catching anything is in the early morning or about an hour or two before sunset. Those are the times I personally have witnessed the most activity. In addition, the fish seem to almost exclusively live on the array of surface bugs on the river. They were not interested in any of our bait with exception of night crawlers and meal worms, so if you plan on going there to fish, make sure you are bringing the right bait.

Even if your fishing excursion is a bust, you will have plenty of wildlife there keeping you company and entertained. There are several species of water birds, including Cormorants, Egrets, Great Herons and several varieties of ducks. Cedar Waxwings are plentiful in the morning and evening hours, flying through the air catching mosquitoes. Dragonflies and Damselflies are plentiful as well. I frequently see Beavers, Woodchucks and River Otters there also.

Pilcher Park is a good learning example of a diverse natural system of plants, wildlife and water systems. Aside from Hickory Creek, which runs through the park, there are several areas of wetlands.

Birding folks will enjoy the assortment of birds that like to frequent the park. Those who are into horticulture will see many woodland plants, some of which provide important functions in nature; i.e. the swamp milkweed that supports all lifecycles of the Monarch Butterfly.

The landscape is constantly changing with each season, which gives visitors like me reason to visit often.

Located off Gougar Road on the eastern edge of the park is a small, Italian Renaissance styled conservatory. Built in the early 1900s by Burnham and Company, it hosts lovely Victorian style gardens outside, with tropical and cacti gardens inside. The themes are constantly changing with each season. Admission is free, but donations are encouraged. The Conservatory hosts weddings, school field trips and plant sales throughout the year. It is a little gem of a place that is about a 1 mile hike from the Nature Center. Or you can just drive there. They have a lot to park in. 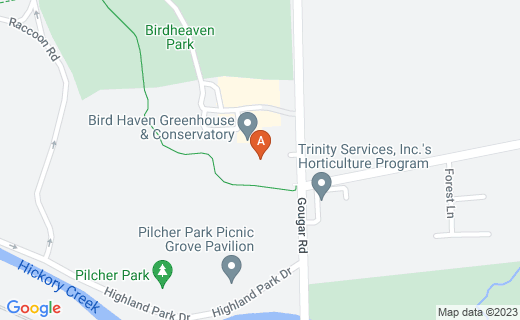 A dam was placed inside the park, just near the entrance off route 30 in the 1920s, about the time that Robert Pilcher donated the land. The original intent was to create a place where people could swim and boat inside the park. Both of those things are no longer allowed in the park.

Late last year, the Illinois Department of Natural Resources with the Joliet Park District, proposed the dam be removed. There is controversy on both sides of this issue. Some say the dam should stay because that was the intent of Robert Pilcher when he gave the land over to the district. Others think removing the dam would bring the creek back to its natural state.

The IDNR is currently doing a study to see what is the best course of action to take regarding this issue. Removing it will cost money and right now nothing has been proposed on how it would be paid for should it get approved for removal.

Since it is so close to my house, I love having access to this great park. It is a great place to take in a stroll or walk your dogs. I always see many people out walking the trails, including families with their children. I think it is an important resource to have access to, especially in a large city that may have too many hardscapes and not enough places in nature.

If you find yourself driving Route 30 (The Lincoln Highway), stop by the park for a bit and enjoy the view!

For more information, including trail maps:

Let me know how I'm doing! Was this hub interesting?